The filly was bred by Hyde Park Stud and was a 60,000gns breeze-up purchase

Aclaim became the latest first-season sire to underline his credentials when Cachet struck in eyecatching fashion at Newmarket for the in-form George Boughey team.

The promising filly was bred by Hyde Park Stud and was sold to the Highclere Agency for 60,000gns at last month's Tattersalls Craven Breeze-Up.

Out of the placed Teofilo mare Poyle Sophie - a half-sister to four winners - Cachet put the six-furlong novice fillies' contest to bed by a comfortable five and a half lengths from Godolphin's Dark Angel filly, Before Dawn. In dong so, she earned quotes of around 8-1 for the Albany Stakes at Royal Ascot next month.

Boughey said: "She's a lovely, big, scopey filly and her work has been good. She has been working away with other winners and older horses that have been running well.

"This doesn’t come as huge surprise as she is a filly that is quite near the top of the pile at the moment. We will speak to Harry [Herbert] but she looks like an Albany type of filly." 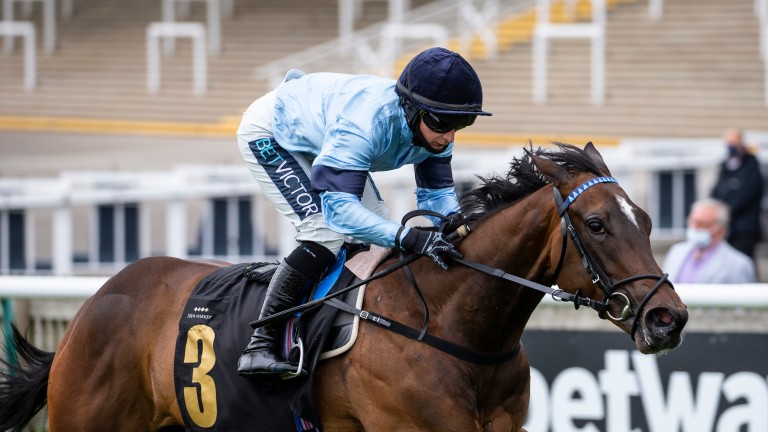 He added: “She came from the Tattersalls Craven Breeze-Up Sale and if she wins at Royal Ascot there is a £125,000 bonus."

Aclaim, a son of Acclamation and fittingly a resident at the nearby National Stud, was a €130,000 purchase from the Goffs Orby Yearling Sale, when selling to Stephen Hillen from Swordlestown Stud.

Bred by Dermot Farrington and Canning Downs, he proved a top-class performer for Martyn Meade with wins in the Group 1 Prix de la Foret, Park Stakes and Challenge Stakes - both Group 2s - among his seven career triumphs.

The eight-year-old is the first foal out of the stakes-placed Danroad mare Aris and is from the family of Irish 1,000 Guineas and Moyglare Stud Stakes heroine Again. Aris' Frankel colt sold to Roger Varian for 360,000gns at last year's Book 1 Tattersalls October Yearling Sale.

Aclaim, who was also runner-up to Brando in the Prix Maurice de Ghees, stands at the Newmarket operation for a fee of £9,500 and has 113 first-crop juveniles to represent him this year.

FIRST PUBLISHED 2:00PM, MAY 15 2021
She has been working away with other winners and older horses that have been running well