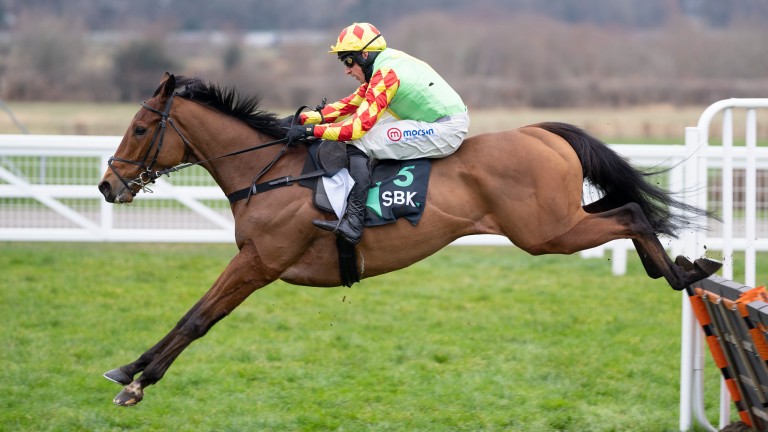 It had been a good start to the weekend for We'll Go Walking as her son Metier bounced back to form on day one of the Winter Million meeting, and she could have another exciting jumps prospect in Doctor Parnassus, who spreadeagled the field on his hurdles bow at Ascot on Saturday.

Just under 24 hours on from Mastercraftsman's son Metier's brave success in the valuable Sovereign Handicap Hurdle at Lingfield, his Flat-bred half-sibling Doctor Parnassus announced himself on the jumps stage with an impressive ten-length success in the opening juvenile hurdle.

Bred by Knockainey Stud, the son of Make Believe sold to Jason Kelly Bloodstock for €20,000 at the Goffs Orby Yearling Sale, and then made 66,000gns to Ryan Mahon when offered by Baroda Stud at last October's Tattersalls Horses in Training Sale.

The four-year-old, who now represents the Dan Skelton yard, raced ten times on the Flat for David O'Meara, finishing placed five times, but seems to have found his niche over obstacles.

The @coolmorestud @grangestud Flemensfirth 7yo was bred by Robert McCarthy and sold by The Beeches to SB Racing #Thenewbest pic.twitter.com/Qw4dc6o13t

The SBK Betting Podcast Juvenile Hurdle has an excellent recent record when it comes to Flat-bred or -raced performers, with the last two winners Tritonic and Goshen going on to Graded success, while further back on the honour roll are the likes of Ascot Chase winner Balder Succes and Scilly Isles Novices' Chase victor Top Notch.

Doctor Parnassus is the second foal out of the Group-placed We'll Go Walking, a winner for Johnny Murtagh and out of a full-sister to champion two-year-old and top sire Teofilo.

We'll Go Walking, by Authorized, is a full-sister to Constancio, a four-time winner over hurdles for Donald McCain who landed his most recent start at Musselburgh in October, while further back in the family is Listed winner Graduated and the high-class War.

We'll Go Walking has already produced a Grade 1 winner in last season's Tolworth Hurdle scorer Metier, who won once on the Flat for Andrew Slattery before joining Harry Fry's team, for whom he did the honours at Lingfield on Friday.

The 12-year-old We'll Go Walking has a two-year-old Lope De Vega colt who was exported to Australia after selling from Knockainey Stud for 100,000gns at the Tattersalls October Yearling Sale, as well as a yearling colt by Coolmore's 2,000 Guineas hero Magna Grecia.

She is carrying to Ballylinch Stud's exciting New Bay this time around.

Serenading warming the hearts of astute breeders with her progress