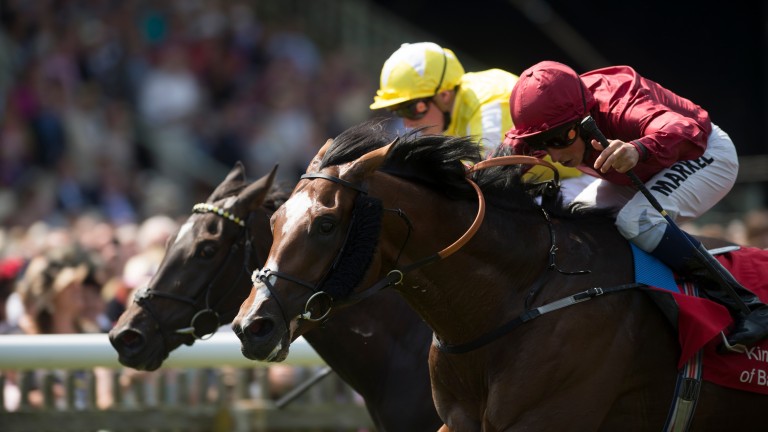 Feel Like Dancing, a Group 3-winning son of Galileo who has been stationed at Haras du Lion in France since retirement in 2014, has been acquired to stand at Ronnie O'Neill's Whytemount Stud in County Kilkenny.

The stallion’s first crop of four-year-olds, numbering 26 according to France Galop, has delivered four winners including Falbala Des Mottes, a dual scorer and useful performer for Francois Nicolle, and Feel Des Mottes, who took a Killarney maiden hurdle for Elizabeth Doyle in May.

Feel Like Dancing has 23 three-year-olds to bat for him, and they already include Galilea Des Mottes, a winner at Dax last month for Nicolle.

He also has 43 two-year-olds and 45 yearlings in the pipeline.

Feel Like Dancing was bred by Lady Bamford from her Darshaan mare Maid Of Killeen, who had earlier distinguished herself as the dam of Cheveley Park Stakes and Coronation Stakes winner Indian Ink.

He made five starts for John Gosden, doing best when running second to Leading Light in the Queen's Vase at Royal Ascot and landing the Bahrain Trophy on his next start.

Feel Like Dancing will stand alongside Affinisea, the Sea The Stars three-parts brother to Soldier Of Fortune, and Valirann, a Group 2-winning son of Nayef, at Whytemount Stud, which found fame as the home of the late rags-to-riches stallion Stowaway.

The deal to bring the horse to Ireland was brokered by Richard Venn.

FIRST PUBLISHED 6:19PM, OCT 26 2019
Feel Like Dancing will stand alongside Affinisea, the Sea The Stars three-parts brother to Soldier Of Fortune, and Valirann, a classy son of Nayef

No Risk At All fee increased while Technician adds strength to Montaigu roster 'The long and short of it is they have to win - if they don’t, you're buggered' $750,000 Empire Maker colt tops blockbuster Fasig-Tipton second session Record Autumn Horses in Training Sale trade topped by 700,000gns Grocer Jack Yearlings added to Goffs Autumn sale by Australia, Churchill, Mehmas and more 'I'm still buzzing!' - Classic hopeful Hannibal Barca sells for 500,000gns