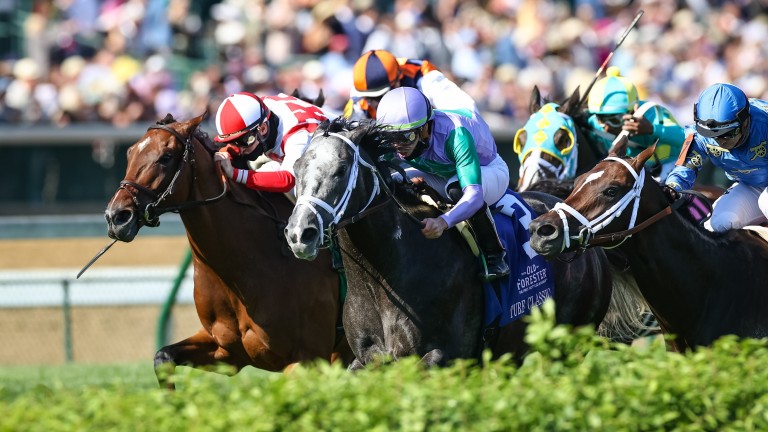 A gelded son of Kingman, the four-year-old had provided his sire with his third individual top-level winner when landing the Hollywood Derby at Del Mar in November.

Domestic Spending was a 300,000gns purchase from Highclere Stud at Tattersalls Book 1 in 2018 and has a very progressive profile in the US.

Highclere's Jake Warren said: "It was a pleasure to be involved with Domestic Spending and we are proud to be part of his story but enormous credit has to go to his breeder Saeed Manana and the team at Rabbbah, spearheaded by Jono Mills, who did such an excellent job in breeding and rearing him.

"We were privileged to just have to put the finishing touches to him when he came to be prepped for the sales at Highclere Stud.

“He comes from a lovely female family that has produced a lot of black type horses so when you put Kingman in amongst that, it’s no surprise that you get a horse like Domestic Spending."

Warren, who also prepped and sold another top-class son of Kingman in St James's Palace and Prix Jacques le Marois hero Palace Pier, told GBRI: "He was an incredibly straightforward horse to prep. You tend to know the ones who find things very easy and he was one of those horses.

"He had a great mental attitude and handled the sale very well. He had a huge amount of class and quality and Chad [Brown] and Mike [Ryan] loved him from the moment the saw him."

FIRST PUBLISHED 12:29PM, MAY 2 2021
He was an incredibly straightforward horse to prep. You tend to know the ones who find things very easy and he was one of those horses