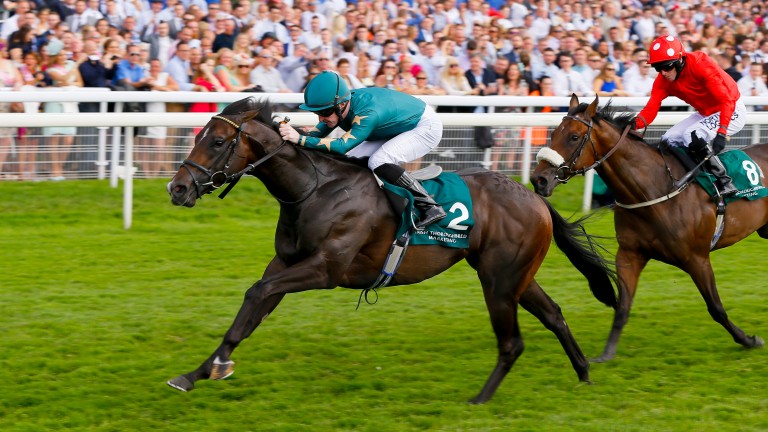 A legal row over a multi-million euro insurance policy covering Ajaya, a son of Invincible Spirit who stood for two seasons at Rathbarry Stud in 2017 and 2018, came before the Irish Commercial Court on Monday.

The court heard that Ajaya, who landed the 2015 Gimcrack Stakes at York, had been assessed in 2018 by an equine medicine consultant as being permanently infertile.

The owners allege a breach of contract after the group of insurers  failed to pay out on an insurance policy covering the horse.

The plaintiffs are seeking an order that the defendants specifically perform the insurance contract entitled the 'Stallion Permanent Total Disability Extension'.

They also seek an order requiring the defendants to pay the owners a fair market value for the horse, and further damages for alleged breach of contract, negligence and breach of duty.

Ajaya stood at Rathbarry Stud in Fermoy, County Cork, for two seasons in 2017 and 2018, and shuttled to Chatswood Stud in Australia - where his sire Invincible Spirit previously stood - in the second half of 2017.

The leasing of Ajaya to Chatswood saw the insurance policy revised, meaning he was then insured for €3.12m.

He successfully impregnated 44 mares out of 63 in his first year at Rathbarry.

According to the Australian stud book, Ajaya covered 61 mares - of which 18 have registered foals - at Chatswood in 2017.

Ajaya only managed to get one mare in foal of the 19 he covered during his second season at Rathbarry in 2018.

It is claimed that while the horse showed good libido, his fertility had declined to the point the stallion was non-viable in a commercial sense and as close to total infertility as ever seen.

The plaintiffs sought payment out of the policy but claim the defendants have declined to pay the owners their entitlements.

The defendants, while not formally refusing the indemnity, have alleged the owners failed to comply with relevant conditions of the policy and failed to disclose all material facts. They also denied the horse is permanently infertile.

The case was admitted to the Commercial Court list by Mr Justice Robert Haughton on Monday.

The judge was told by Cian Cotter BL, representing the owners, that it was hoped the dispute could be resolved through mediation.

The case has been adjourned until October.

Matt Houldsworth on his route into the industry, breeze-up sales and the Guineas

Henri Bozo tells us about Sottsass, Magic Wand and the next Monceaux marvels

FIRST PUBLISHED 5:32PM, JUL 23 2019
The owners allege a breach of contract after the group of insurers failed to pay out on an insurance policy covering the horse