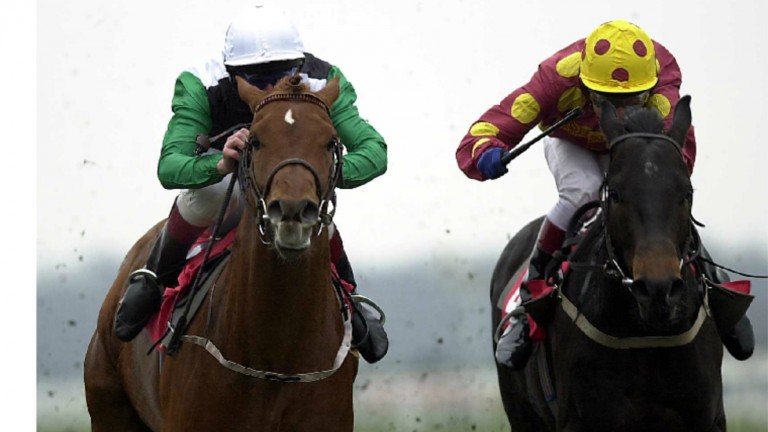 Orientor (right) was twice a Group winner before becoming a stallion
Grossick Racing Photography
1 of 1
By Tom Peacock 11:30AM, MAY 6 2021

Orientor, the mightily popular sprinter from the start of this century who produced some fast horses himself as a stallion, has died aged 23 at Sidehouse Farm Stud in Scotland.

Bought by trainer Jim Goldie himself for 12,000gns as a yearling at the St Leger Sale, the son of Inchinor raced for eight seasons and became a stalwart of high-class handicaps and Group events.

His career produced five wins from 79 starts including a pair of Group 3s in the Chipchase Stakes at Newmarket and what is now known as Sandown's Coral Charge, while he was also fourth in the Haydock Sprint Cup.

With a heavy heart I’m sad to report the passing of Orientor. The most wonderful horse, he’ll be dearly missed . pic.twitter.com/5pa4lFVKag

Orientor, who was a half-brother of William Haggas' Victoria and Royal Hunt Cup winner Yeast, had a couple of brief homes elsewhere but he has spent the majority of his career at Alex Bogle's Sidehouse in Ayrshire. His fee, which had become listed at private this year, had previously been £1,500.

Goldie has been a staunch supporter of Orientor's progeny and trained the best of them in the prolific Jack Dexter, also a winner of the Chipchase Stakes. The likes of Tor, Orient Class, Oriental Lilly and Primo's Comet have chipped in a heap of successes between them.

Goldie also paid tribute to his old favourite through his Twitter account, saying: "We’re so sorry to hear of the passing of Orientor or 'Olly'. He was a pleasure to work with and probably the best we’ve trained."

FIRST PUBLISHED 11:30AM, MAY 6 2021
Orientor had a couple of brief homes elsewhere but he has spent the majority of his career at Alex Bogle's Sidehouse in Ayrshire