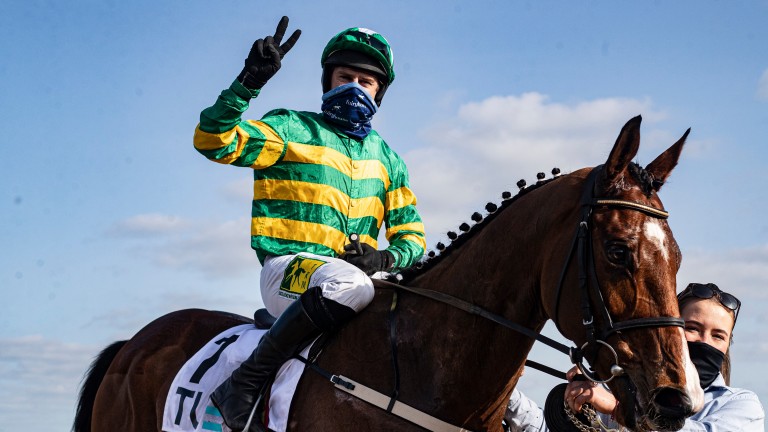 It was business as usual for Willie Mullins with the first three home in Fairyhouse's Underwriting Exchange Gold Cup but for the lesser-known Indian Daffodil it was a chance to shine as his son Janidil led his rivals home.

Indian Daffodil - by the Niarchos family's Prix du Jockey Club and Lupin winner Hernando - was bred by Ecurie De Meautry and has produced a succession of small crops from various French studs - he currently stands at Elevage Sebastien Berger.

The 16-year-old was owned by Baron Edouard De Rothschild and trained by both Jean-Claude Rouget and Stephane Wattel, scoring six times including the Group 3 Prix Daphnis. Also third in the Prix Andre Baboin and second in two Listed contests, Indian Daffodil retired to stand at Haras National de Cercy La Tour in 2012.

The JP McManus-owned seven-year-old, bred by Hubert and Michel Langot, was Listed-placed over hurdles for Guy Cherel in France before swapping to Mullins' yard in November 2018.

A three-time winner over hurdles, the gelding was a respectable fifth behind the brilliant Monkfish in last year's Albert Bartlett Novices' Hurdle and made an impressive winning chase debut at Naas last November.

It had not gone quite so smoothly since, with a third in the Faugheen Novice Chase behind subsequent Mares' Chase victress Colreevy before falling in the Flogas Novice Chase at the Dublin Racing Festival. However, his Fairyhouse success was a deserved top-level win for himself and his unheralded sire.

FIRST PUBLISHED 6:23PM, APR 4 2021
The JP McManus-owned seven-year-old, bred by Hubert and Michel Langot, was Listed-placed over hurdles for Guy Cherel in France