Date with Too Darn Hot awaits as Frankel Light fetches €1.3 million at Arqana 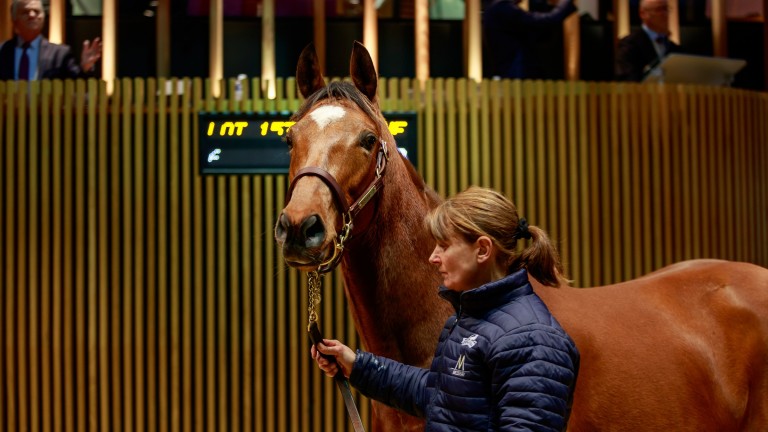 Three-time Group 1 winner Too Darn Hot can count on strong home support as he embarks on his stallion career at Dalham Hall Stud next year, with his owner-breeders Andrew and Madeline Lloyd-Webber spending €1.3 million to add Frankel Light to their broodmare band during Saturday's opening session of the Arqana Breeding-Stock Sale.

"She's been bought for Watership Down Stud and she'll go Too Darn Hot next year," said the stud's general manager Simon Marsh, who stood alongside Charlie Gordon-Watson as the bloodstock agent signed the docket.

Described by auctioneer as Ludovic Cornuel as "a real collector's item", Frankel Light was bred and raced by Rashit Shaykhutdinov, who offered the filly at Book 1 of the Tattersalls October Yearling Sale in 2016 but retained the well-related daughter of Frankel at 360,000gns.

The filly was put into training with Francis-Henri Graffard, for whom she won two of her four starts, including the Listed Prix la Sorellina over a mile at La Teste de Buch. She is the fifth foal of the German Listed winner Mambo Light, whose other foals include the Australian Group 3 scorer Le Juge, while further back this is the family of Chimes Of Freedom, Aldebaran and War Of Will. 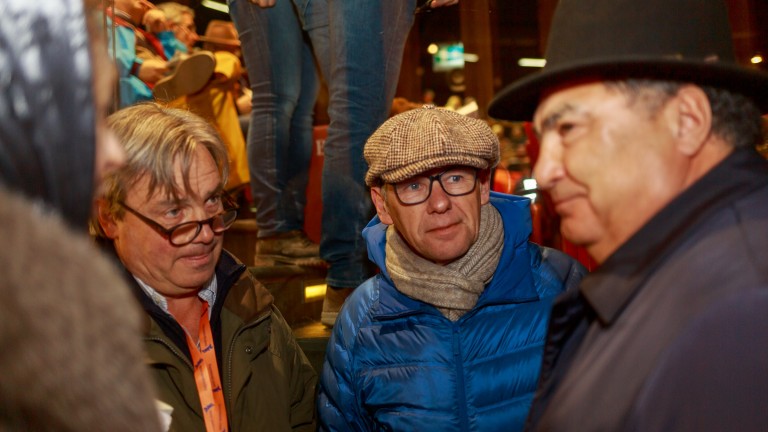 Marsh added that Frankel Light would not be the only Watership Down mare to visit their celebrity graduate. He said: "We're absolutely delighted to get this mare, it's a fantastic family and it's just what we came here to buy. We don't know the exact numbers at the moment but we'll be sending around half a dozen mares to Too Darn Hot next year."

Too Darn Hot, who retired from racing having won the Dewhurst Stakes, Prix Jean Prat and Sussex Stakes, is due to stand next year at a fee of £50,000.

Frankel Light's dam, Mambo Light, also came under the hammer during Saturday's session, but was bought back at €840,000.

Phoenix Of Spain team rise up

A little over two years ago Geoffrey Howson and Matthew Houldsworth secured a Lope De Vega yearling for 220,000gns on behalf of Tony Wechsler and Ann Plummer. That colt was, of course, Phoenix Of Spain, the wide-margin winner of the Irish 2,000 Guineas who has been added to the Irish National Stud's stallion roster for 2020.

Howson and Houldsworth were back in action at Arqana on Saturday and on the hunt for a broodmare prospect for Plummer and Wechsler, with the couple keen to support their former charge in his second career.

The agents honed in on Jellicle Ball, a winning and Group 3-placed daughter of Invincible Spirit consigned by Haras de Saint Pair, and the pair saw off Japanese interests with a bid of €510,000 to secure her. The seven-year-old, who produced a Frankel filly for Watership Down Stud earlier this year, was offered in foal to Siyouni. 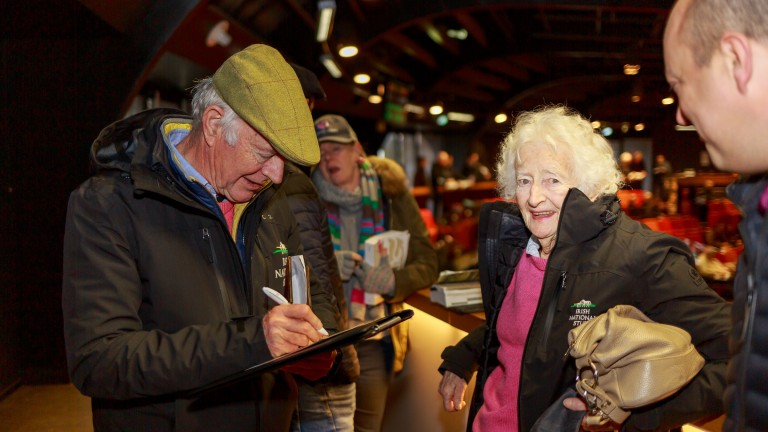 Geoffrey Howson and Ann Plummer with the docket for Jellicle Ball
Zuzanna Lupa
Plummer was in attendance to inspect her purchase, and when asked what appealed about Jellicle Ball she said: "I like her pedigree, her conformation and the covering sire. You need a pretty head too! I used to breed some years ago but she's my only mare at the moment."

Howson added: "Invincible Spirit is becoming a very good broodmare sire now, that's borne out by his statistics. Matthew and I saw her a few times and thought she was lovely, and the Irish National Stud team agreed with us."

Phoenix Of Spain is being introduced to breeders at a fee of €15,000.

New Zealand-based agent Dean Hawthorne ventured to Deauville 12 months ago to purchase two daughters of Galileo for a cumulative €560,000. He was back at Arqana on Saturday and went to €480,000 for Fleeting Fancy, another daughter of the perennial champion sire who was offered in foal to rising star sire No Nay Never.

"We love Galileo mares, we've been accumulating them for a while now and we bought a few here last year as well," said Hawthorne. "She's got a lovely early covering to No Nay Never and is carrying a colt. It's a beautiful family and one that's very current, there's a lot going on close up with horses still racing."

Sold through Charles Briere's Fairway Consignment, the four-year-old is out of Just Pretending, a Group 3-winning daughter of Giant's Causeway who also finished third to Chicquita in the Irish Oaks. Fleeting Fancy is a sibling to two stakes performers, the Listed-placed Visage and the Group 3-placed Persia.

Hawthorne continued: "She's a beautiful mare, too. I thought she was the pick of the Galileos here; she's got that lovely shoulder, rein and length that we like down under. She'll head to Australia and should be in the southern hemisphere by next September. We've got a big breeding operation in Australia called GSA Bloodstock, we probably have 80 to 100 mares going to stud next year.

"We've got ten or 12 northern hemisphere mares in there who've all gone down under and been covered by top sires. Galileo is turning into a phenomenal broodmare sire; you can send anything to him and get a proper horse."

Team Howson and Houldsworth had earlier clashed with the BBA Ireland's Eamonn Reilly as Roystonia took her turn in the ring, and it was the latter party who emerged on top with a bid of €360,000 delivered from the bottom of the stairs by the rostrum.

The four-year-old daughter of Redoute's Choice, bred by Al Asayl Bloodstock when the late Australian great shuttled to the Aga Khan's Haras de Bonneval in 2014, is the first foal out of a Galileo sister to Irish 2,000 Guineas hero Roderic O'Connor.

Roystonia ran six times for Al Asayl and Hugo Palmer, winning a Chepstow novice stakes and gaining black type when third to True Self in the Listed Beckford Stakes on her final outing. 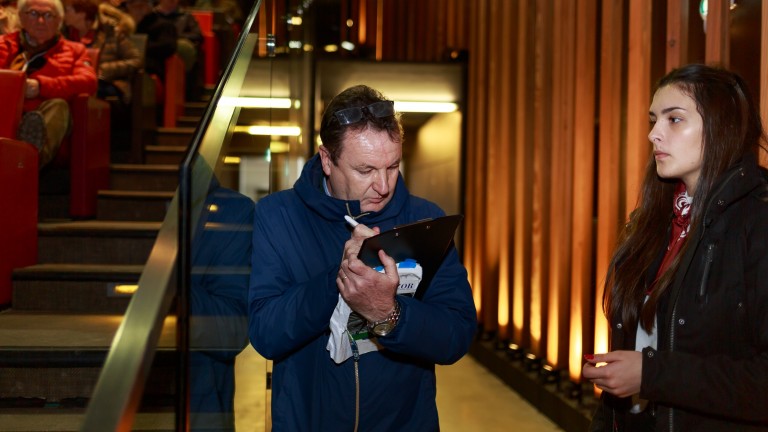 Eamonn Reilly: "Obviously I like the pedigree"
Zuzanna Lupa
"She's for an undisclosed client of the BBA Ireland's who breeds in Ireland," said Reilly of the Haras d'Etreham-consigned lot.

"Obviously I like the pedigree, she's a sister to a very good horse in Roderic O'Connor and from a deep family, and I really liked the mare herself. I'm a fan of the covering sire, Almanzor, too. She'll head back to Ireland."

The Arqana Breeding Stock Sale continues on Sunday at 10am.

FIRST PUBLISHED 7:43PM, DEC 7 2019
Galileo is turning into a phenomenal broodmare sire; you can send anything to him and get a proper horse