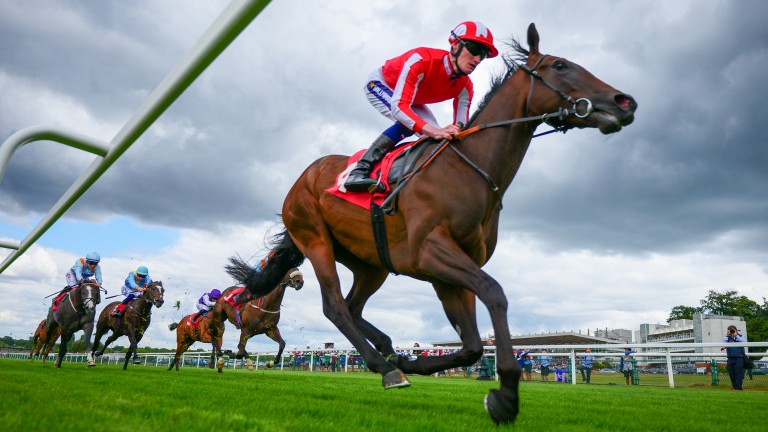 Rocket Rodney powers to success in the Dragon Stakes at Sandown
Mark Cranham
1 of 1
By Kitty Trice UPDATED 7:31PM, JUL 4 2022

Sometimes the stars align when it truly matters and for construction project manager Chris O'Dowd, Rocket Rodney's impressive Dragon Stakes success was further proof his venture into bloodstock has been more than worthwhile.

The two-year-old son of Dandy Man has come a long way since being sold by Whitwell Bloodstock on behalf of O'Dowd to Corps Commerce for 18,000gns at Tattersalls' December Foal Sale in 2020.

The George Scott-trained gelding shed his maiden tag on his second start for Corps Commerce when romping to success at Goodwood by nearly five lengths, after which he was bought privately by Victorious Racing, the Bahraini enterprise overseen by Sheikh Nasser bin Hamad Al Khalifa.

A neck second to the highly regarded Little Big Bear in the Windsor Castle Stakes at Royal Ascot was a great start for the new owners, and Rocket Rodney matched his Racing Post Rating of 104 achieved there when winning the Listed Dragon Stakes at Sandown last Friday by a comfortable two and a half lengths.

O'Dowd, who is based in Hertfordshire and works in London, was introduced to racing by a friend and fell for the animals who captivate so many when buying a small share with his partner. 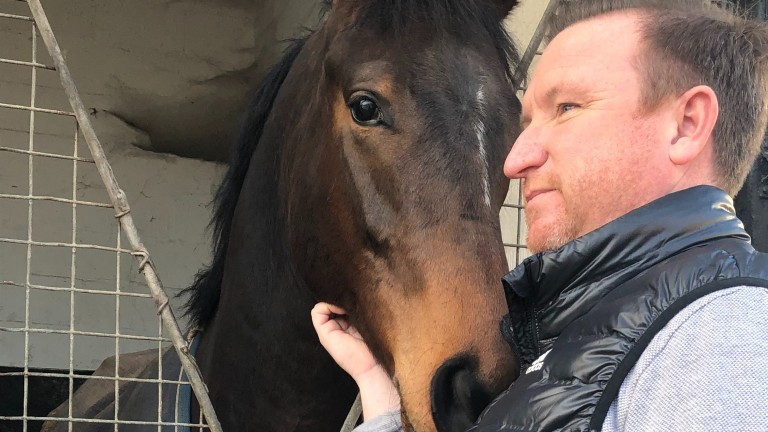 Chris O'Dowd: "As soon as you get involved with horses you fall in love with them!"
Chris O'Dowd

He said: "I went from zero to 22 [horses] in four years but I've reduced back down again – unfortunately, as soon as you get involved with horses you fall in love with them!"

Rocket Rodney's dam Alushta, a daughter of Sprint Cup winner Royal Applause and the Juddmonte-bred Warning mare Degree, was eighth on her sole start for Ed Dunlop and Pinar Araci Bas on the all-weather at Lingfield in December 2011.

Having been through the ring three times previously, including when selling from Yeomanstown Stud to Dunlop for 70,000gns at the Tattersalls Craven Breeze-Up in April 2011, Alushta, with Rocket Rodney at foot, caught O'Dowd's eye.

She is a sister to Mister Cosmi, who won the Richmond Stakes and was third in the Group 1 Gran Criterium for Mark Johnston, and to Sir Michael Stoute and Cheveley Park Stud's Ripon Two-Year-Old Trophy winner Auditorium, who was third in the Middle Park.

O'Dowd said: "I bought her and Rocket Rodney privately. She was the first mare I bought, and we were complete novices as we'd never done it before.

"We rented some land, about 12 acres just up the road from us, and he was at home with us for about two or three months before I sent him to another stud to be weaned and prepped while Alushta came home."

The then unnamed Rocket Rodney proved quick to worm himself into O'Dowd's affections, although one particularly exuberant incident proved painful.

O'Dowd said: "He was a complete character, although he did break my ribs once when I was leading him from one paddock to another and he double-barrelled me in my chest. I still loved him after that!"

What an outstanding performance in the Windsor Castle by Rocket Rodney by @BallyhaneStud Dandy Man we have the Dam & half sister at home ( picture below ) , Dam in foal to @newsellspark A’Ali let’s hope she breeds another couple of pic.twitter.com/sGSW2kaanf

Rocket Rodney aside, there is plenty else for O'Dowd to look forward to. Alushta has produced a "stunning" filly foal by Middle Park winner Charming Thought and is now carrying to Newsells Park Stud's new sire and multiple Group-winning sprinter A'Ali.

He said: "She was in foal to Outstrip when I bought her, but she lost the foal early on. We sent her to Mayson but she didn't take so she had the year off. I actually took her to the [Tattersalls December Mare] sales that year but I bought her back for 1,000gns.

"I put her back in foal to Charming Thought as her daughter by the sire won as a two-year-old, and she's now got a stunning filly. She is everything Rocket Rodney is, she's got the same temperament as him and loves attention."

O'Dowd's group of mares and youngstock is not limited to his black type-producing star Alushta, with a number any smaller breeder would be proud of.

He said: "I had one in training called My Boy Frankie, he wasn't very good but he finished runner-up second time out before he lost the love of it, and at the moment we're down to four mares, four foals, a yearling and a two-year-old."

What can Coolmore do to combat lack of credible stallion prospects in Europe?

FIRST PUBLISHED 4:30PM, JUL 4 2022
I bought her and Rocket Rodney privately, she was the first mare I'd bought, and we were complete novices as we'd never done it before