Punchestown festival on the cards for smart son of Stowaway 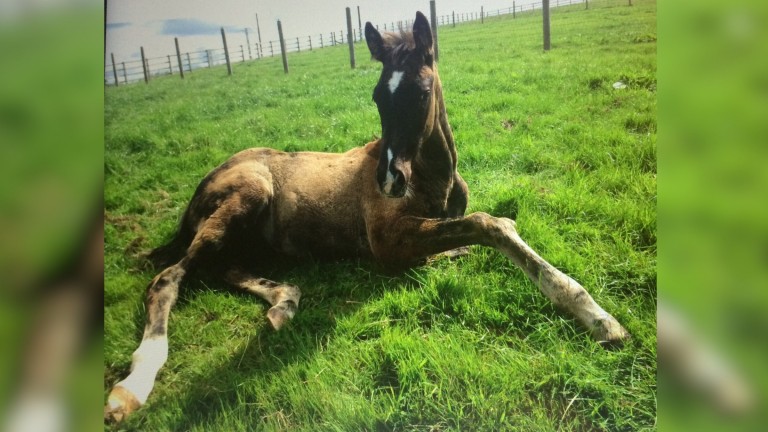 King Roland pictured as a foal on the grounds of Cafre Enniskillen
Sharon Woods, campus farm manager
1 of 1
By Ollie O'Donoghue 6:02PM, MAR 18 2019

As the National Hunt season enters its final few weeks, school is still not out for Cafre Enniskillen graduate King Roland, whose owner's aim each year is to field a winner at the end-of-season Punchestown festival.

Readers will be familiar with the red and green silks of Michael Masterson, whose other stars have included the ill-fated Neon Wolf, Balder Succes and Punchestown festival scorers Fletchers Flyer and Minella Awards.

King Roland stormed clear by 22 lengths on heavy going on his first start under rules at Uttoxeter in December and the smart son of Stowaway made it two-from-two in bumpers at Ffos Las last month, with the Harry Fry-trained five-year-old appearing to have a bright future.

"Staff and students have been really excited to follow the career of King Roland to date," says Seamus McAlinney, the college's head of equine.

"It's created a real buzz in the breeding yard, especially as we have three foals on the ground already this year."

King Roland is the first foal out of the unraced Robin Des Champs mare Kiltiernan Robin, who was purchased by the college with King Roland in utero for €20,000 at the 2014 Tattersalls Ireland February Sale.

The mare was foaled by the students that April, with King Roland becoming her highest-priced offspring when sold for €22,000 in the same sales ring that November. 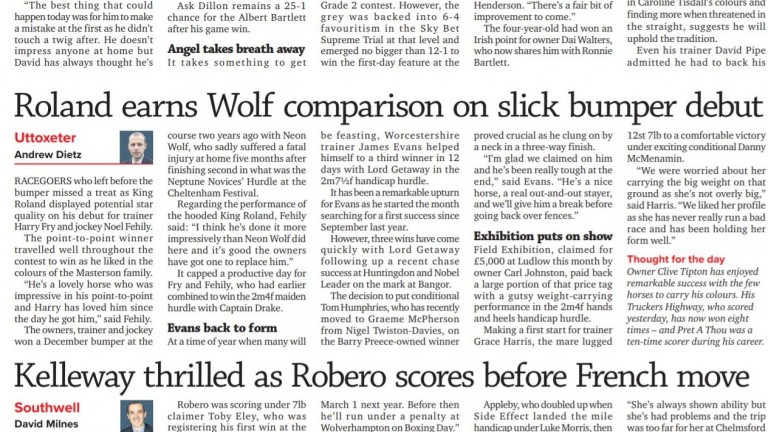 "King Roland had a great temperament from the start and was a very laid-back character," says McAlinney.

"He was so chilled at home but certainly showed himself off once he got to the sales. He was straightforward to prep, as have all of Kiltiernan Robin's stock.

"Nicki Brolly, a former undergraduate, led him up at the sales. Nicki has since gone on to work at Woodbine racetrack in Canada and has led up at races such as the Queen's Plate at Woodbine, the Breeders' Cup, and at Keeneland and Belmont Park."

As well as Cafre Enniskillen, King Roland also flies the flag for the British point-to-point scene, having won an open maiden on debut at Larkhill for his previous handler Sophie Lacey, whose husband Tom purchased him for €40,000 at the Tattersalls Ireland Derby Sale.

Kiltiernan Robin's other progeny also appear worth keeping an eye on, with her four-year-old Presenting gelding Make Me A Believer in the care of master point-to-point handler Colin Bowe.

She also has a three-year-old Flemensfirth filly, a two-year-old Walk In The Park colt and a yearling Shantou colt, and is expected to foal down to Getaway in April.

"The bachelor of science students recently visited a number of studs where they viewed a number of potential choices for the college's mares," explains McAlinney.

"They then have discussions around pedigree, performance, sales records and so on before recommending preferred coverings to management.

"The college also maintains strong links with the equine industry and seeks guidance from a range of professionals who help us source mares.

"Cafre Enniskillen is a strong advocate for learning by doing, which really enhances the employability of our students. They progress to work for many top equine businesses within the industry. One of the reasons for the success of our students is that they gain excellent hands-on experience working with a range of horses and foals in the equine units at our Enniskillen campus."

The broodmare band at Cafre Enniskillen comprises ten mares - of both the thoroughbred and sport horse variety - as well as their youngstock. The breeding unit is managed by students with guidance from staff and industry supporters.

McAlinney says: "Students are taught a range of management and husbandry skills across the racing, breeding and equitation disciplines and we also have a farrier school. They also compete at a number of point-to-point meetings, where we run our own horses ridden by students.

"As Cafre Enniskillen is an integral part of the Department of Agriculture, Environment and Rural Affairs in Northern Ireland, our breeding unit is funded through the government to improve the knowledge and skills of people in our equine industry.

"Staff and students recently travelled to the US to develop links with the University of Kentucky and top businesses including Coolmore and Godolphin."

The college also consigns on behalf of a number of outside breeders - such as smart handicapper Couer Joyeux - which McAlinney says enhances the student experience and opens up opportunities for work experience and employment.

"We have alumni working in some of the best equine organisations in the world including Coolmore and Godolphin. Among our past students is James Harron, now a leading bloodstock agent in Australia.

"We provide a wide range of equine education courses from diplomas to honours degrees, with over 90 per cent of our graduates employed or undertaking further studies."

Five things we learned from the Cheltenham Festival

FIRST PUBLISHED 6:01PM, MAR 18 2019
Staff and students have been really excited to follow the career of King Roland to date