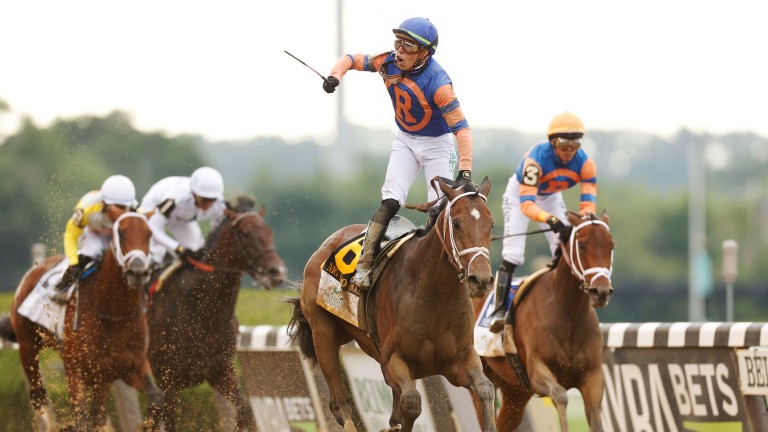 Mo Donegal: winner of the Belmont Stakes has been retired
Sarah Stier (Getty Images)
1 of 1
By Eric Mitchell of Bloodhorse UPDATED 10:56AM, SEP 17 2022

Donegal Racing's and Repole Stable's Mo Donegal, the Grade 1-winning millionaire by Uncle Mo who captured the Belmont Stakes in June, has been retired from racing and will stand at Spendthrift Farm next year. His fee will be $20,000.

"It's always exciting when you can acquire a stallion prospect of the caliber of Mo Donegal, and we are thankful to Jerry Crawford, Mike Repole, and the Donegal Racing partners for the opportunity," said Ned Toffey, Spendthrift's general manager.

"It's not often you can offer breeders a Classic winner by an emerging sire of sires, which Uncle Mo appears to be. On top of that, Mo Donegal is very good looking, comes from a brilliant and active family, was a two-year-old Graded stakes winner and defeated some of the best from a pretty good crop of three-year-olds this year. We expect him to be extremely popular, and we invite breeders to come out and see him."

Mo Donegal exited his victory in the final leg of the Triple Crown with some bone bruising, and it was ultimately determined that the three-time Graded winner would be retired.

"The Donegal Racing partners and I could not be more proud of Mo Donegal and the special places he took us the last two seasons," said Crawford, CEO of Donegal Racing. "The timing of the bone bruising was unfortunate and not going to allow us to make any of our target races for the remainder of the year. We felt the best decision was to retire him, and we are excited that he'll get a wonderful opportunity to make a great stallion at a place like Spendthrift."

Repole, who acquired an ownership stake in the son of his former stable star Uncle Mo earlier this year, said: "I was following Mo Donegal as a two-year-old last year at Saratoga, because Todd [Pletcher] trained and liked him and, obviously, he's a son of Uncle Mo. I was very impressed, and I got to watch him win the Remsen.

"He was a horse that had already got the mile-and-an-eighth as a two-year-old, and I knew he would get better. He went on to win the Wood, which was amazing, and then he gave me the biggest thrill of my life, winning the Belmont Stakes. Mo Donegal is a beautiful son of Uncle Mo, and he beat some of the best - Zandon, my filly Nest, Early Voting. Just very impressive all around."

Mo Donegal broke his maiden last year at Belmont at before winning his first stakes in the Remsen Stakes at Aqueduct in his next start, defeating subsequent Grade 1 winner Zandon.

This year at three, he won the Wood Memorial Stakes over eventual Preakness Stakes winner Early Voting and Graded winner Skippylongstocking , running 1 1/8 miles in 1:47.96 - the fastest time recorded in the storied Kentucky Derby prep race since Bellamy Road's 1:47.16 in 2005.

Following a troubled fifth from the one-hole in the Kentucky Derby, Mo Donegal returned to New York to decisively win the Belmont by three lengths over three-time Grade 1 winner Nest and three other Graded winners, including Kentucky Derby winner Rich Strike.

"The Classic winners that come through our program will always be special to me, and Mo Donegal showed in his Belmont Stakes win what we have always thought of him," said Pletcher. "We went into the [Kentucky] Derby this year with a lot of confidence, but the one-hole was just too much to overcome.

"Obviously, having trained Uncle Mo, it was nice for us to be able to campaign one of his best sons. Mo Donegal showed immense talent from the first time we breezed him at two, and he's always been a very classy, good-minded, good looking colt. I'd have to imagine breeders will love him."

Mo Donegal retires with earnings of $1,511,800, joining Darley's Nyquist as Uncle Mo's millionaire Classic winners at stud. He is out of the Pulpit mare Callingmissbrown, a daughter of Grade 1 winner and multiple stakes producer Island Sand.

The immediate family also produced Queen's Plate winner Niigon, who was the second-leading sire in Canada in 2012 and among the top ten for multiple years.

Callingmissbrown has produced three winners from as many to race, including Mo Donegal's half sister Prank (Into Mischief) who won on debut July at Saratoga by nine and three-quarter lengths for Pletcher and StarLadies Racing, LNJ Foxwoods, and Gainesway Stable.

FIRST PUBLISHED 9:20AM, SEP 17 2022
He's always been a very classy, good-minded, good looking colt. I'd have to imagine breeders will love him