Bargain buy from Shadwell proving his worth with Coral Charge victory

Showcasing gelding Raasel was bought by Jason Kelly for 10,000gns 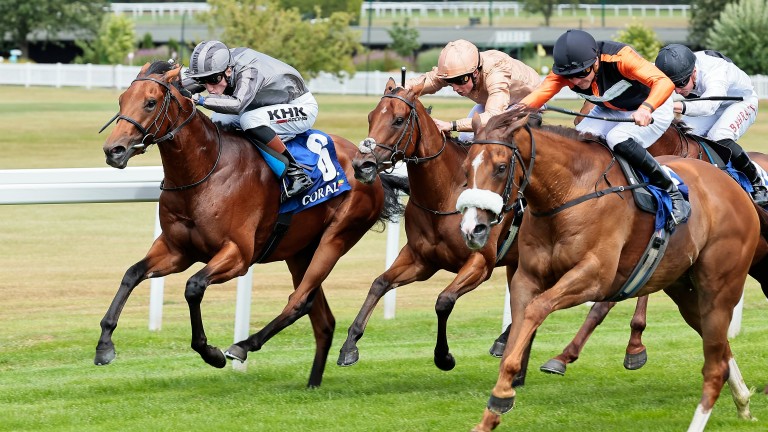 Raasel continued his sire Showcasing's red-hot run of form with a brave success in Sandown's Coral Charge on Saturday, following on from four other black type winners over the last three weeks.

The up-and-coming winner was bred by Bearstone Stud, producer of the elite sprinter Glass Slippers, and was picked up by Shadwell for 80,000gns as a yearling from Tattersalls Book 2.

He won on debut at two for Marcus Tregoning in the late Hamdan Al Maktoum colours before a third to Brad The Brief on his second start at Newmarket in 2019.

He then sold to Jason Kelly Bloodstock for just 10,000gns from the 2020 Tattersalls August Horses in Training Sale to go into training with Mick Appleby for The Horse Watchers, a team including television pundit brothers Chris and Martin Dixon.

The gelding has now won eight of his last ten starts, including a defeat of last season's first-past-the-post Commonwealth Cup runner Dragon Symbol in the Achilles Stakes at Haydock in May, and both his starts in black type company for his new connections.

Becomes his sire's Fourth new Group winner in three weeks with an impressive turn of foot in the Group 3 Coral Charge at Sandown.

Appleby said of his charge: "We picked him up relatively cheap from the sales. He had got a few issues and we had to iron them out but he has kept on progressing since."

Whitsbury Manor Stud sire Showcasing has been in blazing form of late with Belbek landing the Prix du Bois last month and Dramatised impressing in the Queen Mary at Royal Ascot. They were followed by Sense Of Duty in the Chipchase Stakes at Newcastle last weekend and juvenile Wodao in the Tipperary Stakes on Wednesday.

Raasel is the fourth foal out of the Dubawi mare Dubai Affair, a winner on the all-weather for Hughie Morrison and a half-sister to Bosra Sham Fillies' Stakes scorer Queen's Grace (by Bahamian Bounty).

The pair are in turn out of the late Bridget Swire's Palace Affair, a stakes-winning daughter of Pursuit Of Love and a half-sister to July Cup scorer Sakhee's Secret, Listed winner Palace Moon and Zacchera, the dam of Graded winners Santa Monica and Grand Promenade.

FIRST PUBLISHED 5:07PM, JUL 2 2022
He had got a few issues and we had to iron them out but he has kept on progressing since