Frankel colt added to his Derby victory in imperious fashion 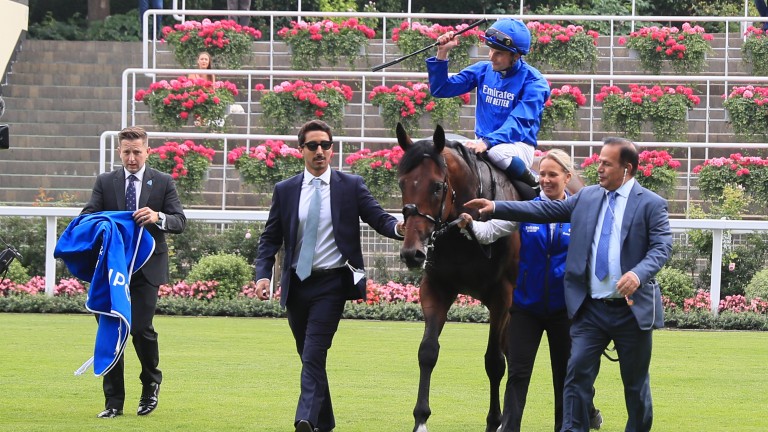 There could have been no more eligible a stallion prospect to come out of the King George VI and Queen Elizabeth Qipco Stakes than Adayar - and what hoofprints he was following after his captivating performance at Ascot.

The last Derby winner to follow up in the midsummer showpiece had come 20 years earlier, when Galileo thwarted Fantastic Light in the first of their duels of the ages.

Adayar is a grandson of the record-breaking sire, who died a fortnight ago and could claim some paternal influence over four of the five runners in Saturday's race.

His father, Frankel, was not only Galileo's greatest product in his extraordinary career but is beginning to look his most likely successor at the top of the tree, his individual tally of Group or Grade 1 winners soaring to 17 this summer through the further heroics of Irish Derby and Grand Prix de Paris hero Hurricane Lane and the Falmouth scorer Snow Lantern.

With his mark surely set to rise from his official 121 with this length and three-quarters defeat of Mishriff, Adayar is second best on the ratings among Frankel's progeny behind Cracksman.

Although he has won only over a mile and a half this year and did not strike above maiden level at two, he is quickly looking like the most complete individual to have appeared among six crops to have hit the track during Frankel's tenure at Banstead Manor.

While Fantastic Light's own stud career for Darley and Godolphin was unremarkable - he was transferred to Japan after beginning at Dalham Hall - Adayar was also burnishing the reputation of the operation's totem, Dubawi, as he is a Godolphin homebred out of Dubawi's Irish 1,000 Guineas runner-up Anna Salai.

Godolphin and Charlie Appleby's other black-type success on the card, in the Listed Pat Eddery Stakes, was of the more pre-prepared variety.

New Science, who won in the style of a juvenile with plenty more to come, was a first two-year-old stakes scorer of 2021 for Lope De Vega, who had a banner season with his youngsters, such as Aunt Pearl, during the last campaign.

Bred by the Bianco family out of Group-placed Galileo mare Alta Lilea, he was bought for €260,000 by Godolphin from Haras d'Etreham at the Arqana Select Sale.

It was not all about elite prices on the card. The Group 3 Princess Margaret Keeneland Stakes saw Zain Claudette (No Nay Never) hold off Desert Dreamer by a whisker, with both having cost around £20,000 as yearlings.

Zain Claudette's dam Claudette is a permanent boarder at Coolmore's Castlehyde Stud, and her daughter was bred by Andriy Milovanov and sold by Castlehyde as a yearling.

FIRST PUBLISHED 4:51PM, JUL 24 2021
He's quickly looking the most complete individual to have appeared among six crops to have hit the track during Frankel's tenure at Banstead Manor