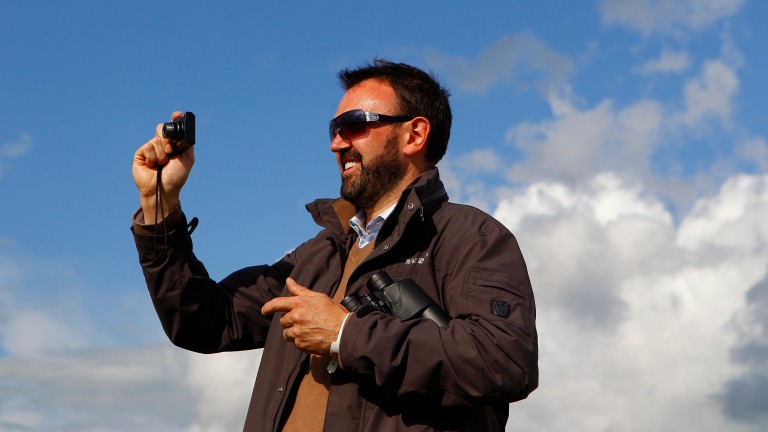 For a horse who appears to be quite out of the ordinary, it is only fitting that Samcro is the work of a man who is not your average jumps breeder.

Douglas Taylor had hitherto been best known for pulling off a gamble straight out of the pages of a Dick Francis thriller. In the infamous plot of June 2010, the CEO of outsourcing firm MCR passed 200 assistants – many of them foreign nationals not fluent in English to maintain secrecy – instructions to each place a bet on his horse D Four Dave to win at Kilbeggan, along with the €200 stake and a watch with the alarm set for five minutes before the race so the money would go down simultaneously to protect the price.

D Four Dave, who had been available at 14-1 on the morning of the race, duly trotted up by seven lengths at 5-1, sealing a coup that cost bookmakers a reported six-figure sum.

That is not the only tale that illustrates how Taylor does not conform to expectations. He has also managed to breed two Cheltenham Festival winners from the only two broodmares he has ever owned, and is the proprietor of a popular young stallion in Jet Away who he is supporting by granting him access to Samcro's dam Dun Dun.

Getting the D Four Dave escapade out of the way before the serious business of breeding, Taylor reflects: “I made the mistake of telling a journalist at the time that I was getting married and it would pay for the wedding. I ended up being tormented by all the tabloids – journalists were ringing from Australia. The gamble was really for the fun of it, not the money. I'll know not to open my mouth next time.”

Now Taylor is back in the news for his brilliance with bloodstock rather than bookie-bashing. He bred Samcro, hailed as the most exciting young jumper of recent times and the smooth winner of the Ballymore Novices' Hurdle at Cheltenham last month to remain unbeaten, out of the unraced Saddlers' Hall mare Dun Dun. The dam is a sister to the classy pair Featherbed Lane and Master Of The Hall and half-sister to last month's Leinster National winner Pairofbrowneyes. 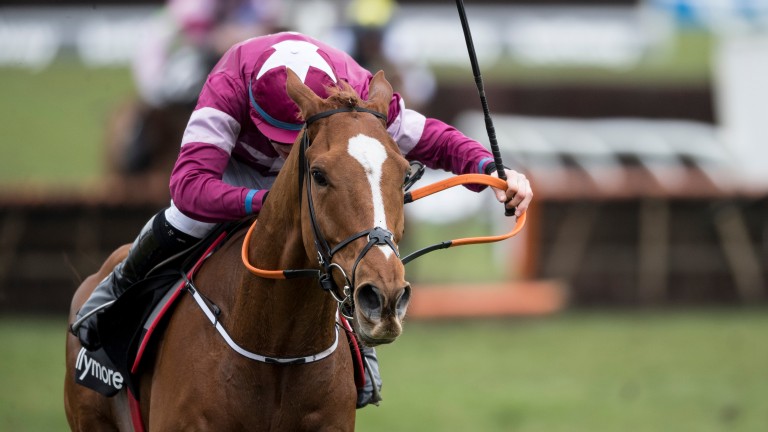 Seven years earlier at the Festival, homebred Final Approach – by Pivotal out of the well-related, winning Kahyasi mare College Fund Girl – carried Taylor's silks to pip Get Me Out Of Here at the post in the County Hurdle.

The dam was bought to be an elite Flat producer for 320,000gns in 2014. Although Final Approach didn't stick to the script, she has otherwise fulfilled her destiny by producing the useful sprinter Mehdi and German Group 2 scorer Parvaneh, sold by Taylor as a two-year-old for €175,000 and resold by her next owners as a breeding prospect for €1 million.

College Fund Girl has been covered by Churchill in recent weeks having failed to get into foal to Frankel and Kingman – both to southern hemisphere time – in the last two seasons.

“I always have one eye on Australia,” Taylor says. “The temptation is strong because the prize-money down there is so huge. You only need one good horse and it pays for all the bad ones. Up here having one good horse makes no difference. She has a yearling colt by Jet Away foaled in Ireland who I've sent down to New Zealand.”

Remembering her purchase, Taylor continues: “I only bought her because I'd bought a bit of land and it's handy to have a few mares to get planning permission. So I sent a friend of mine off to buy a mare and that's what he came back with.

“She was in foal to Flemensfirth, but the resultant colt was very small, and we sent her to Golan next, but the foal was no good, so I ended up giving away the first two foals out of her for free.

“I was starting to question why I'd bought Dun Dun, but the pedigree kept improving all the time. Master Of The Hall came out, then Featherbed Lane and Pairofbrowneyes; none of those were on the page when we bought Dun Dun.

“Then Samcro was born, and he just looked so different to all the previous foals. He saved me from moving on the mare.”

Samcro is by Germany, sire of the great hurdler Faugheen and fellow Cheltenham Festival winners Captain Cee Bee and Tiger Cry, but suffering declining fertility at Woodlands Stud in County Galway when Dun Dun visited him in 2011.

“I hunt with the Galway Blazers and Germany was at the local stud so the mare just went up in the horse box,” Taylor says. “She can be hard to cover and Germany was infertile – he only covered five mares that year – so it was a mad decision but it worked out well.”

Samcro was broken at two by Taylor's sister Millie, who runs his yard in County Meath, and pre-trained by Vincent Ward – who reported the horse was “killing everything, even seasoned handicappers” in his work – before he was sent to the store sales at three with the intention more of qualifying him for lucrative bumpers than finding a buyer.

'My daughter hasn't forgiven me'

Taylor sent Samcro to Colin Bowe at the end of his three-year-old season and the point-to-point maestro prepared him to cosily beat the then Gordon Elliott-trained Elegant Escape between the flags at Monksgrange in the following spring.

“Everybody in the country was ringing me wanting the horse,” Taylor remembers. “I was only slightly interested in selling him, but the sales companies were offering free flights and all sorts to let them have him.”

The horse's next public appearance was at the inaugural Goffs UK Aintree Sale, where he was bought by Elliott for £335,000 on behalf of Michael O'Leary. The rest, as they say, is history.

“If it was today, would I let him go again? No,” says Taylor. “He was a family pet, known as Rodney, and my daughter still hasn't forgiven me for selling him.” 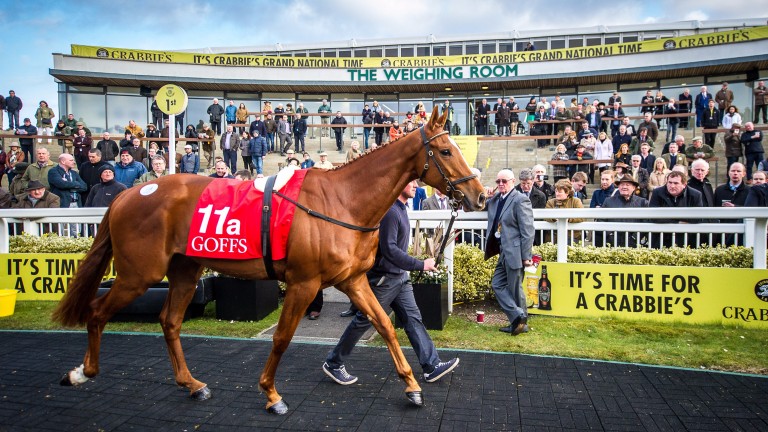 But at least Taylor has Samcro's two-year-old half-sister by Jet Away, while Dun Dun returned to the stallion this year.

Explaining why he is standing – and standing squarely behind – the sire, a son of Cape Cross out of a sister to the late blue hen Hasili who he bought in training from Juddmonte for 200,000gns, he says: “I bought him to run in the Cups in Australia. He showed really good form down there and was fourth in the Caulfield Cup but got a terrible ride from Damien Oliver – he was in such good form he took a hold and ran away with the jockey.

“He was then sixth in the Mackinnon, but it turned out he'd suffered a slight tendon injury at Caulfield. He could have done better in Australia – I think he could have been in the mix for the Melbourne Cup but for a bit of bad luck.

“He has a superb Juddmonte pedigree and just looks like a proper stallion. In his racing days he was always boss of the stables. Every horse, male or female it didn't matter, had to run for cover when Jet Away was coming. You'd hear a cry of 'Jet Away, Jet Away' from the lads and the place would just clear.

“He's a very fertile stallion, that's what he's got a name for. He's been given some very difficult mares to cover and not only does he put them in foal but he puts twins into most of them."

Jet Away has certainly been popular with breeders in his first three years at Arctic Tack Stud in County Wexford, having covered 180 mares in his first season, 179 in his second and 136 in his third in 2017.

No doubt about it, then: Taylor is not the only breeder convinced by Jet Away's qualities. But would the unorthodox breeder join the chorus of voices calling Samcro the second coming?

The answer is a firm yes. “He could go anywhere he wants,” he says. “He could win the Gold Cup or the Champion Hurdle, but Mr O'Leary is a Gold Cup man and he'll go for that. He's a horse that minds himself. They realise how good he is.

“He'll win a number of Gold Cups. No doubt.”

FIRST PUBLISHED 9:19PM, APR 26 2018
Then Samcro was born, and he just looked so different to all the previous foals. He saved me from moving on the mare