Postponed to join his sire Dubawi on the Dalham Hall roster 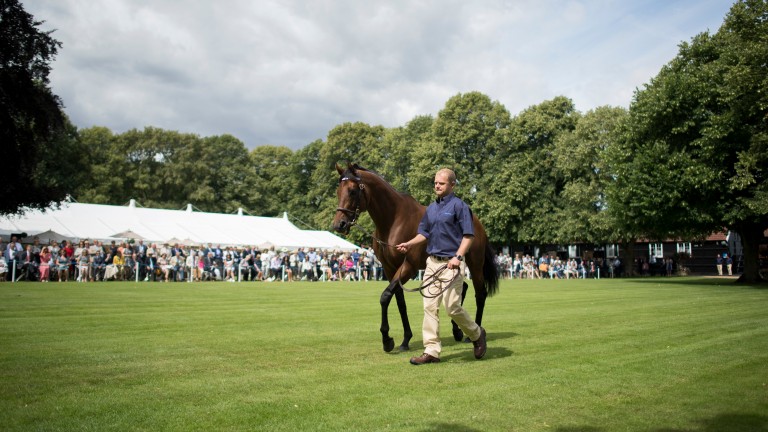 Darley patrons were given a preview of a forthcoming attraction at the stud's stallion parade in July
Edward Whitaker
1 of 1
By Zoe Vicarage 2:36PM, AUG 22 2017

Dubawi is to be joined by another of his sons at Dalham Hall Stud with four-time Group 1 hero Postponed to take up duties there for the 2018 breeding season. His opening fee has been set at £20,000.

The announcement hardly comes as a surprise, Postponed having made a conspicuous guest appearance at the Darley stallion parade in July.

The six-year-old, his sire's second highest-rated performer on Racing Post Ratings at 126, began his career in 2013 under the care of Luca Cumani. A Yarmouth maiden winner as a juvenile, he won the Listed Glasgow Stakes and Group 2 Great Voltigeur Stakes at three before really beginning to thrive in his third campaign. He made his Group 1 breakthrough when beating Eagle Top by a nose in the King George VI and Queen Elizabeth Stakes, and also landed the Group 2 Prix Foy.

That proved to be his final start for Cumani, with Sheikh Mohammed Obaid Al Maktoum moving his horses to Roger Varian's yard. Postponed made a winning start for his new trainer in the Group 2 Dubai City Of Gold Stakes, and that proved the springboard for three victories on the bounce at the highest level: in the Dubai Sheema Classic, Coronation Cup and Juddmonte International.

But he was a beaten favourite in all three starts since, and in May Varian announced that the horse was to be retired after suffering a stress fracture.

St Albans Bloodstock bred Postponed out of the winning Dubai Destination mare Ever Rigg, whose daughter by Nathaniel, God Given, has kept the pedigree active this season with victories in the Listed Aphrodite Stakes and the Group 3 Prix Minerve.

Ever Rigg is in turn out of champion juvenile filly Bianca Nera and her further family includes Falmouth Stakes heroine Simply Perfect.

Offered as a yearling at Book 1 of the Tattersalls Sale, Postponed was bought by John Warren and Charlie Gordon-Watson for 360,000gns.

Dubawi already has a son standing alongside in Poet's Voice, who stood the latest breeding season at a fee of £8,000 and has so far supplied the likes of Poet's World, Poetic Dream and Poet's Vanity.

Sam Bullard, director of Darley stallions, said: "Postponed was a real hero of horse. He proved himself typical of his great sire Dubawi as an extremely talented and durable performer, defeating no fewer than 27 Group 1 winners during his career.

"With his granddam a champion juvenile, Postponed's pedigree, race record and good looks give him great commercial appeal and he was very well received by breeders when shown at our recent stallion parade. We are delighted that he will be standing on the Darley roster."

FIRST PUBLISHED 2:36PM, AUG 22 2017
He proved himself typical of his great sire Dubawi as an extremely talented and durable performer