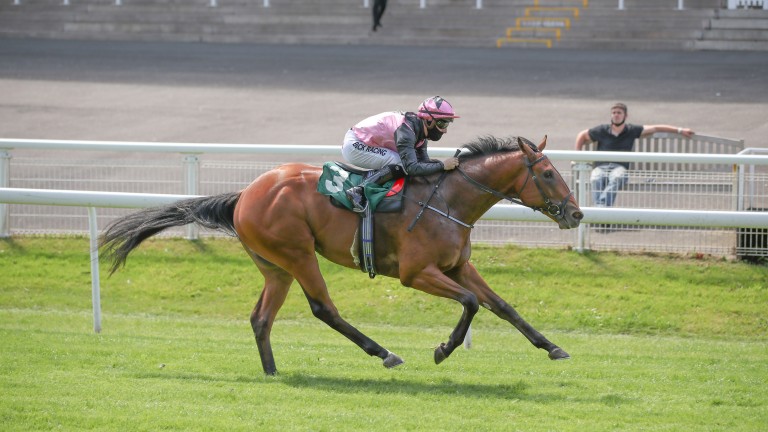 Not long after Buratino supplied his first winner on Wednesday, his Kildangan Stud colleague and fellow freshman sire The Last Lion also got off the mark.

The Last Lion achieved the feat in some style too, as son Kraken Power blew away his rivals to score by three and a half lengths in the British Stallion Studs EBF Maiden Stakes over six furlongs at Hamilton.

Kraken Power, trained by Iain Jardine for James and Scott Fyffe, was building on the promise of his debut at Pontefract earlier in the month, when he finished a head second to Candescence and seven and a half lengths clear of the third.

“We always thought he was a very nice horse,” Jardine told Racing TV after the contest. “Things didn't go right for him at Pontefract, he was slightly slowly away, got stuck behind horses and had to swing right turning in but he drew a long way clear of the third that day.

“He's got the pace to win over six furlongs but I think he'll get seven with no problem in time – he finished with plenty in the tank today.

“He was bought from the Premier Yearling Sale and is in the sales race for that. I'll speak to the owners, but I think that will be the plan.”

Kraken Power was signed for by Jardine with Compas Equine for £28,000 at the Goffs UK Premier Yearling Sale.

He was consigned by Tally-Ho Stud as agent, with Andray and Ihor Bloodstock having earlier purchased him for €39,000 at the Goffs November Foal Sale.

Bred by Cloneymore Farms and James Murtagh, Kraken Power is the fourth foal and second winner for the Royal Applause mare Throne, a half-sister to Nunthorpe hero and smart sire Kyllachy.

Throne has a yearling colt by another Kildangan Stud sire, Profitable, and visited the same sire last year.

The Last Lion, a son of Choisir and Cheveley Park Stakes third Mala Mala, was given a busy two-year-old campaign by trainer Mark Johnston but maintained his form well – winning the Brocklesby Stakes on debut in April and taking the Middle Park Stakes in September on the last of his ten starts that season.

In between, he also won the Dragon Stakes and Sirenia Stakes, and finished second in the Norfolk, Molecomb and Flying Childers Stakes, and third in the Gimcrack.

The Last Lion was sold to Godolphin at the end of his juvenile season and was immediately retired to Kildangan Stud.

He suffered from subfertility in his first year at Sheikh Mohammed's headquarters in County Kildare and consequently has a first crop of just 45 two-year-olds to represent him.