International BACK IN BUSINESS 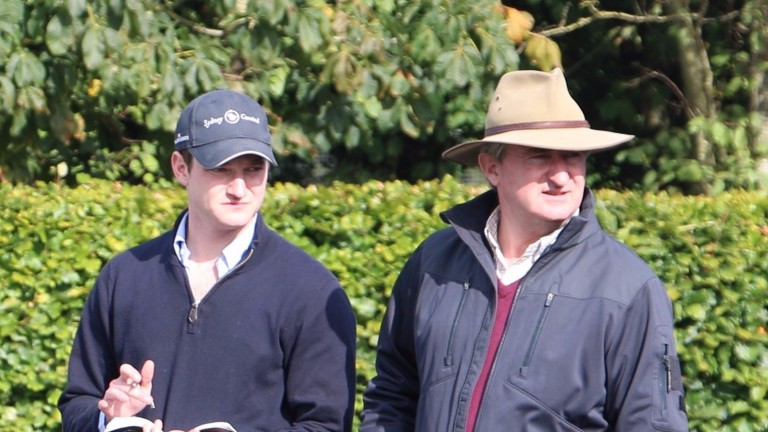 John Ferguson (right) and son James during inspections at the Goffs Orby Sale on Monday
Goffs
1 of 1
By James Thomas UPDATED 8:02AM, SEP 26 2017

One year on from John Ferguson being centre stage of a thrilling piece of theatre at the Goffs Orby Yearling Sale, when he secured a Dubawi colt out of Beauty Parlour – the subsequent Newmarket maiden winner Being There – for €1.4 million on behalf of Godolphin, he was back in Kill on Monday inspecting lots, but in very different circumstances.

In the intervening period Ferguson found himself in a public spat with Godolphin trainer Saeed Bin Suroor that led to his resignation as the operation's chief executive; the man who had signed for countless top-dollar auction horses on behalf of Sheikh Mohammed.

After a brief spell on the sidelines, Ferguson is now back in action, operating as an agent under his own name but with a new team.

"It's something I'd been mulling over. I took a month or so off having finished just before Royal Ascot. Now the batteries are recharged and I'm ready to roll,” he said with a subtle but distinct tone of conviction that suggested he has lost none of his desire to unearth the next rising star.

Ferguson may no longer have the backing of the ruler of Dubai, but having amassed an enviable roll of honour of purchases during the 25 years he spent securing stock for Godolphin - with admittedly unparalleled financial firepower - his eye for a horse might be expected to be in demand.

"I'm so lucky that I've been involved in Flat racing and jumping, and have been lucky enough to do a lot of work in Australia, Japan, Europe and America,” he said. “Now I'm in a position that, with that experience, hopefully we can get a lot of deals done.”

Ferguson has joined the fray of independent bloodstock agents again in partnership with Sam Haggas, son of leading trainer William.

"I've known Sam since he was a child and he's always impressed me; I'm delighted to be working with him," he said of the 25-year-old, who has spent spells on both sides of the industry with leading Australian trainer Gai Waterhouse and the bookmaker Paddy Power.

With parties from every corner of the globe at Goffs it looks entirely possible that the strength of trade in evidence at the likes of Keeneland and Doncaster will again be seen this week, though Ferguson was keen to dip his toe into the market nevertheless.

"It's good solid trade, and so it should be,” he said. “Racing in Britain is in better shape than it's been for many many years; everyone's worked really hard on that, and we're so lucky to attract owners from all around the globe.

“I've seen some nice horses here and Goffs always produce plenty of nice winners, so you have to take it seriously.”

Given Ferguson enjoyed a fruitful, albeit brief, period as a National Hunt trainer, there had been some speculation that he would again take charge of a string of jumpers. However, speaking while casting his eye over Flat bluebloods at Goffs, it appeared nothing was further from his mind.

"I loved training the jumpers and that was a great experience," he said. "But I'm delighted to be back as John Ferguson Bloodstock. It's a company I had for many years before I worked for Sheikh Mohammed and Godolphin, so it's the natural thing to do. At the end of the day, this is just what I do and it's great to be here."

That said, it is not ruled out that John Ferguson Bloodstock could make its presence felt in the National Hunt market.

"Jumping has always been my love, so we're happy to help wherever clients require us," he said on the prospect of extending his buying activities into the store and horses in training sales.

"I've always adored this industry and love being a part of it," he added. "I had a wonderful, wonderful 25 years working with Sheikh Mohammed and the Godolphin team, and now is a wonderful time to move forward and go on to other things."

This year's Orby Sale – which could possibly mark the first public purchases made by Ferguson in the new stage of his career – takes place over two days from 10am on Tuesday, with 468 yearlings set to take their turn in the ring.

Ferguson's departure from Godolphin the only move - and the right one