James Thomas reports from a buoyant day one in Doncaster 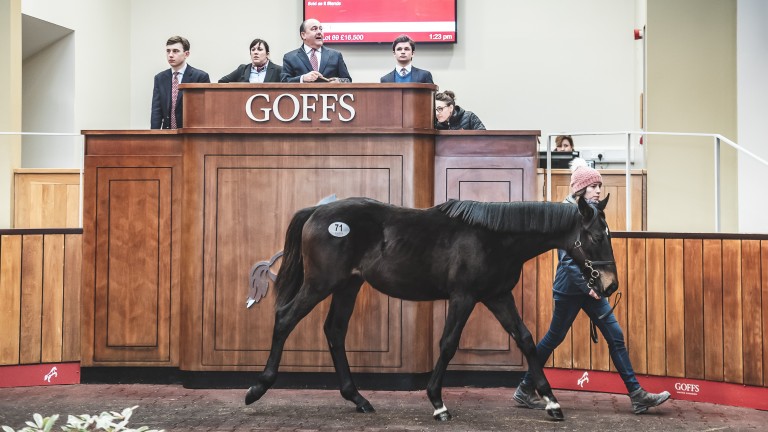 Pinhookers were to the fore as the curtain came up on another year of auction ring action in Doncaster, as day one of the Goffs UK January Sale was topped by a £55,000 son of Blue Bresil.

Consigned by Juliet Minton's Mill House Stud, the session-topper was signed for by BAA Bloodstock's Brian Cahill, who intimated that his purchase had been bought with the premier store sales in mind.

"The plan is he'll come back to the sales as a store in two years' time," said Cahill. "He has a great presence, a great walk and we thought he was the nicest foal here."

The February-born youngster is out of High Benefit, a two-time winner by Beneficial whose page traces back to the Parkhill family's celebrities Morley Street, Granville Again and City Island.

As well as the physical model and a strong back pedigree, Cahill explained that the colt's sire also had a big bearing on his determination to secure the well-related offering.

"We think Blue Bresil is a stallion going places, he's got plenty of horses to run this year, so he's clearly on the up," he said. "He'll be brought back to Ireland now before being prepared for the sales, we'll be hoping he'll go to something like the Derby or the Land Rover sales."

The colt is from the penultimate Yorton Farm-conceived crop of Blue Bresil, with the son of Smadoun having relocated to the Cashman family's Glenview Stud in Ireland for the 2020 breeding season, where he will stand for €8,000.

Having landed the session's highest-priced offering, Cahill gave his assessment of the day's trade, saying: "There's some nice horses here and they're making plenty of money."

Minton, who runs the Shropshire farm with bloodstock agent husband David, was clearly delighted with the sale, and said: "He was bred by John Hales so we've had him for about six weeks and he's been a beautiful foal from the day he arrived.

"He's got a wonderful temperament and a great step to him, you can't have enough horses like him, although they don't come along very often."

The second-top lot could also return to the store sales, though winning bidder Hamish Macauley indicated that no firm plans had been put in place for the Kapgarde colt, who brought a final bid of £43,000.

Offered by Goldford Stud having been bred by Richard Aston and Steven Hadley, the colt is a half-brother to the Listed-winning hurdler Fou Et Sage and Folle De Toi, dam of Grade 1-winning hurdler Feu Follet, who is also by Kapgarde.

"We thought he had the best pedigree in the sale," said Macauley, who was acting on behalf of an undisclosed client.

"He might go racing or he might come back to the sales as a store, that's still undecided. But he was our pick of the foals here today and the guy I've bought him for was delighted to get him at that price."

Kapgarde, who is standing the upcoming covering season at Haras de la Hetraie at a career-high fee of €15,000, has enjoyed a fine run of form of late, having supplied Grade 1-winning talents such as Clan Des Obeaux and A Plus Tard.

"Kapgarde is one of the best stallions around, he stands for €15,000 now and we like him a lot," added Macauley. "He keeps coming up with the goods time and time again and hopefully this colt will be another good one."

The third-top lot, a Kayf Tara colt knocked down at £40,000, also seems destined to return to the sales, having gone the way of Richard Rohan, the man who pinhooked reigning Stayers' Hurdle hero Paisley Park.

The majority of the catalogue was comprised of National Hunt youngstock, with 82 short yearlings selling for a clearance rate of 70 per cent. Those lots brought turnover of £1,029,900 - a 25 per cent year-on-year rise; an average of £12,560 - the second-highest National Hunt foal average recorded at the January Sale; and a median of £9,000 - up 20 per cent.

At the close of trade, the recently appointed Goffs UK managing director Tim Kent said: "We are delighted with the level of trade shown throughout the day today. We had very positive feedback following the publication of the catalogue and a lot of vendors reported that they were far busier yesterday than at the same stage last year.

"This was complemented with more buyers arriving this morning which has resulted in a buoyant trade with increases across the board and a healthy clearance rate of 70 per cent.

"We would like to thank the National Hunt breeders for their continued support of the UK's only National Hunt foal sale and we look forward to offering a day of horses-in-training on Wednesday. This features some outstanding young form horses which have also generated a significant amount of interest in recent weeks."

The Goffs UK January Sale continues on Wednesday, with a session dedicated to point-to-pointers and horses in training starting at 10am.

FIRST PUBLISHED 7:13PM, JAN 21 2020
We think Blue Bresil is a stallion going places, he's got plenty of horses to run this year, so he's clearly on the up

Kodiac colt and Churchill filly catch the eye in SGA Sale catalogue Select line-up of 48 youngsters chosen for second Yorton Sale Miss Amulet half-sister destined for Ascot Yearling Sale in Newmarket Heading down under? December-foaled Great House added to Online August Sale Sires on fire and up-and-coming agents among the hot takes from Goodwood Hunt is on for next Golden Horde or A'Ali as Goffs UK reveal Premier Sale lots