Emotions run high as Chantry brings the house down at Cheltenham 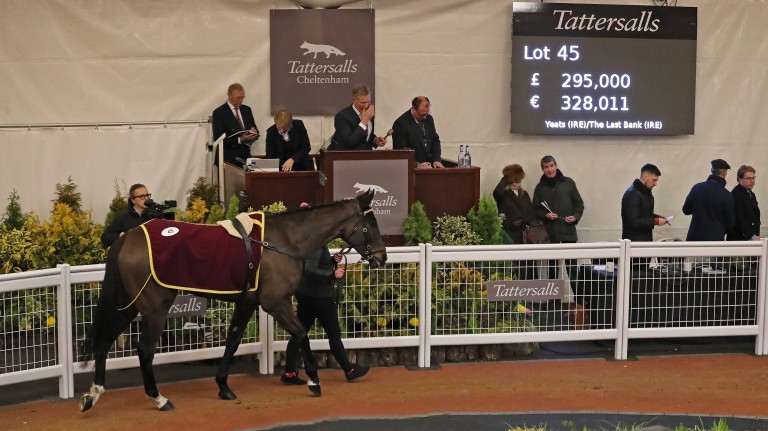 The 2018 European sales season came to a close at Prestbury Park on Friday as the Tattersalls Ireland ring at Cheltenham played host to a buoyant edition of the December Sale, at which 14 lots brought a six-figure sum.

The sale-topper, Chantry House, commanded a price of £295,000 when signed for by Michael Hyde, standing with JP McManus, and provided a fitting end to what had been an emotional tale for his previous connections.

Chantry House, who landed a Tattersalls Farm four-year-old maiden just five days before the sale, was trained for owner Eric Elliott by up-and-coming handler Cian Hughes, having been selected by Willie Codd, whose death in February rocked the Irish racing and point-to-point community.

"This is the last horse William [Codd] bought for me," explained Elliott, who was accompanied by his bloodstock agent son Alex. "When he died, Alexander rang me and told me this horse would take time but that he knew exactly the right man to train him.

"I'd never met Cian at this point but Alexander assured me he'd treat the horse like a Gold Cup winner. He's done exactly that and I really can't speak highly enough of him.

"I said to Cian that William had told me this was a serious horse, and the first thing Cian said to me was 'all owners say that', but it didn't take long before he rang me back to say 'you're right, he is a serious horse'." 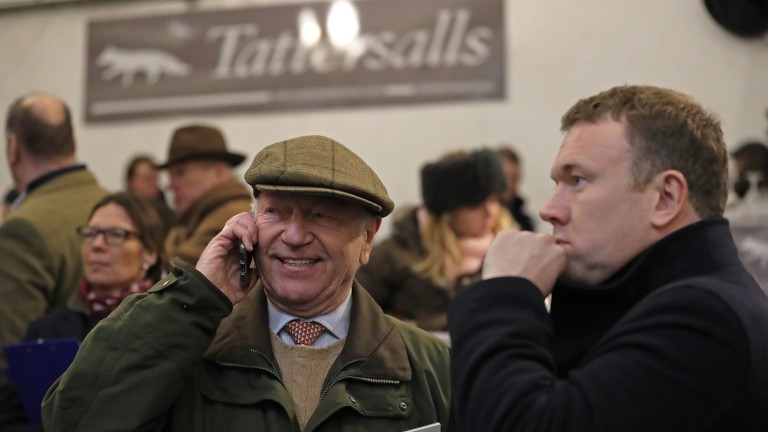 He ran a race full of promise on debut and was still in front when unseating three out.

The winner that day, Monkfish, fetched £235,000 from Harold Kirk and Willie Mullins at the Cheltenham May Sale, while the runner-up, Gameface, went the way of Kieran McManus for £145,000 at the Goffs UK Spring Sale.

"William told me he knew we had a decent horse because the first time that Jamie [Codd] got off him he didn't say anything, he just had the biggest smile on his face," added Elliott. "But he was so big I thought there's no way we'd be able to run him at four.

"He ran in April and looked like he was going really well when unseating. We were just waiting for the ground to turn soft to run him again and Sunday was his last chance."

Chantry House made amends for his earlier mishap on Sunday when dismissing 14 rivals to give his profile a timely boost ahead of Friday's sale.

"It's very emotional as William and I were good pals and I really miss him," added Elliott. "I'm sure he was looking down on us today."

Hughes said: "He's gone to a great owner so they'll look after him. It was a good price but he has the engine to match. He's one to look forward to."

Chantry House is out of the Phardante mare The Last Bank, making him a half-brother to the Grade 2-placed On The Shannon and the Grade 3 third Linnel.

The second-top lot went the way of Aiden Murphy after the agent secured Dundrum Wood with a bid of £270,000. The four-year-old son of Flemensfirth, offered by Camas Park Stud, landed a Rathcannon maiden on his second outing in November.

"He's just a lovely horse and has been bought for Barbara Hester for Olly [Murphy] to train," said the buyer. "This is the one she's been waiting for all day."

Dundrum Wood's debut third has been boosted since, with the winner that day, Fury Road, joining the all-conquering Gordon Elliott, while the runner-up, El Barra, topped the Cheltenham May Sale when bought by Harold Kirk and Willie Mullins for £280,000.

"It wasn't just his winning form that appealed, his debut third was very good too," added Olly Murphy. "Gordon Elliott trains the winner of that race and I know he loves him. He was impressive when he won too so I'm looking forward to training him. He'll have one run in a bumper before being turned away."

Tom Malone, bidding from his usual spot at the back of the auditorium, made his presence felt by securing three of the top ten lots, the priciest of which was the £175,000 Truckers Pass, who showed a good deal of promise when finishing second to Rookie Trainer at Ballindenisk earlier in the month.

"He's a lovely young horse who's still very raw," said Malone, who signed for the son of Kalanisi in conjunction with Paul Nicholls. "It was a bit of a farce of a race he ran in and it looked like he'd got up on the line.

"It was only his first day at school. There was nothing between him and the first horse, and if you watch the replay you'll see there should have only been one winner. He lost 20 lengths at the second last and got right back into contention and was only just beaten."

Despite having finished ahead of Truckers Pass, Rookie Trainer was sold to JD Moore for £70,000 earlier in the session

Malone and Nicholls also struck at £160,000 for Carry On The Magic, a son of Jeremy consigned by Jonathan Fogarty Racing. The €38,000 Tattersalls Ireland Derby Sale store finished runner-up behind Killer Clown on debut at Corbeagh House earlier in the month.

"He's a lovely young horse who travelled really well on debut but just got outstayed," said Malone. "He comes from a good camp and will go into training with Paul Nicholls."

The son of Getaway was signed for by Gerry Hogan at £135,000, having seen off Carry On The Magic by a length when winning his maiden. From the family of Adonis Juvenile Hurdle winner Bilboa, Killer Clown fetched €40,000 when bought by Bowe at last year's Goffs Land Rover Sale.

Malone's other top-ten lot was the £140,000 Minella Beat. The son of Beat Hollow, who landed a Lismore maiden back in March, will head into training with Jamie Snowden.

The early front-runner in the market was Shishkin, a well-regarded son of Sholokhov who went the way of Highflyer Bloodstock's Anthony Bromley after a £170,000 strike was delivered from the packed bidders' area.

"I've bought him to go into training with Nicky Henderson," said Bromley. "We adored him. He's got a nice pedigree and is by a proper stallion who has already sired a Gold Cup winner in Don Cossack."

The four-year-old showed a healthy profit on the €28,000 he cost Boyne Farm at last year's Tattersalls Ireland Derby Sale. He made two starts for handler Virginia Considine, who trains in County Meath, and made his second outing a winning one when scoring at Lingstown late last month.

"He came up quite early on at the Derby Sale, which worked out for us," said Considine when asked how she came by the six-figure youngster at such a bargain price. "We gave him a run in the spring but we weren't hard on him as he was a big, raw horse.

"We could've sold him after that but we loved him and threw him out in the field. He grew a couple of inches and really strengthened up, he was a much stronger horse after that. He's a pure athlete."

Shishkin is out of Labarynth, an Exit To Nowhere half-sister to Grade 1-winning hurdler Voler La Vedette.

The clearance rate stood at 68 per cent, with 43 of the 63 offered lots changing hands.

The biggest dent was left in the clearance rate by the breeze-up horses on offer, as 15 of the 22 to come under the hammer failed to find a buyer.

The seven breeze-up horses that did sell contributed £222,000 to turnover, and sold at an average of £31,714. The priciest of those lots was the £75,000 Milan gelding bought by Ryan Mahon and Anthony Honeyball.

FIRST PUBLISHED 10:19PM, DEC 14 2018
It's very emotional as me and William were really good pals and I really miss him. I'm sure he was looking down on us today

Kodiac colt and Churchill filly catch the eye in SGA Sale catalogue Select line-up of 48 youngsters chosen for second Yorton Sale Miss Amulet half-sister destined for Ascot Yearling Sale in Newmarket Heading down under? December-foaled Great House added to Online August Sale Sires on fire and up-and-coming agents among the hot takes from Goodwood Hunt is on for next Golden Horde or A'Ali as Goffs UK reveal Premier Sale lots