As unknown quantities headed through the ring for six-figure sums at Arqana, it looks quite likely that the buying team of David Spratt and Philip Burns have unearthed one of the finds of the season at a fraction of the price.

Yaxeni was bought under Burns’ Gaelic Bloodstock banner for just €8,000 at last year’s Goffs February mixed event and opened her account at the first attempt in a mile maiden at Cork on Saturday.

The juvenile is a pure Niarchos family product, being sired by the dual Group 1-winning stallion Maxios and out of Kithonia, a winning Sadler’s Wells mare whose dam Ratukidul is a half-sister to the outstanding Hernando and Johann Quatz.

Spratt, now a significant owner with Ger Lyons, has retained her to race alongside Sean Jones and Lyons’ wife Lynne, and his purchase could not have made a better start as she held off the Niarchos homebred Unknown Pleasures by half a length, with choicely bred representatives from the likes of Dermot Weld, Aidan O’Brien and Jim Bolger further back.

"We liked her, we felt we’d bought well at the time and a couple of people came up to us straight afterwards and offered us a profit," Burns explained.

"The sire maybe isn’t the most fashionable but on the dam’s side she has a decent enough page. She was a gorgeous filly. We like them with some size and she had a beautiful head.

"We decided just to let it roll as she was cheap and just took our time. She’s with such a good trainer, they liked her, and she doesn’t know how much she cost." 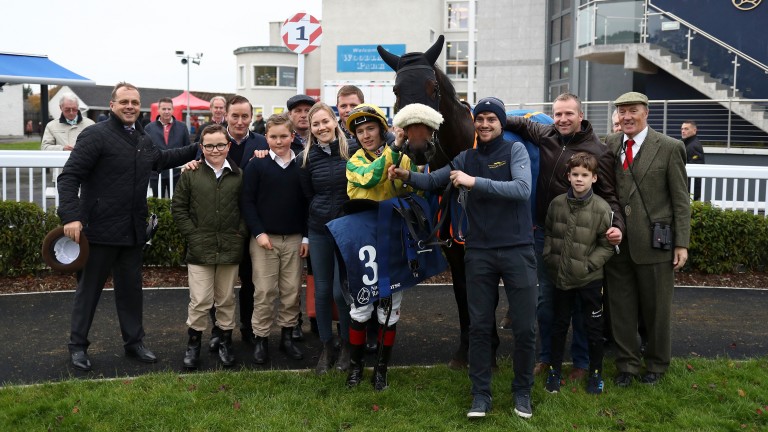 Mustajeer is another to have provided good days in the colours of David Spratt (second right)
Patrick McCann
In an understated way, Burns and Spratt have had an excellent season with horses which have not cost a king’s ransom. Mustajeer, picked up for 50,000gns as a horse in training from Tattersalls a couple of years ago, has easily recouped that as a Listed winner and multiple Group placer who could take another step towards the Melbourne Cup in Saturday’s Sky Bet Ebor after Australian Bloodstock bought a controlling interest.

Lemista, a Raven’s Pass filly who cost €16,000 as a foal, also showed distinct promise in a good maiden at Leopardstown on Thursday.

Burns revealed that his phone had been "kind of busy" since Yaxeni’s introduction, but prising her from current connections would require the right price.

"Just now, we’re more than happy," he said. "It’s our business and everyone involved with her is happy to let her go on to the next level.

"Ger has a fantastic bunch of two-year-olds, especially this year, and she’s holding her own in amongst them, so it’s happy days."