Five things we learned from the Cheltenham Festival this year

Rags-to-riches sire proves himself a legend

Objectivity goes out of the window when it comes to writing about Midnight Legend, I'm afraid. The sire of Cheltenham Gold Cup hero Sizing John was a favourite not just of mine, but of the many who enjoyed his unorthodox rise to the top of the stallion ranks. It is no stretch to say he enjoyed cult status among pedigree fans.

Midnight Legend defied convention throughout his life. Talented but just below top-class over middle distances on the Flat, he went on to win premier novice hurdles at Aintree and Punchestown. He was the type who nowadays would probably be sold to contest cup races in Australia, and who jumps trainers find so difficult to recruit from the Flat.

After one season covering mares he returned to training and finished third to Istabraq in the Aintree Hurdle. Back at Conkwell Grange Stud, he was in scant demand from breeders and was even taken hunting. He was eventually sold on for little money to David and Kathleen Holmes to stand at their Pitchall Farm in Warwickshire, with no great expectations.

Then something strange happened. Those first few, modestly bred runners by Midnight Legend started winning and the stallion was assembling an impressive strike-rate. It was clear he was upgrading his stock; the wonderfully game hurdling mare Sparky May was, for example, out of a mare who had been acquired to produce showjumpers. 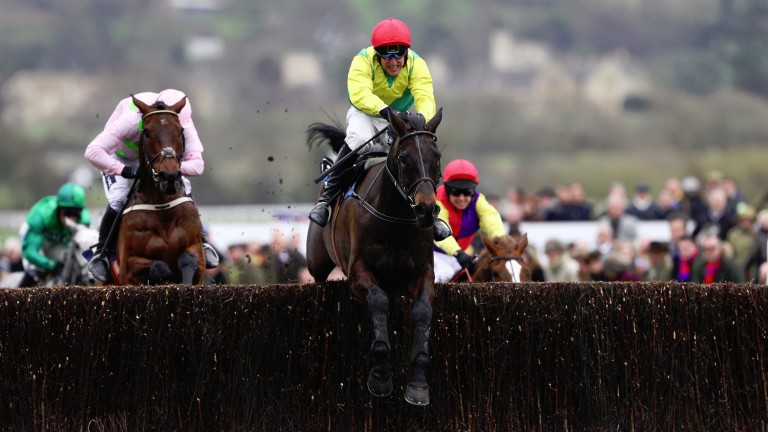 One of the earlier breeders on the Midnight Legend bandwagon was Bryan Mayoh and he has been rewarded by producing Sizing John – the first Grade 1 winner by the sire but likely not the last, with his better bred offspring coming through the ranks.

Midnight Legend was also represented at the festival this week by Trull House Stud Mares' Novices' Hurdle third Dusky Legend, illuminating another facet of the sire's brilliance – his record with female offspring, which will likely lead to him becoming a useful broodmare sire. One of his daughters has already produced Hennessy Gold Cup runner-up Carole's Destrier.

Montjeu has for some time been looking like the most likely successor to Sadler's Wells as an important source of jumps stallions and his son Authorized was the only sire to get two winners at Cheltenham this week, with Nichols Canyon and Tiger Roll. Other Montjeu sons Montmartre and Scorpion supplied the winners of the Supreme Novices' Hurdle and RSA Chase, Labaik and Might Bite.

Galileo is, unsurprisingly because there seems to be nothing he cannot do, also increasingly influential in the jumps sphere. Not only did he sire a winner himself, Supasundae in the Coral Cup, but his in-demand son Soldier Of Fortune put a winner, Flying Tiger, on the board along with a Grade 1 second, Mega Fortune in the Triumph Hurdle.

Less heralded for his exploits in jump racing has been Montjeu and Galileo's former Coolmore studmate and fellow son of Sadler's Wells, High Chaparral, but he is making headway in this department.

Altior, the smooth winner of the Racing Post Arkle this week, is one of two festival winners for High Chaparral along with Hawk High, triumphant in the Fred Winter three years ago. Landofhopeandglory, a creditable fifth in the Triumph Hurdle on Friday, is also one for the sire.

Albert Bartlett Novices' Hurdle winner Penhill, by Mount Nelson out of a daughter of High Chaparral, also showed the Derby winner's presence in a jumper's pedigree is no bad thing. 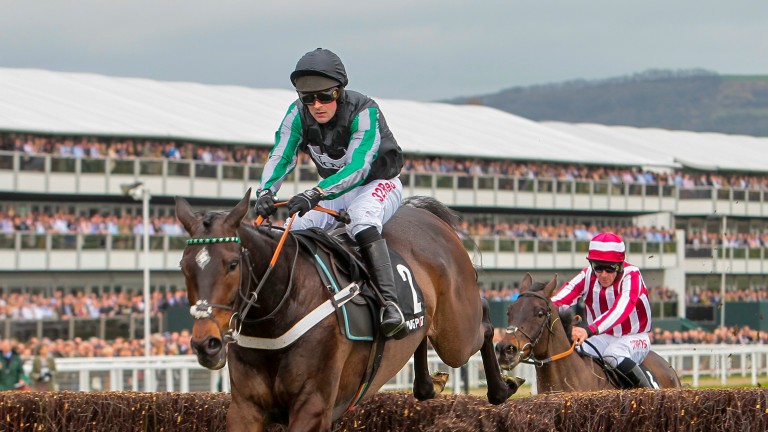 Altior: is by the late High Chaparral, a son of Sadler's Wells
Mark Cranham

Kudos to owners Richard and Lizzie Kelvin-Hughes for recognising the sire's potential early on. They have campaigned his sons Hadrian's Approach, a former winner of the Bet365 Gold Cup who sadly was fatally injured in the Kim Muir Fulke Walwyn Challenge Cup this week, and Different Gravey, a Listed-winning novice hurdler.

There are not many stallion sons of High Chaparral marketed towards jumps breeders, but one who stands a chance of making it is Karaktar, retired to Haras de Cercy this year and being given every chance with the dams of Triolo D'Alene and Vroum Vroum Mag in his first book of mares.

Irish trainers may have given the British a 19-9 spanking in the Betbright Cup for number of winners at the festival, but in the breeding stakes the home team had plenty to shout about.

Special Tiara: one of the British-bred winners at Cheltenham this year
Martin Lynch

Significantly, three of the all-aged championship events at the festival were won by British-breds: Special Tiara in the Champion Chase, Nichols Canyon in the Stayers' Hurdle and Sizing John in the Gold Cup. Sizing John joins Coneygree as the second British-bred Gold Cup hero in the last three years.

Not all the British-bred success was necessarily intended, mind you. Nichols Canyon, a son of Authorized, was bred by Rabbah Bloodstock for the Flat, and another Grade 1 scorer, Penhill, was produced by Newsells Park Stud also with a Flat career in mind.

Newsells Park Stud, a blue-chip Flat nursery, also bred Coral Cup winner Supasundae and Supreme Novices' Hurdle second Melon. They may not be the results the operation expected, but at least they show the farm's stock possess talent and toughness.

There was a flood (pun intended) of success for the roster of stallions at Boardsmill Stud that should see the County Meath farm kept busy with coverings for the next few months.

Willoughby Court was a fine advertisement for Court Cave, an unraced brother to Beat Hollow, by doing what few horses manage to do at the festival: making all and fending off all-comers to win a Grade 1 contest, in his case the Neptune Investment Management Novices' Hurdle.

He kindled memories of another high-class performer for the sire, Champion Court, who ground out a couple of big wins at Cheltenham having raced prominently.

Fayonagh, a daughter of Kalanisi, delivered her festival victory in very different circumstances. Out with the washing in the early stages of the Champion Bumper, she finished fast to beat her mostly male opposition. Her sire was already proven at the festival, having supplied Triumph and Champion Hurdle winner Katchit. 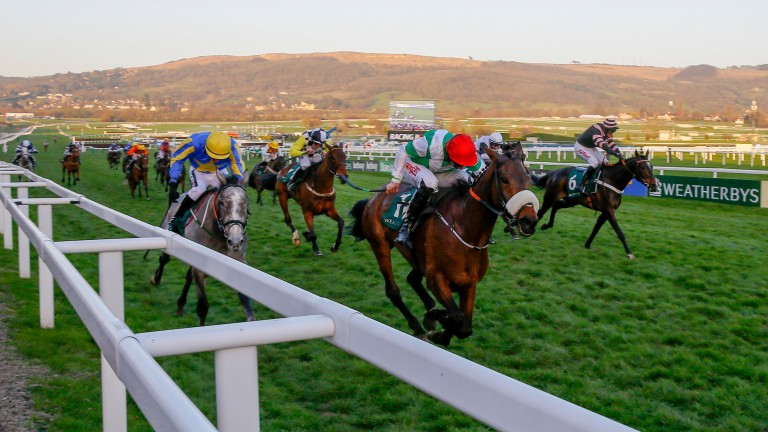 Mount Nelson was the third Boardsmill resident represented in the winner's enclosure at Cheltenham, after Penhill scored in the Albert Bartlett.

French import Califet was the only member of the roster not to sire a winner at the festival, although with only three arrows all week he did not do badly at all, with Cilaos Emery fifth in the Supreme and Calipto a close sixth in the Grand Annual.

It has been quite a year for the Flood family, owners of Boardsmill, as patriarch William was recognised for his contribution to the industry at the Irish Thoroughbred Breeders' Association Awards in January.

Inexpensive horses fight back at the festival

Having given a gloomy outlook on the lack of romance in the top tier of jump racing before the festival, it was a pleasure to see several less expensively sourced horses flourish last week.

Many races still fell to the leading owners' private purchases from France and the Irish point-to-point field, and we can only guess how stratospheric their prices were. Then there was Un Temps Pour Tout, a £450,000 auction acquisition, and Penhill, secured by owner Tony Bloom for 230,000gns from Tattersalls.

But the meeting kicked off with Labaik, a £25,000 purchase by owner Aidan O'Ryan and trainer Gordon Elliott from last year's Goffs UK August Sale, and later came Flying Tiger, bought by trainer Nick Williams for €38,000 from Arqana.

The dream so nearly came true for the smaller stable when Lil Rockerfeller, a £31,000 Doncaster purchase by Anthony Stroud Bloodstock and trainer Neil King, was just touched off by Nichols Canyon – who would have cost a small fortune as a Listed winner on the Flat – in the Stayers' Hurdle.