The unsung heroes who could one day raise a champion 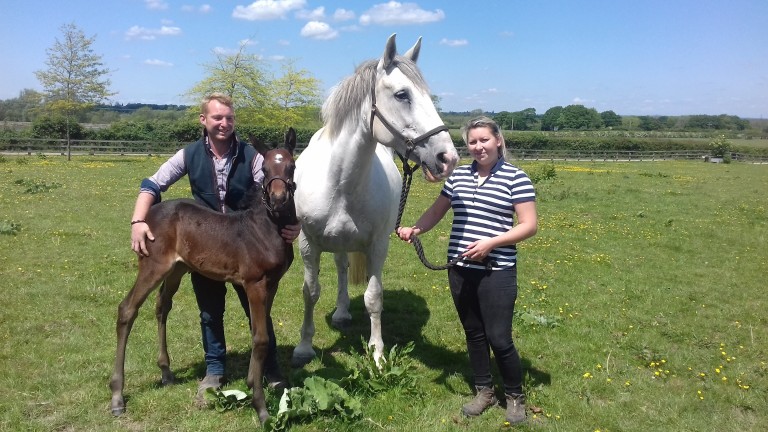 A grey mare and a leggy bay foal padding through their field in the East Sussex sunshine would be more likely to draw an onlooker into enjoying a moment of vicarious tranquility than arouse suspicion.

It is only upon closer inspection by those with a trained eye that would detect something a little different. As much as they embody the familial closeness of any mother and daughter, the mare is sturdy and old-fashioned, and even though her foal is still in a growing spurt, her head and anatomy are undoubtedly finer in definition.

The reason, should you not have guessed already, is because they are not related. Cara, an Irish draught, is caring for a Telescope-sired filly after the loss of her own mother on the residential wing of Fuller’s Foster Mares, something of an ethical orphanage founded by Bea Fuller and her husband TJ.

Their operation has been a commercial entity only for the last few months with the couple, a competitive eventer and showjumper respectively, having kept horses for clients in livery and run a foaling business. Six years ago a mare of theirs died giving birth and they learned on the job from a stud veterinarian in how to find the foal an immediate replacement.

The late Just The Judge’s Galileo filly and her foster mother are doing just fine!! pic.twitter.com/g83ndp6FkG

"When you’re in that situation, you’ve gone through quite a trauma losing a mare, and basically you suddenly find yourself in a bit of a hole, feeding a foal every hour through the night and you just don’t know what to do," Bea explains.

Those unacquainted with the industry might have been exposed to it on occasion by seeing the requests and offers on social media. Finding a foster, or offering one, tends to work on an ad hoc basis wherein a lactating mare can become available to care for a bereaved or rejected foal if it has recently lost its own. 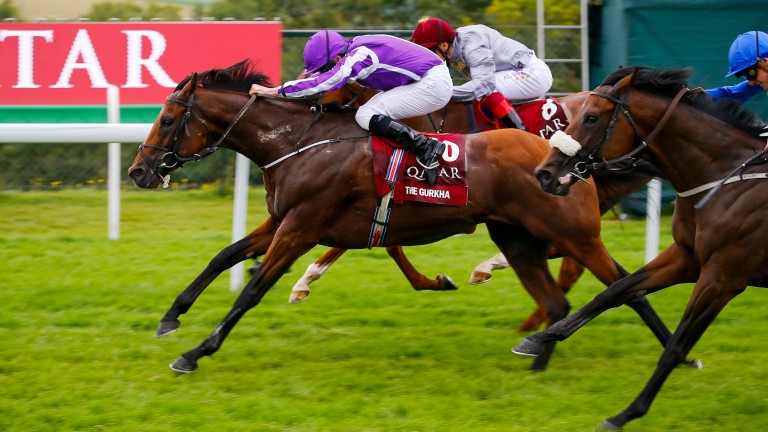 The Gurkha: Sussex Stakes winner required a foster mare before his exploits on the track
Mark Cranham
The youngster needs a guardian for its first three months and Bea has to act fast, either driving her mare to a stud, or receiving the foal at home. Although their venture is too new to have spawned any success stories on the track, being fostered proved no hindrance to French Guineas winner-turned stallion The Gurkha or last year’s Chesham hero Arthur Kitt.

Yet it has also been one of breeding’s uncomfortable truths. Practices which might have been more acceptable in a more agrarian past, from studs quickly discarding a mare’s own foal in order for her to foster a more valuable thoroughbred prospect to the repugnant ways in which to ingratiate a new foal with her, cannot be part of a morally conscious present.

Which is where Fuller’s comes in. Bea has two potential options, first to hoodwink an older, barren mare into thinking she has given birth, through doses of the drug domperidone and then a prostaglandin hormone injection. Within a couple of weeks, she will be producing milk and be ready for active motherhood.

Second, she breeds various types of horses to be trained for other disciplines, such as hunting or riding clubs, and their more self-sufficient foals can be weaned several months earlier than thoroughbreds can, leaving the mare still in position to take on a replacement during the key racing breeding season.

"Irish draughts and the cobs are the best ones really, the milk is amazing, and with their nature they take on most babies," she says.

"But you still have to have a good-natured mare, so it’s sourcing the right ones.

"It fits in well with our foaling livery as we always have mares on standby. People don’t tend to want foals bottle-fed, they want them on a good mare, especially thoroughbreds going off to the sales. Bottle-fed foals can be quite bolshy."

TJ explains: "A foal in a stable on its own can deteriorate, it has no real reason to get up and wander about. If it has a mare with them, even if they’re not getting their entire feed, it does them the world of good, just learning the basics and some manners."

All the Fuller’s foals have a future and, to prove her point, Bea brings out Cara’s boisterous but charming estranged son Winston, already looking as if he will make a noble steed for someone in a few years time.

"In the past, mares would be put in foal to the cheapest thing people could find and the foal would almost be a by-product," says TJ.

"Whereas if you put a bit back into the breeding to give yourself a useful foal, it’s not going to waste, you’re not breeding for the sake of breeding." 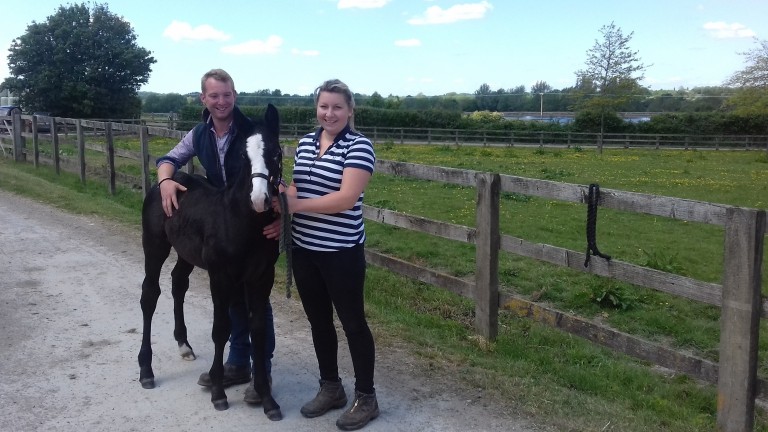 Fuller’s has spread by word of mouth and the power of Facebook, with ten equine nurses on the books and recommendations from the likes of horse guru Gary Witheford, who had cause to use them this year. Bea can receive half a dozen calls a week and has had to turn some clients away.

"The fact they’re ringing means it's coming to the point that we’ll need more mares," she admits.

Aside from helping to welcome and sustain new hope from melancholy beginnings, another pleasure the couple have gained is from reinvigorating their other 'domperidone' mares, the unsung heroes who tend to supply the back-up plan in an emergency.

"Every single one has been saved from being put down, they’re old mares, and I’m quite attached to them," she says. "You’ve saved a mare that’s saved a foal. You see these mares, they don’t have much of a life and suddenly they’ve got a foal at foot and they’re as happy as larry. It’s a really nice side to it."

She continues: "If you go out in the field, you wouldn’t notice who was a foster foal and who wasn’t. The mare should still whinny to them, and they should still follow their mum. There are just some who look a bit strange, because it’s a thoroughbred on a coloured cob."

Getting to know you

Before fostering takes place, the new arrival must be given a healthy top-up of colostrum, the mares' milk which is rich in matter to aid the immune system.

Then, there is the nervous period of hoping mother and child will bond.

"We have to put Vicks up the mare’s nose, so it can’t smell that it’s a different foal," Bea Fuller explains. "The mare will sweat a lot so we rub her sweat on the foal, and then when she’s ready - it depends on the mare but it can be from 20 minutes to an hour - you introduce the foal.

"Pretty much 99 per cent of the time, she’ll just take it - 'thank God, I’ve got a foal' - but we’ve picked our mares. You can get some who are too bright and go 'that’s not mine', or those who are too highly-strung and you can’t take her own foal away. 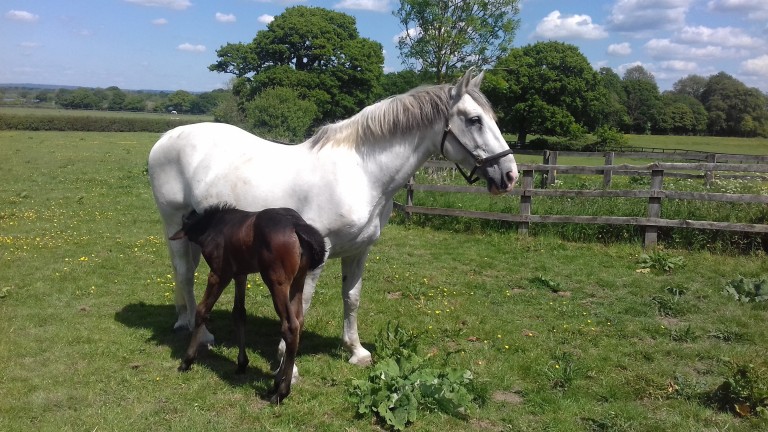 Cara and her foal are well bonded
"The domperidone mares are naturally maternal, you get that feeling if you put them in a stable next to each other and they want to get through the stable to get to the foal. That’s the sort of mare you need.

"It can take five to 12 hours of waiting, but you tend to know within half an hour of fostering if it’s going to work.

"Once the foal is on the mare, you’ll be watching them closely for 24 to 48 hours on the cameras, but once they’re on, it’s going to be all right."

FIRST PUBLISHED 7:02PM, MAY 25 2019
The fact they?re ringing is coming to the point that we?ll need more mares