James Thomas reports on some high-end trading at Park Paddocks 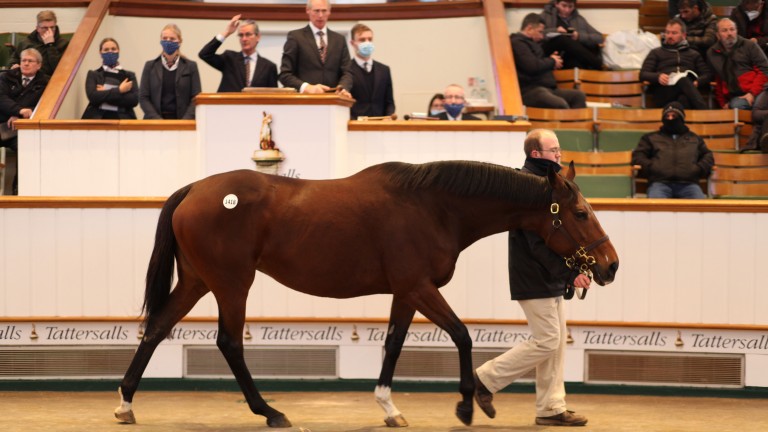 Few assets possess the global currency of the thoroughbred pedigree, and an international three-way bidding battle duly saw the well-related Crimson Rock bring 450,000gns on day one of the Tattersalls December Mares Sale.

From the US there was Mt Brilliant Farm's Greg Goodman, who was involved from early on from his position opposite the rostrum, while down in the gangway James Wigan proved the most committed domestic participant.

However, both players had to give way to Shingo Hashimoto, who delivered the decisive bid on behalf of Katsumi Yoshida, owner of Japanese powerhouse Northern Farm.

Hashimoto said that, thanks to her pedigree, plenty of options remained open for the winning daughter of Fastnet Rock, who was offered in foal to Highland Reel by Newsells Park Stud as part of the partial dispersal of stock from Al Shahania Stud. 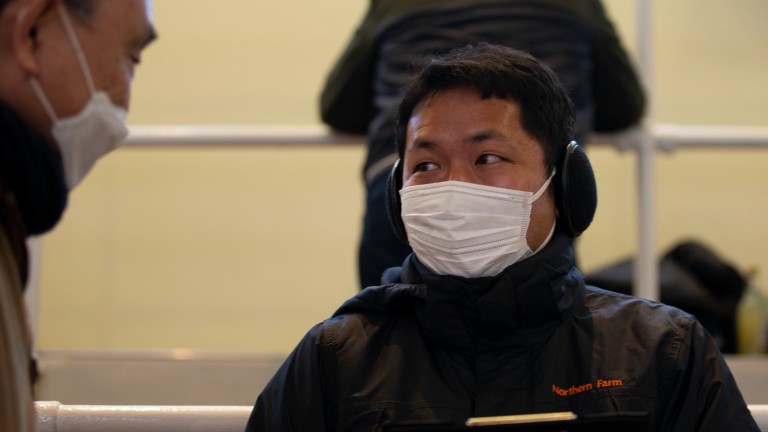 The seven-year-old Crimson Rock, who was signed for by Spendthrift Farm at $1 million as a Keeneland September yearling, is out of Maryinsky, making her a sibling to four winners, most notably four-time Group 1 heroine Peeping Fawn and Criterium International scorer Thewayyouare.

Peeping Fawn was among a select group of mares that Coolmore sent to Japan to visit the late, great Deep Impact, a mating that resulted in the breeding of September, a Listed winner and Group 1 runner-up when beaten just a nose by Laurens in the Fillies' Mile. September was also third in the Moyglare Stud Stakes and Breeders' Cup Juvenile Fillies Turf.

"We haven't decided whether she will go straight to Japan yet or who her next covering sire will be," said Hashimoto. "Contrail could be a candidate, although we don't know at this moment. Of course this dam line is one of the best so the pedigree is very attractive, and Fastnet Rock is doing well in Japan as well, so that looks a good match for us too."

Deep Impact's champion son Contrail joins the Shadai Stallion Station roster for 2022, having bowed out of his racing career with victory in Sunday's Japan Cup, his fifth Grade 1 success.

Just a few lots later Charlie Vigors from Hillwood Stud appeared on the back stairs and landed a bid of 400,000gns to secure Sun Tide, a winning half-sister to Juddmonte's six-time Group/Grade 1 winner Midday. The daughter of Siyouni was offered in foal to Tweenhills' 2,000 Guineas hero Kameko.

Just two of the four-year-old's dams fit on the page, such is the strength in depth in her pedigree. Midday has bred four winners of her own, including dual Group 3 scorer Midterm and the Listed-winning Mori, while her dam Midsummer's nine successful sons and daughters feature the Group 3 winners Sun Maiden and Hot Snap, as well as Listed scorer Midsummer Sun. 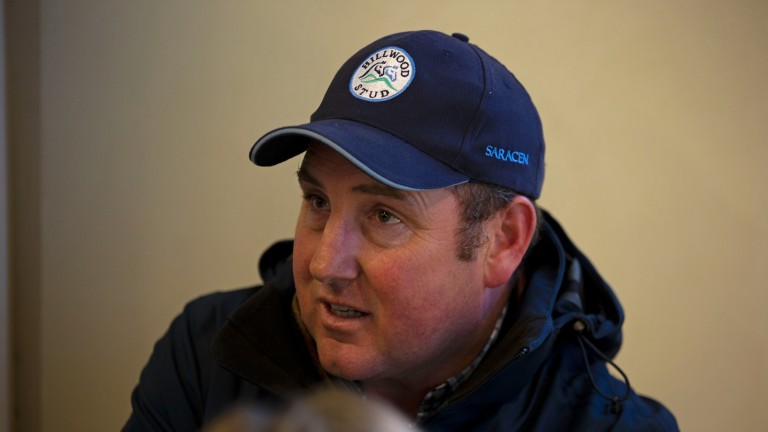 In turn Midsummer is a sibling to the Group 1-winning celebrities Elmaamul and Reams Of Verse.

"She's for a new English-based client and will be coming to us and the progeny will be sold on," said Vigors, who signed as Notting Hill Bloodstock. "I think this is the client's first horse; they want to have a boutique broodmare band, so there's no better family to buy into. They might race a filly or two and sell the colts, but plans are fluid at the moment.

"She's an exciting mare and she's got a nice commercial cover if they do decide to sell. She's a neat, attractive mare so there's lots of stallions who'll suit her next year. That's it for today but we have others on the list for tomorrow."

The Juddmonte draft contributed 1,342,000gns to turnover on day one, with Sun Tide's sale immediately preceded by Tacitly, who fetched 375,000gns from Robert Nataf of Horse France.

The four-year-old's dam, Falmouth Stakes heroine Timepiece, is a sibling to eight winners, including Criterium de Saint-Cloud heroine Passage Of Time, whose name has been in the headlines of late thanks to the exploits of her promising stallion son Time Test. Tacitly was offered in foal to Juddmonte's champion sire-elect Frankel, meaning the resulting foal will be bred on the same cross as this year's Derby hero, Adayar.

"I don't think I can say, but it's not me!" joked Nataf when asked who the mare's new owner was. "The pedigree speaks for itself though, and she's in foal to the right stallion so she wasn't too much of a head-scratcher. That price was within where we wanted to play."

Nataf's purchase seems likely to head to the picturesque paddocks at Ecurie des Monceaux, and when asked about future mating plans the agent deferred to stud director Henri Bozo, who said: "We will have to discuss, but maybe she could be one for Wootton Bassett."

Mags O'Toole's name appeared on the docket of two big purchases on the day, including the 330,000gns Model Guest, who was knocked down to Eddie O'Leary and offered by The Castlebridge Consignment carrying to Kingman.

The winning daughter of Showcasing boasted some all important black type having finished third in the 2018 Sweet Solera Stakes. O'Leary said: "She’ll come back to Ireland and if she produces something like herself we’ll be ok. She's a beautiful mare and there are some very good crops coming through for Kingman."

Later in the session O'Toole also signed for the Lancashire Oaks runner-up Lady Hayes at 310,000gns.

The three-year-old daughter of Kodiac, who was bred by Gigginstown House Stud from the Listed-winning Hurricane Run mare Andry Brusselles, previously carried the colours of George Bolton having been sold to Kerri Radcliffe at 280,000gns at Book 1 as a yearling.

"She's a lovely physical who's already got black-type but will probably continue racing," said O'Toole.

Agent Amanda Skiffington was another busy member of the buying bench, with two six-figure purchases made for receipts totalling 540,000gns. First came the 290,000gns Tested, the ten-year-old Selkirk mare who carried the Juddmonte silks to victory in the Group 3 Fairy Bridge Stakes during her time in training with Dermot Weld back in 2015.

She has since bred two winners, including Deodar, who was last seen finishing runner-up behind Flaming Rib in the Listed Doncaster Stakes. The mare was offered in foal to Deodar's sire, Bated Breath.

The five-year-old daughter of Camelot won three times for OTI Racing and Jessica Harrington and was stakes placed on a handful of occasions. She is a sibling to three winners, including Zetland Stakes scorer Max Vega, a son of Lope De Vega whose success may have helped inspire Skiffington and O'Connor's acquisition.

"She's for a client who's a shareholder in Lope De Vega, so she will go to him next spring," said O'Connor. "I liked her as a race filly, she was a very good consistent filly who turned up regularly in good stakes races. I'm a fan of runners and I like Camelot as a broodmare sire. Her dam has already bred Max Vega too so we know that the cross works. She will come back to Ballylinch."

As a young, well-bred, high-achieving mare in foal to a promising sire, Berend Van Dalfsen's Nooramunga looked the complete package and duly fetched 270,000gns from Jill Lamb when presented by Barton Sales.

The five-year-old daughter of Siyouni won a Longchamp maiden while in training with Mikel Delzangles and added some important black type to her CV when third in the Listed Prix Amandine. She is out of Turtle Bow, a Group 2-winning sister to Turtle Bowl, and was offered in foal to Haras de Bonneval's rising star stallion Zarak.

"She was bought for Newsells Park Stud," said Lamb. "She's in foal to a very exciting young stallion so we're delighted to get her. There's a lot of quality about her, particularly in the way she walked. She's a black type Siyouni mare so she's an exciting one to have." 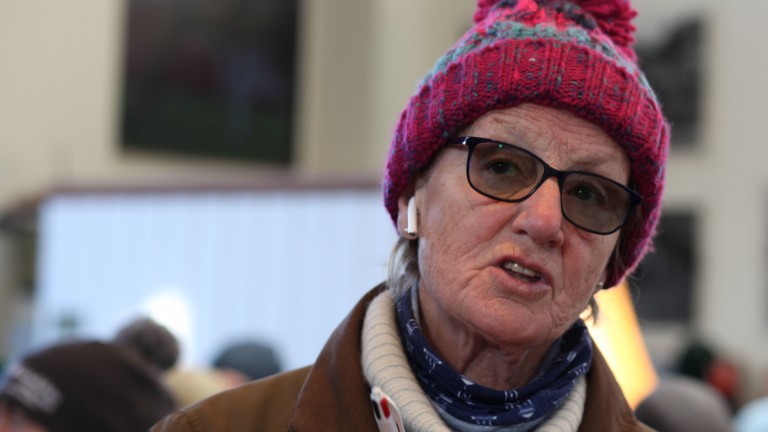 Jill Lamb: "She's in foal to a very exciting young stallion so we're delighted to get her"
Laura Green

Newsells Park Stud, which was bought by tech entrepreneur Graham Smith-Bernal back in June, is also selling a number of mares in Newmarket this week, including Waldlied, a Group 2-winning three-parts sister to Arc hero Waldgeist who is in foal to Kingman.

"We are selling a few this week so we'll be looking to replace those, although unfortunately they're all coming in the wrong order really!" continued Lamb. "We wanted to get one under our belt today so it's nice to have her. A lot will depend on what happens with Waldlied tomorrow, but she's quite late so Graham said we've got to be brave before she goes through."

Zarak, a son of Dubawi and the brilliant Zarkava, has made a big impression with his debut crop of two-year-olds, which includes 16 winners supplied as a strike rate of 52 per cent. Among that number are the Group 3-winning Lizaid and Listed scorer Parnac, whose exploits have helped propel their sire to a fee of €25,000 for 2022.

"Around 12 months ago people might have wondered about Zarak, but now everyone says you must have a Zarak!" added Lamb. "He looks very much like Time Test to me, I was watching videos of him with Tom Blain [of Barton Stud] this morning and he looks like a beautiful horse."

Cumanis looking for the royal touch

The Cumanis were responsible for landing the session's first eyecatching acquisition when a bid of 180,000gns was required to secure Dusty Dream, carrying to Showcasing, from The Royal Studs.

The four-year-old daughter of Dubawi is out of Memory, winner of the Albany and Cherry Hinton Stakes who went on to breed four winners for the Queen. Her brood includes Grade 2 Belmont Gold Cup Invitational scorer Call To Mind and Recorder, who won the Group 3 Acomb Stakes before retiring to Montfort et Preaux, from where he has sired nine first-crop winners.

"She has been selected and bought for a client to come back to Fittocks Stud," said Sara Cumani, who signed as SH Bloodstock.

"We're hoping to give the farm a royal touch! It's a beautiful pedigree, and although Memory has had a lot of colts, she has a 2020 filly by Dubawi and a 2021 filly by Night Of Thunder, so we will hope both can do something. Dusty Dream is in foal to Showcasing on an early cover, which is another positive, but we still need to discuss future covering plans with our client."

The December Mares Sale continues on Tuesday at 9.30am, with the likes of Flotus, Mystery Angel and Waldlied among the lots due to come under the hammer.