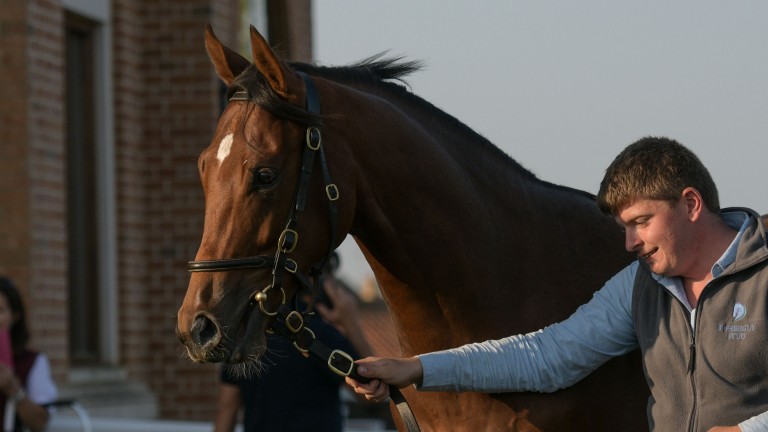 The Teofilo brother to Gear Up exits the ring after setting a Tattersalls Ireland September Sale record when bought by the Hong Kong Jockey Club for £325,000
Melanie Sauer
1 of 1
By James Thomas, Sales correspondent 1:54PM, SEP 20 2021

Some 12 months ago the Tattersalls Ireland September Yearling Sale provided Clare Manning of Boherguy Stud with two days she won't forget in a hurry.

The County Kildare operation smashed the auction's record price during the opening session when selling a brother to Gear Up to the Hong Kong Jockey Club for £325,000, and 24 hours later supplied the sale's second top lot when Robson Aguiar, acting on behalf of Amo Racing, gave £190,000 for a brother to New Treasure.

This time around Boherguy Stud offers ten of the 489 catalogued lots at the latest edition of the September Yearling Sale, which is spending a second successive year in Newmarket and kicks off on Tuesday at 10am.

"It was unbelievable," said Manning when reflecting on the events of 2020. "Obviously when you go to the sales each year your aim is to get the best out of your horses and to get as much as you can for them for your clients, but to get the two top lots was absolutely amazing.

"To do it in only our second year consigning was great, it could take years to get that kind of result, but you have to come back down to reality though as you know it's not going to happen every year." 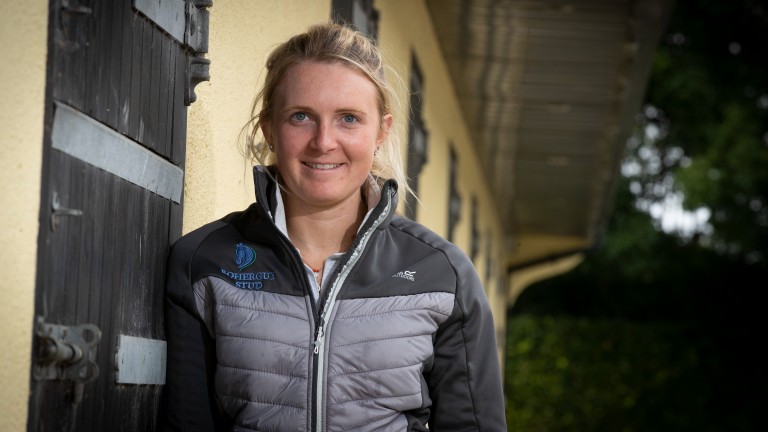 Despite Manning not allowing herself to get carried away after last year's record-breaking highs, her draft this week contains plenty of lots worth getting excited about.

She said: "I've ten horses here and they're typical of what people look for in their Fairyhouse yearlings. It's a sale that a lot of trainers buy from, not just the agents, so we've brought the kind of athletic types that suit this market.

"Years ago the pedigrees might not have been as strong as they are now, but that side [of the September Sale] has really grown in the last few years."

Manning is well placed to comment on the rising standard of pedigrees in the catalogue, as she presents a handful of eyecatchers, including a close relation to the aforementioned Group 1 Criterium de Saint-Cloud winner Gear Up and last year's record-breaking top lot, both of whom are by Teofilo.

"He's a nice physical and although he's a very late May foal, he doesn't look like it at all and he's got a great temperament," Manning said of the son of Parish Hall, who was bred by her grandfather Jim Bolger and is catalogued as lot 42.

"Although they're by different stallions this colt and Gear Up are very similar looking, and the mare definitely throws quality into her offspring."

The Boherguy Stud draft also contains a half-brother to Sweet Solera Stakes scorer Star Of Emaraaty whose sire, Galileo Gold, graduated from the 2014 September Sale before going on to land the 2,000 Guineas and St James's Palace Stakes for Hugo Palmer and Al Shaqab Racing. 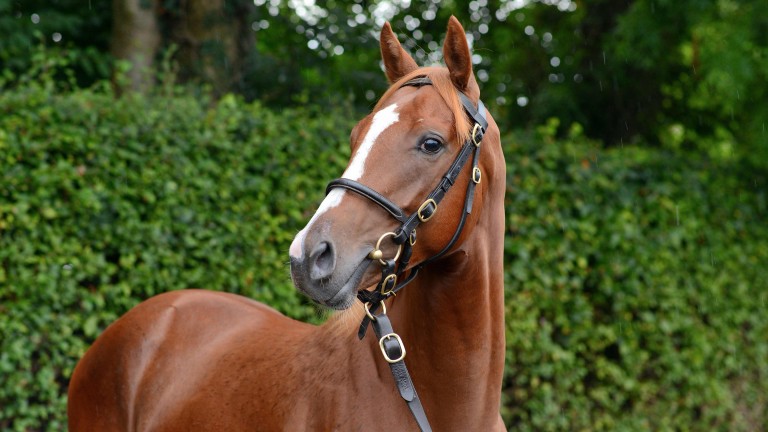 "He's a lovely colt and a great mover," Manning said of lot 113. "He's a lovely size and has an unbelievable temperament. He's been very straightforward and so far he seems to be going down well."

Manning also offers a trio of fillies who were bred by Godolphin, including a daughter of Exceed And Excel with a particularly exotic pedigree being out of the Brazilian-bred Top Hat mare Mandinga, a Group 2 winner and Group 1-placed in her home country.

"It's not something you see too often," Manning said of lot 151's pedigree. "She's out of a Brazilian-bred mare who won a Group 2 and was placed in a Group 1 in Brazil. The mare has since been to Dubawi and Shamardal, and this is her third foal.

"Soundness is the main thing when you're looking for a racehorse, if you don't have a sound individual you've no horse to run, so a mare like this who's run a lot and to a very high level on the fast ground they get in Brazil, she's definitely been tough and sound and well able to stand up to her racing."

There is also a Golden Horn filly from a pedigree rich with black type (414), as well as a strong-looking daughter of Dark Angel (418), of whom Manning said: "She's out of a New Approach mare who was Listed placed and she's a lovely filly. It's a bit unfortunate that a couple of her siblings died when they were still young, but her half-sister Theory Of Time was a nice horse and this is a lovely individual. She's another who's been going down very well." 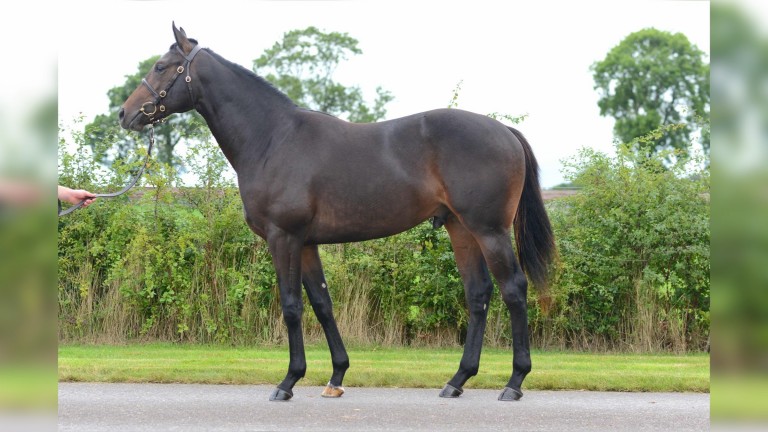 Boherguy's is not the only draft to contain some eyecatching pedigrees, as there are also Churchill siblings to Curly (46) and Pretty Perfect (167) who were bred by Coolmore and are consigned by The Castlebridge Consignment and Baroda Stud respectively, while Castlehyde Stud sends a Gustav Klimt half-brother to this year's Group 3-winning juvenile Have A Good Day.

Moreover, plenty of past graduates have done their bit to keep the September Sale in the headlines in recent months, with Helvic Dream winning the Group 1 Tattersalls Gold Cup, Sonnyboyliston landing the Irish St Leger and Go Bears Go proving himself one of the best two-year-olds around with victory in the Group 2 Railway Stakes.

The promise-filled catalogue and the sale's growing roll of honour are not the only factors giving Manning confidence ahead of the two-day event, as she noted that trade elsewhere this year has proved particularly buoyant. 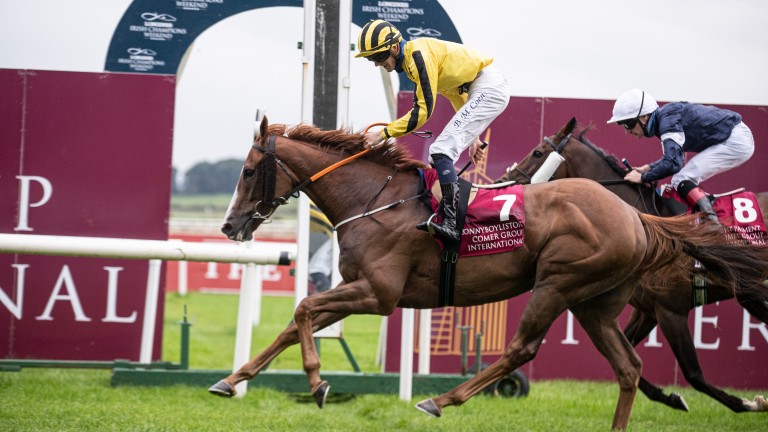 "I think the market has been very strong this year," she said. "The clearance rate in Doncaster was unbelievable and the prices at the Somerville were tremendous, after that sale got a bit of a reboot from Ascot.

"There's plenty of money being spent and overall it seems like things have got off to a good start, so you'd have to be pretty optimistic that it's going to be a good sale this week."

All yearlings catalogued will be eligible for the €300,000 Tattersalls Ireland Super Auction Sales Stakes, which takes place at the Curragh on Irish Champions Weekend. Part 2 of the September Yearling Sale follows directly on from Part 1 on Wednesday evening.

FIRST PUBLISHED 1:54PM, SEP 20 2021
There's plenty of money being spent and overall it seems like things have got off to a good start, so you'd have to be pretty optimistic