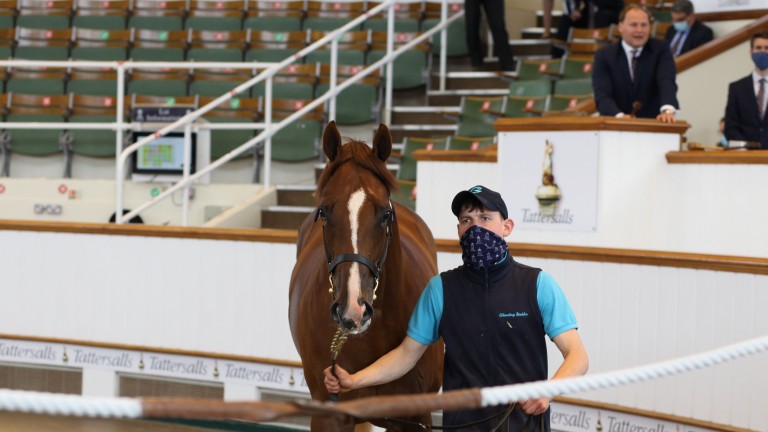 A colt from the debut crop of Postponed who fetched 135,000gns emerged as the clear front runner in a solid market at Friday's renewal of the Tattersalls Guineas Breeze-Up Sale.

There was plenty of action on the Glending Stables-consigned youngster, but just when auctioneer Matt Hall's gavel was raised Richard Brown from Blandford Bloodstock emerged from behind the stairs to the left of the rostrum and gestured the decisive 5,000gns increase.

"I'm delighted to get him," said Brown after signing the six-figure docket. "He's been bought for my resale syndicate, the Never Say Die partnership. He'll be trained by David Simcock so he'll be given plenty of time. David is actually on his way to Goodwood so has absolutely no idea I've bought him or how much I gave, so I might be in for a bollocking!" 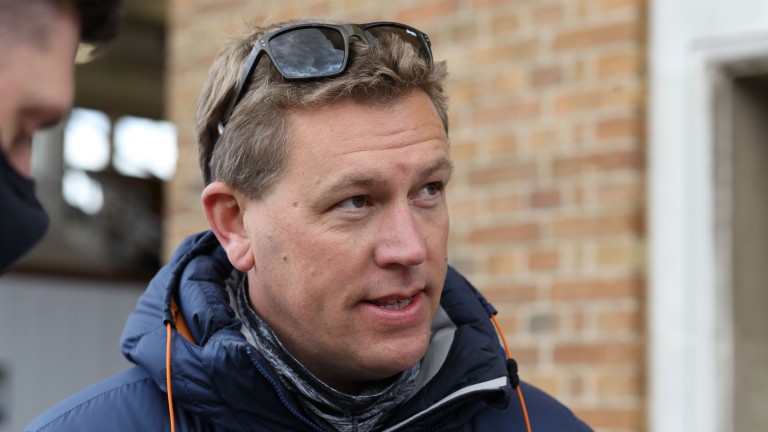 Richard Brown: "It wasn't a particularly speedy breeze but it was the style he did it in that impressed me most"
Laura Green

He added: "We thought he did a cracking breeze; it wasn't particularly speedy but it was the style he did it in that impressed me most, he's got a nice action and showed a great attitude. I like the fact that No Nay Never is sitting there under the second dam too. A client of mine, Andrew Stone, bred Postponed so I've followed him the whole way through and he's a young sire I'd give a big chance."

The colt, out of a Malibu Moon half-sister to the dam of No Nay Never, was making his second appearance at public auction, having been signed for by Peter and Ross Doyle at 20,000gns at the December Foal Sale.

His six-figure sale continued a hot run of form for Glending Stables, who also sold a Mehmas filly to Blandford Bloodstock for £150,000 in Doncaster last week. The County Kildare-based operation is run by Roderick Kavanagh, son of Antoinette and Peter Kavanagh of Kildaragh Stud. 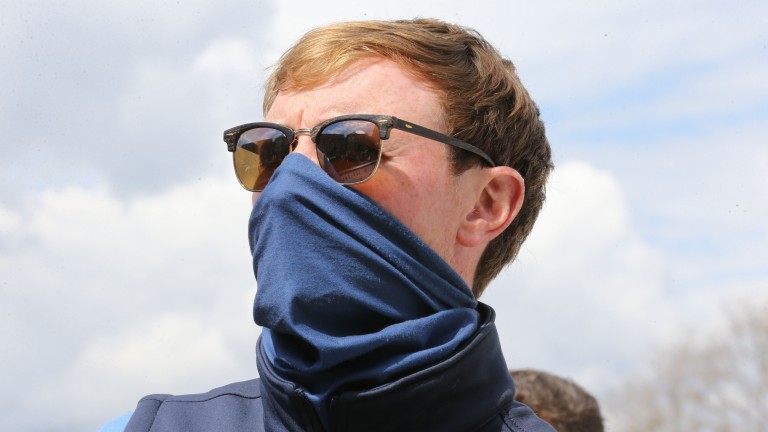 Roderick Kavanagh: "He's been one of the talking horses of the sales ground"
Laura Green

"We've been on a good run, I don't know what to put it down to but it's probably just good horses," said Roderick Kavanagh. "We've had a great team all winter too, we've got a lot of good riders and the horses have all been prepared right. Ours don't always look like they're going quickly, but they're clocking well."

On the Postponed colt, Kavanagh added: "He's always pleased us and is definitely a racehorse. He showed so well, did an impressive breeze and really fills the eye, even though he's quite a late foal. He sold brilliantly and has been very popular, he's been one of the talking horses of the sales ground."

The second six-figure lot came late in the session when David Redvers struck a 105,000gns bid to secure the Mehmas colt out of Cheworee offered by Nanallac Stud.

The colt, a brother to a dual winner in Italy, made it third time lucky having been a vendor buyback at €5,000 as a foal before failing to sell at just £9,000 during last year's Tattersalls Ireland September Yearling Sale. 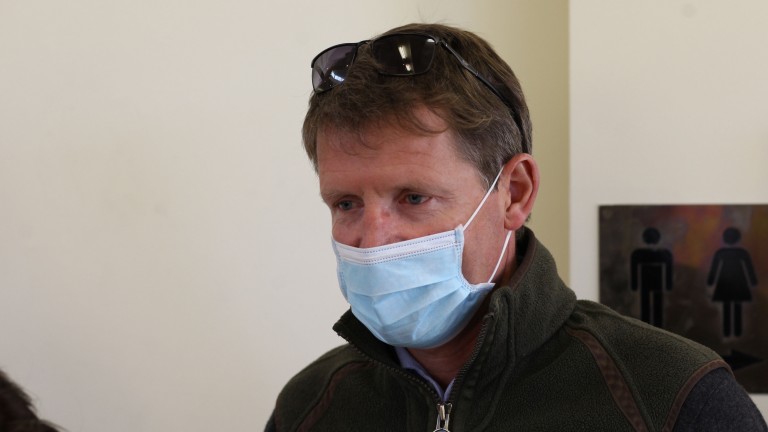 David Redvers: "He's by a very good stallion and exactly the kind of horse you'd expect to see at a breeze-up"
Laura Green

"I only know that he'll be trained in Newmarket so Sheikh Fahad can keep an eye on him and give the trainer plenty of stick!" quipped Redvers. "He's by a very good stallion and exactly the kind of horse you'd expect to see at a breeze-up. I just loved him and the guys who sold him have done a very good job. Hopefully he'll be a decent two-year-old."

The colt had been prepped on behalf of Nanallac Stud by Ian McCarthy, who said: "He's a horse who had a great preparation and we've liked him all along. We've had plenty of interest in him in the last couple of days and he did a lovely breeze under Micky Cleere. 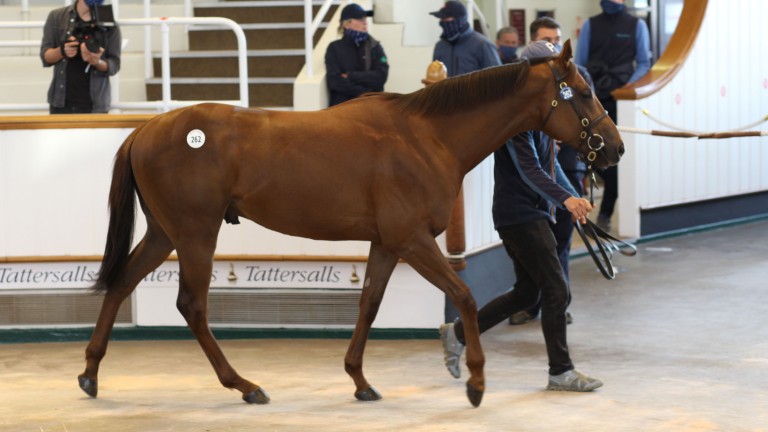 The Mehmas colt out of Cheworee offered by Nanallac Stud who was the second highest lot sold at 105,000gns
Laura Green

"I owned him with two friends of mine who pinhooked him as a foal for €3,000. I suppose it's lucky that he didn't sell as a yearling now! He's developed as time went on and got much stronger and he's really turned a corner in the last eight weeks. He's the only breezer I've done this year, but hopefully we'll be able to reinvest and get a few more now."

This was the second good result that McCarthy, who rode around 95 National Hunt winners during a spell with Dessie Hughes, has enjoyed in the Park Paddocks ring in recent times, having sold wide-margin bumper winner Ballybough Native to Henry de Bromhead for £195,000 during the Tattersalls Cheltenham March Sale.

Michael O'Callaghan has been busy restocking throughout the breeze-up season and added eight more two-year-olds to his string on Friday at a cost of 409,000gns. The most eyecatching of his acquisitions were the 95,000gns Magician colt and 82,000gns Postponed filly, both consigned by Aguiar Bloodstock, and a 75,000gns son of Dark Angel offered by Tally-Ho Stud.

"The Magician is a lovely horse, he did a good breeze and was very professional," said O'Callaghan. "He came highly recommended, he vetted cleanly so everything was right about him. He's bred to be a miler, but he has plenty of pace as well so we’ll kick on with him.

"The Dark Angel is a lovely horse too, he did a very nice breeze visually, he has great use of himself. He might not have clocked for some people, but for the type of horse he is I thought his time was good enough. He came from a great hotel that we have been very lucky with before and I think he might be a bit of value long term."

The Magician colt, a half-brother to Italian Listed scorer Secret Sharp, returned a tidy profit having been pinhooked by Aguiar Bloodstock at just 14,000gns, while the Postponed filly proved to be another inspired Aguiar purchase having been picked up for a mere 4,000gns during Book 3 of the Tattersalls October Yearling Sale.

Doyle returns to the source of success

A pinhooking mission to Baden-Baden yielded a good result for Church Farm and Horse Park Stud as a colt by Sea The Moon picked up for €40,000 was resold to Peter and Ross Doyle for 82,000gns.

"He's a lovely individual and we're huge fans of the sire, like most people," said Ross Doyle. "He comes from a great home, we've bought the likes of Mehmas from John Cullinan and Roger Marley before, and trainers love getting horses from them as they're so well educated. He'll go into training with Jim Boyle for established clients." 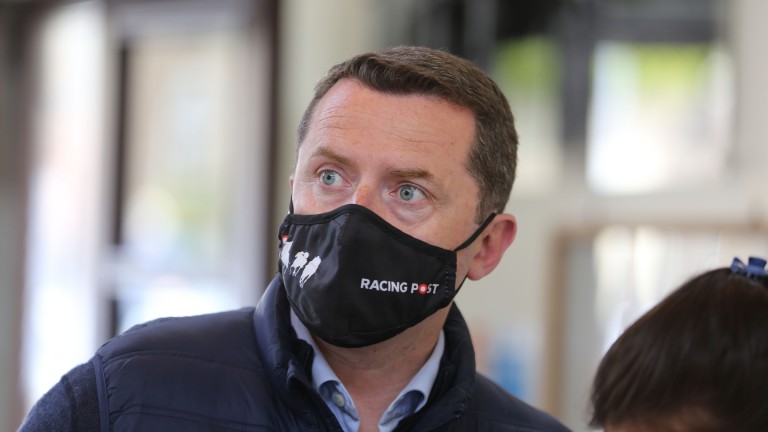 The colt, already named Herzbube, had an usually lean pedigree page featuring exclusively German form, but with Sea The Moon's profile in the ascendancy Cullinan said they had been confident buyers would see beyond the unusual lineage.

"We split up the chores last autumn and Roger went over to BBAG and bought this horse," said Cullinan. "We're very keen on the sire, as everyone is now. It's a light enough pedigree, there's plenty of space for notes on the page! But he's a lovely individual by a top sire and we liked him a lot."

Richard Brown was not the only member of the Blandford Bloodstock team to get involved in the action, as Tom Goff also dipped into the market to secure two of the top ten lots, namely Glending Stables' Ribchester filly at 80,000gns and the Almanzor colt from Kilminfoyle House Stud at 75,000gns.

"I was underbidder on three or four Ribchester yearlings last year and there's a big word for them among the trainers," said Goff after signing for the filly from the further family of Millenary.

"Every trainer I speak to tells me they have one or two they really like. I thought this was a beautiful filly, she ticks all the boxes as a two-year-old type who could go on at three. She clocked a good time and has plenty of quality. She'll be staying in Newmarket." 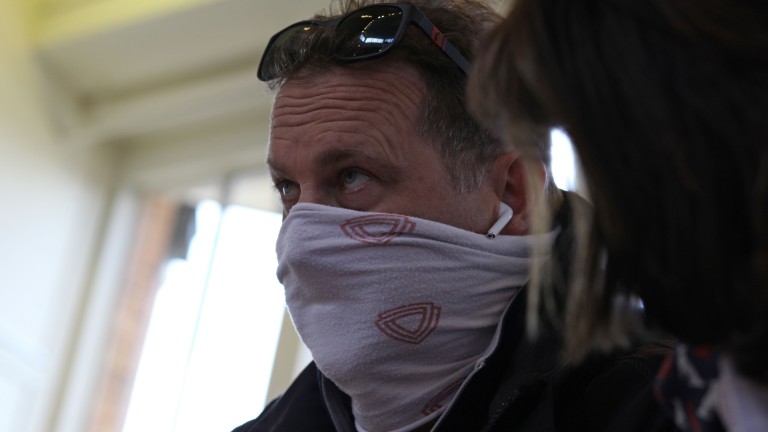 Tom Goff: "Every trainer I speak to tells me they have one or two Ribchesters they really like"
Laura Green

On the filly, who is out of a daughter of Irish Oaks runner-up Roses For The Lady, Glending Stables' Roderick Kavanagh added: "I'm delighted and it's a great return for a lovely filly. She was fourth-quickest [at the breeze], we had lots of punters on her and she's a stand-out physical."

The Almanzor colt, a €52,000 pinhook signed for by Five Star Bloodstock, possessed one of the catalogue's more eyecatching pedigrees, being out of the Group 1-winning Waikika.

Goff said: "He's a lovely staying horse out of a Group 1 winner and by a very exciting young sire. He'll need a bit of time but I'd be very hopeful he can make up into a nice seven-furlong or mile type."

Bromley and King back in action

Highflyer Bloodstock's Anthony Bromley and Alan King have plundered past Guineas Sales to great effect having secured the likes of Trueshan and Tritonic. The duo were back in action on Friday when spending 173,000gns on four lots, led by a 75,000gns Noble Mission colt offered by Powerstown Stud.

"We've got a few owners interested in buying and this is one of our favourite sales so this is the first buy and we've a few more to get," said Bromley. "This horse is very, very handsome and he moved like a dream so he just kept selling himself to us. 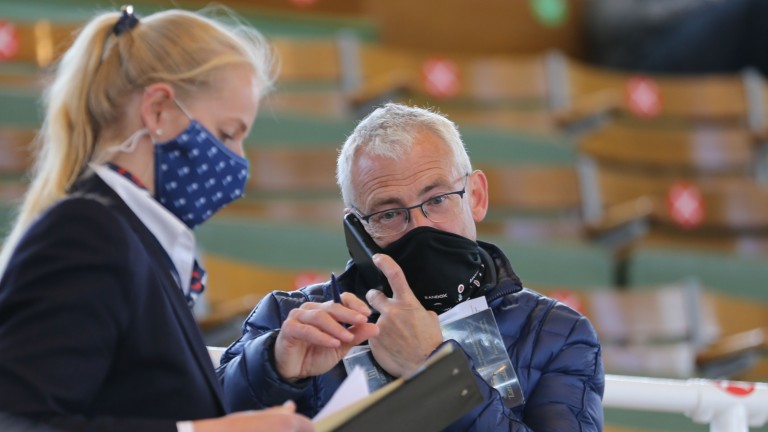 Anthony Bromley: "This is one of our favourite sales"
Laura Green

"We don't normally go after American-breds but Noble Mission is a brother to Frankel - his progeny seem to like softer ground - and he just looks like a nice back-end two-year-old who'll make a nice three-year-old. He'll be perfect for Alan."

The colt, who is out of the Louis Quatorze mare Hope's Diamond, provided Powerstown Stud with a successful pinhook after Tom Whitehead picked the youngster up for just $9,000 at Fasig-Tipton last year.

Trade simmered away throughout the session and, following a few notable hot spells, the final figures duly made for positive reading.

A significantly expanded catalogue helped turnover increase by 68 per cent year-on-year to 4,492,250gns, but arguably the most impressive metric was the median, which showed an uptick of 42 per cent to 24,500gns.

The average was also up, rising by five points to 29,950gns. The clearance rate was a perfectly healthy 82 per cent as 150 of 184 offered lots found a buyer.

At the close of play Tattersalls chairman Edmond Mahony said: "A median bettered only once this decade at the Tattersalls Guineas Breeze-Up Sale combined with an average and turnover which both compare favourably with the 2019 and 2020 renewals are all positives to take from today's sale, as has been the consistent domestic demand at all levels of the market.

"Similarly, while not quite matching the unprecedented levels at the recent Craven Breeze-Up Sale, the clearance rate has also held up well, especially considering a significantly larger catalogue than usual and the disruption to overseas participation owing to the current widespread travel restrictions.

"We can also reflect on a Guineas Breeze-Up Sale which has produced numerous impressive pinhooking triumphs, as ever reflecting the expertise of the consignors, and another sale which has underlined the importance of the Tattersalls live internet bidding platform which has yet again proved to be invaluable, particularly for overseas buyers unable to attend the sale.

"COVID continues to test us all, but once more we have experienced trade of remarkable resilience and a collective determination from all involved to explore every avenue to provide as vibrant a market as possible in the face of considerable obstacles."

FIRST PUBLISHED 8:58PM, APR 30 2021
I only know that he'll be trained in Newmarket so Sheikh Fahad can keep an eye on him and give the trainer plenty of stick!