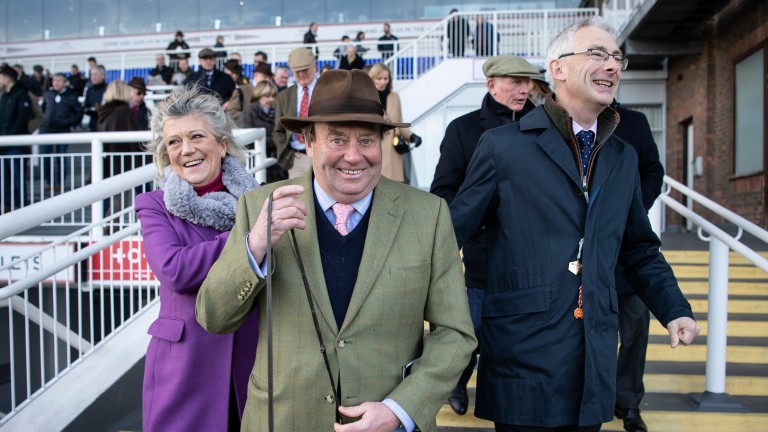 Goffs UK hosted the second edition of the Yorton Sale on Thursday and the boutique auction, held at the historic farm in Welshpool, produced a solid session of selling.

At the close of trade, Yorton Farm owner David Futter said: "We are delighted. Given everything that is happening right now we have been very lucky to have been able to hold this sale, and the level of support has been humbling.

"We see a big future for this sale, it really is a unique event on the sales calendar and we hope people have enjoyed it. I want to pass on a big thanks to the Yorton team who have once again put in a huge effort and to Goffs UK for all their help. We are looking forward to 2021 already." 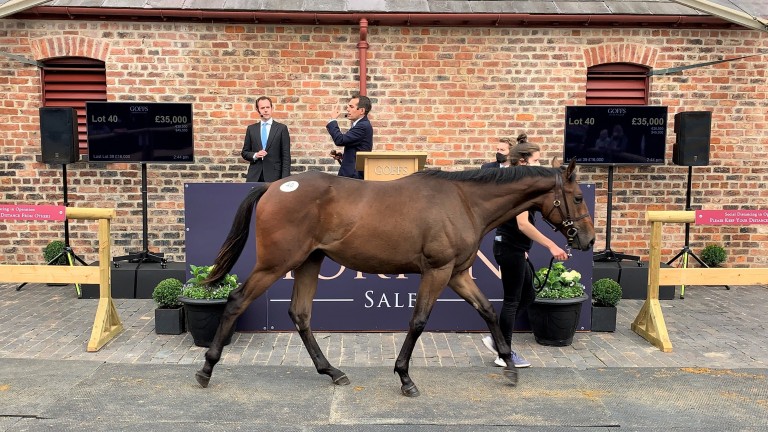 Lot 40: the Blue Bresil gelding bought by Brian Griffiths for £35,000
Claudia Claydon
The sale received a major vote of confidence from leading agent-trainer combination Anthony Bromley and Nicky Henderson, with the pair securing the £60,000 top lot for an owner within the Seven Barrows ranks.

The sales-topper was sold by auctioneer George Stanners, who said: "Sometimes everything just falls into place and this lad has it all; sire, pedigree and a fabulous model to back it up."

The son of Blue Bresil, one of ten National Hunt yearlings to be offered, is from a family Henderson knows well, as the colt is a half-brother to the trainer's former Grade 2-placed performer Thomas Campbell.

"Nicky knows the family well so he was very interested in the horse," said Bromley. "He looked like the nicest young horse at the sale and it's obviously a great pedigree. He's been bought for an existing owner of Nicky's."

On trade at the second edition of the Yorton Sale, Bromley added: "I thought there was good, solid trade in a tough environment at the moment. They got horses on the market and there was a good crowd here, there was a little bit of bidding online too.

"For a young sale in only its second year, it was always going to be a tough day given the current climate, but I think the Futters and Goffs UK did a good job in tough circumstances."

Walters back for more

Another buyer who has thrown their support behind the Yorton Sale is Dai Walters. The Grade 1-winning owner bought last year's top lot, the £105,000 No Risk At All two-year-old Prince Des Fichaux, and also dipped into the market on Thursday when going to £50,000 for arguably the best-bred lot on offer.

The two-year-old son of Maxios boasts a pedigree so replete with black type that his second dam, Pretty Polly Stakes winner Fleur Royale, only just fitted on the catalogue page.

Nick Luck was on compere duties throughout the sale, providing introductions for the lots as well as running commentary on the live stream as the bidding was taking place, and said of the gelding: "You don't often see pedigrees like this at a National Hunt store sale."

The youngster is out of Champaka, a daughter of Caerleon who has produced ten successful sons and daughters, including the Group 3-winning Steel Princess, who in turn is the dam of Canadian International heroine Sarah Lynx, as well as the Grade 2-placed Falcon Rock and New Zealand Listed winner Tonton Macoute.

Other noteworthy purchases were made by Brian Griffiths, who went to £35,000 for a Blue Bresil yearling from the family of See More Business, while Peter Molony from Rathmore Stud and agent Tom Malone both went to £30,000 for two-year-old fillies by Blue Bresil and Clovis Du Berlais respectively.

Different to any other

Reflecting on the Yorton Sale, Goffs UK's managing director Tim Kent said: "Holding any sale during the Covid era has presented us with additional challenges, and none more than this unique sale which is very different to any other. But that is the appeal of the Yorton Sale and we are delighted with what we have achieved with David Futter and his team.

"The Yorton team had managed to compile a selection of horses that had significantly improved from last year's sale, both physically and on paper, and this fact was not lost on purchasers who helped to achieve a 78 per cent clearance rate, which is a positive result in any year.

"Although we were unable to entertain the same number of visitors as last year, and with much of the overseas bidding coming via telephone bids or the Goffs online platform, the atmosphere was very similar to last year's inaugural sale, which clearly demonstrates the unique appeal of this now annual event.

"A wonderful location combined with some beautiful horses and spirited bidding has led to a very good day in Wales and we would like to thank David Futter and his team for everything that they have done to make today possible. We wish buyers every luck with their purchases and we look forward to doing the same again next year – hopefully in easier circumstances."

FIRST PUBLISHED 1:03PM, SEP 14 2020
Given everything that is happening right now we have been very lucky to have been able to hold this sale and the level of support has been humbling