Group winners and performers among the Tattersalls August Sale entries 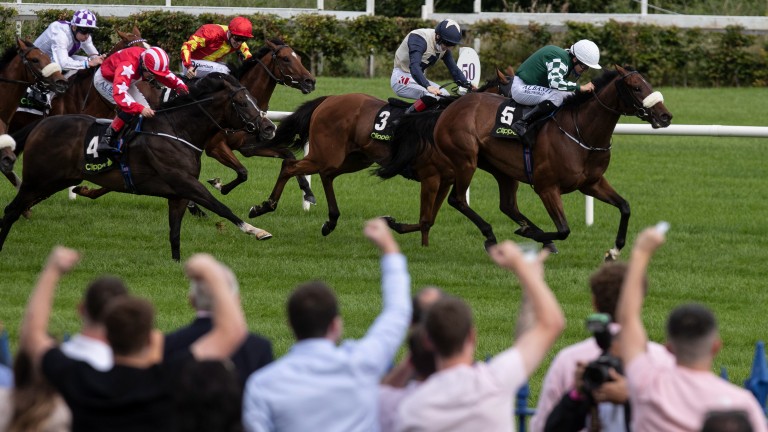 Drafts from Godolphin and Juddmonte are among the 360 lots that will be sold at the Tattersalls August Sale, an auction that will take place on a single day on August 31.

Among the highlights are Rolling The Dice (lot 167), a daughter of Mehmas who was third in last season's May Hill Stakes to Inspiral; last term's Boomerang Mile winner Real Appeal (280), who will be offered by Baroda Stud; the Group 3-placed Brentford Hope (260) who will be sold by Weathercock House Stables; and Sea The Shells (303), a three-time winning son of Sea The Stars.

Progressive three-year-olds on offer include Gemma Tutty's Mostly Cloudy (120), a son of Harzand who has won five times in a row this term; German 2,000 Guineas fourth Mr McCann (305), who won at Haydock on Saturday for Hugo Palmer; Shark Bay (304); a son of Australia who has won two of his last three starts for Aidan O'Brien; and Malabu Drive (234), Juddmonte's son of Frankel who got off the mark last time at Killarney.

Baroda Stud offers three of the six broodmares for sale including the Listed-winning Le Havre mare Summer Surprice (46) and Beautiful Gesture (48), a daughter of Shamardal, both of whom are in foal to Australia.

Tattersalls chairman Edmond Mahony said: "The Tattersalls August Sale was introduced for the first time in 2020 in response to Covid-related circumstances, but the enthusiasm for the sale from both vendors and purchasers over the last two years has made it an easy decision to make it a permanent fixture.

"We are delighted to catalogue 360 lots that will appeal to a wide cross section of buyers, both domestic and further afield. The slightly reduced catalogue size also means that the sale will be able to take place on just one day, Wednesday, August 31."

'What more can you want' - Highfield Princess joy for John Fairley

FIRST PUBLISHED 12:27PM, AUG 8 2022
We are delighted to catalogue 360 lots that will appeal to a wide cross section of buyers, both domestic and further afield