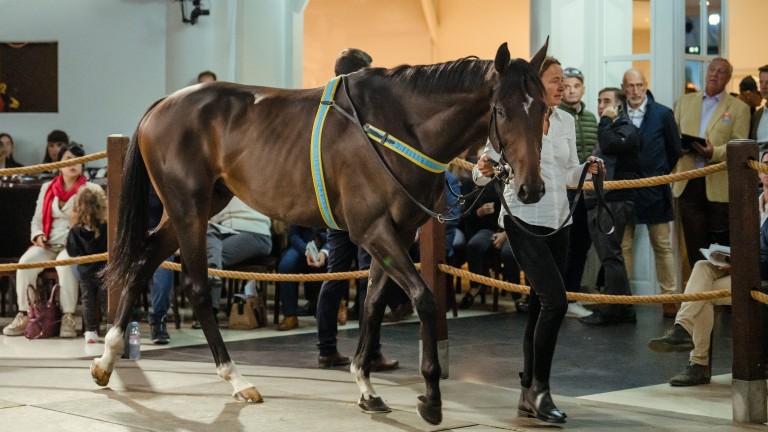 Schwarzer Peter arrived from Germany to top the Arqana Arc Sale
Arqana
1 of 1
By Bloodstock World Staff UPDATED 11:28AM, OCT 2 2022

This year's German Derby runner-up Schwarzer Peter captured the imagination of the Saint-Cloud crowd when reaching an impressive €1,000,000 at the Arqana Arc Sale on Saturday evening.

With trade overall considerably up on the 2021 event, he was one of a number of high-profile purchases by Jean Pierre de Gaste, whose International Thoroughbred Consultants is his commercial branch of Haras de Gouffern et de la Genevraye.

Although the son of Neatico has only a maiden win to his name, he has done very little wrong in a light career for Markus Klug and was beaten only a whisker by Sammarco in the German Classic. The trainer bought him for a mere €10,000 as a yearling at Baden-Baden.

Master Gatsby, an impressive winner of his latest start in the Group 3 Prix Gerald de Geoffre at Longchamp last month, was also bought bought for €480,000 by ITC, which was acting for a Saudi Arabian client.

New top price
Gr.1 runner-up SCHWARZER PETER (3yo by #Neatico), offered as lot 1 7 by Markus Klug at The Arc Sale, brought the hammer down at €1,000,000 in favor of @gouffern Jean-Pierre de Gasté for Haif Stable. pic.twitter.com/YYXMOm7XKD

The firm's total spend on five horses was €2,940,000 and, midway into the session, ITC threatened to get near the seven-figure mark again for another well-bred colt.

Rozgar, an Exceed And Excel three-year-old who had won the Listed Prix Marchand d'Or over six furlongs for Francis Graffard and the Aga Khan in the summer, was knocked down for €800,000

De Gaste said: "Sheikh Haif Mohammed Al Ghatani has a big stable in Saudi Arabia, with almost 70 horses. He owns the winner and the second of this year's Jockey Club Cup, during the Saudi Cup raceday. He also breeds and we bought mares at Keeneland in order to produce dirt horses.

"In the United States, the market of horses in training is too strong; we do prefer buying here, sound horses you can trust. His colours are well known with Purebred Arabians in France, including with the champion Kiss De Ghazal and her Group-winning sons Arion and Jarif. He breeds at Haras de Gouffern."

The other choice Aga Khan representative also reached a punchy price and it was agent Oliver St Lawrence who gained the day at €500,000 for Dilawar, a Group 3-winning son of Dubawi from the family of Daylami and Dalakhani. 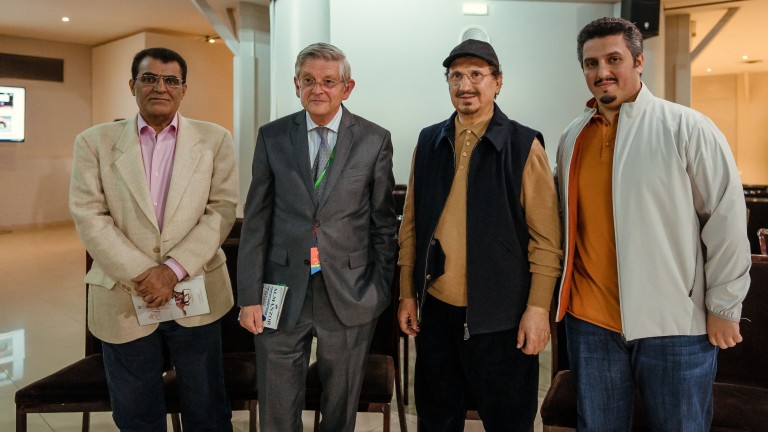 "He is going to be trained by Fawzi Nass for one of his clients," said the agent. "The goal is the Bahrain international festival. He is a lovely horse that enjoys fast tracks and we think he has the right to succeed there."

An attendant who had a busier day than anyone was Souzak, who had won the big sales race, the Haras de Bouquetot - Criterium Arqana midway during the afternoon at Longchamp and was still able to pop west across the Seine to make a personal appearance in the ring.

Not only had Nurlan Bizakov's Kodiac colt picked up more than £126,000 for his racing exploits, he added another €400,000 to the coffers when knocked down to the Mandore International agency.

Mandore's Nicolas de Watrigant said: "He's going to be trained by Graham Motion. I bought him for one of his clients. I am delighted to have been able to buy him and I hope he is going to succeed in America.

"It's a horse we were following for a while. And we were afraid that after his Saturday victory he would be out of reach!" 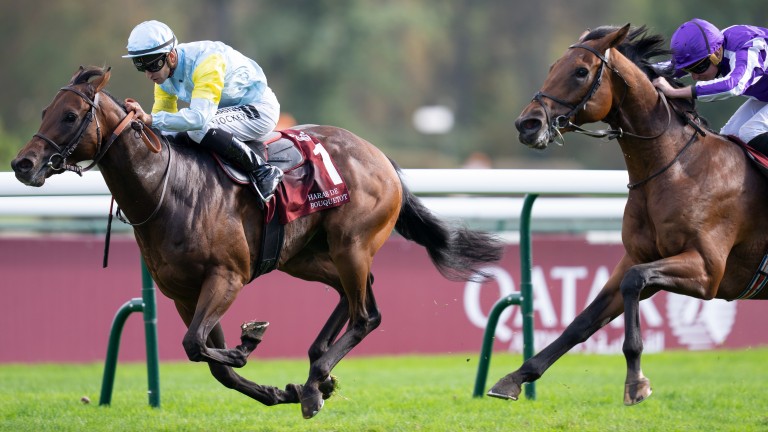 Rocchigiani, another familiar face as a German-trained winner of the Thoroughbred Stakes at Glorious Goodwood, reached €575,000 to telephone bidder Sam Wright, a regular international purchaser based in America.

David Menuisier, whose Ottilien ran a cracking third in the Prix de Royallieu before suffering the wretched loss of the promising Munch in the sales race, clinched the €160,000 signing of Toimy Son, a Listed winner over seven furlongs this year for Yann Barberot.

FIRST PUBLISHED 8:14PM, OCT 1 2022
In the United States, the market of horses in training is too strong; we do prefer buying here, sound horses you can trust