Yearlings by Kingman, No Nay Never and Kodiac in high demand at Book 2 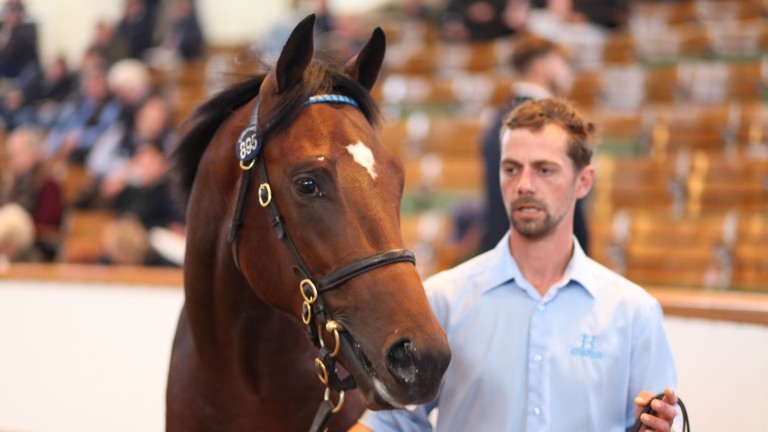 There was more fierce competition on day two of Book 2 of the Tattersalls October Yearling Sale in Newmarket on Tuesday, and proceedings reached boiling point shortly after 3pm when Hazelwood Bloodstock brought the Kingman colt out of Reem to the packed Park Paddocks ring.

Alex Elliott, positioned on the rope by the entrance, took an interest, and was soon joined by Anthony Stroud, who was stationed over his rival's shoulder against the back wall. However, as the half a million mark loomed large those early front-runners had to give way to a pair who know a thing or two about Kingman's prowess.

The Juddmonte Farms team of Simon Mockridge and Barry Mahon stood front and centre in the bidders' area, while John Gosden played his hand from a partly concealed position high on the back stairs to the right of the rostrum.

View full results from Book 2 of the October Yearling Sale

When Mockridge signalled a bid of 525,000gns Gosden cried enough and disappeared from view altogether as the gavel came down in Juddmonte's favour. The six-figure colt joins the three yearlings Juddmonte purchased during Book 1, a trio that cost a combined 1,230,000gns and was headed by the 800,000gns Dubawi filly out of Longina. 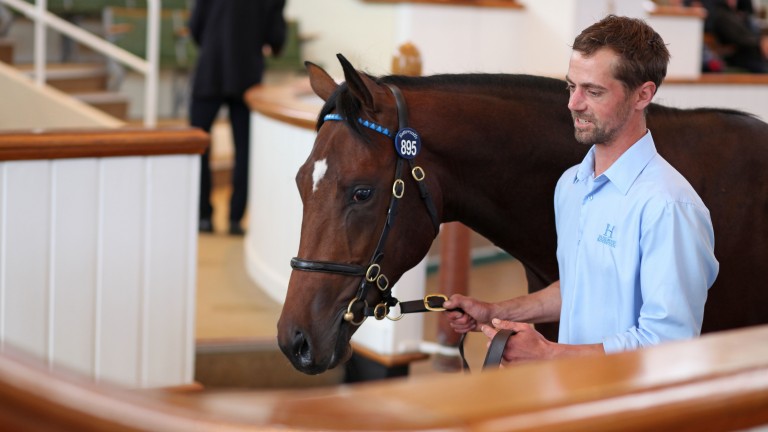 The Kingman colt was bred by Sheikh Mohammed bin Khalifa Al Maktoum under the Essafinaat banner and is out of Reem, an Australian-bred daughter of Galileo who won at Listed level at Meydan, where she also ran second in the Group 2 Balanchine.

This lineage makes the youngster a brother to the classy King Leonidas, who topped Book 2 in 2018 when sold to Sheikh Hamdan bin Mohammed Al Maktoum through Stroud Coleman Bloodstock at 750,000gns.

"Physically he's a very, very nice horse," said Mockridge. "He's got size, scope, a very big hip and he's a very good walker. Overall I think Adrian O'Brien and his team have done an excellent job. He could have been a Book 1 horse but they've brought him to Book 2 and he's a standout here." 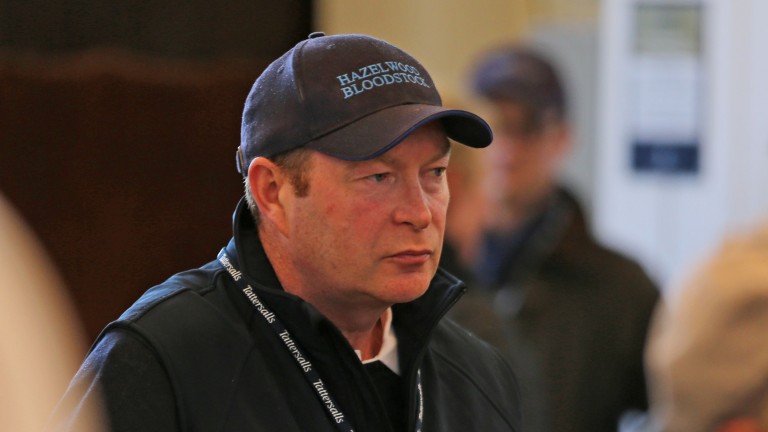 Adrian O'Brien: "I'm very flattered that Juddmonte have bought a horse of this quality from our farm"
Laura Green

O'Brien, who reported that Reem is in foal to Too Darn Hot, added: "What more is there to say other than, in a nutshell, we're delighted. The full-brother topped the sale three years ago and it's clearly a cross that works. I'm very flattered that Juddmonte have bought a horse of this quality from our farm, and I'm delighted for the breeder and for everyone involved."

Doyle finds a way for No Nay colt

A couple of hours later Ross Doyle won out with a bid of 450,000gns to secure the No Nay Never colt out of Seatone from Camas Park Stud. The colt was bred by Lynch Bages and Camas Park out of the Juddmonte-bred daughter of Mizzen Mast.

The dam's page has been significantly upgraded in recent weeks by her two-year-old Zoffany filly Prosperous Voyage, who has finished second to Inspiral in the May Hill Stakes and Fillies' Mile on her last two outings. 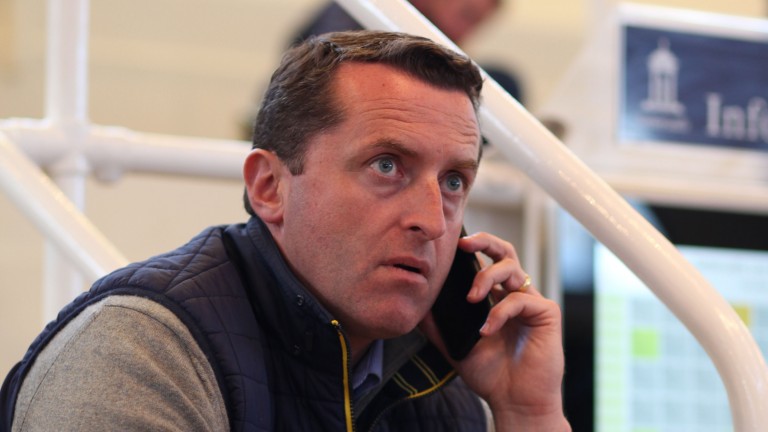 "He's a very nice horse by a top-class sire and comes from a very good home," said Doyle. "He's a very good mover and I thought he was a bit of a standout here today. I'm not 100 per cent sure who'll train him yet or where he'll go to be trained."

Stroud on the late shift for Asymmetric sibling

The session's third-highest price came just five lots from the end of the day when Anthony Stroud of Stroud Coleman Bloodstock saw off Dermot Farrington with bid of 350,000gns to secure the Gleneagles half-brother to Richmond Stakes scorer Asymmetric.

Bred and consigned by Jimmy Murphy's Redpender Stud, the colt is out of Swirral Edge, a dual winner by Hellvelyn. Asymmetric is the mare's first foal, and Murphy was in no doubt that the exploits of the Group 2-winning son of Showcasing, a 65,000gns yearling who fetched 150,000gns at the breeze-ups, was the reason behind Tuesday's six-figure transaction.

"Well thanks be to God!" said Murphy. "It's the two-year-old that's the reason for that. He's been marvellous all year, although this is a lovely horse himself. The mare is in foal to Mehmas."

Explaining how he got into the family, Murphy said: "John Ellis, a man who was friendly with PJ Foley, Joe Foley's father, used to race those horses [Wunders Dream and Firebolt under the third and fourth dams] years ago.

"I've followed the family ever since and this was the only way I could get in with a good line when I bought Swirral Edge off her trainer David Brown."

The participation of US interests proved pivotal in underpinning the market during Book 1 of the October Sale, and a handful of transatlantic talent searches were still ongoing deep into Book 2. Among those on the hunt was Ben McElroy, who went to 340,000gns to secure the Kodiac filly out of Shehila offered by Tally-Ho Stud.

McElroy has enjoyed some big results from his previous raids on Tattersalls, most notably finding Prix Morny and Commonwealth Cup heroine Campanelle at Book 1 in 2019. That Group 1-winning daughter of Kodiac was sourced on behalf of Barbara Banke's Stonestreet Stables, and the agent confirmed his purchase would also carry the same yellow and maroon silks. 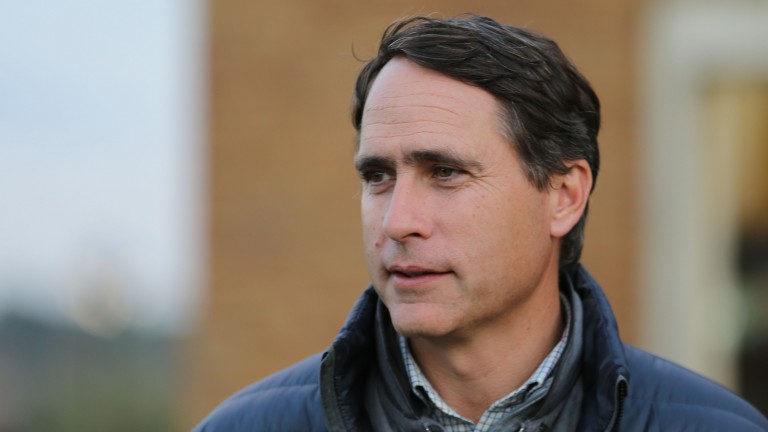 Ben McElroy: buyer of Campanelle was back in action
Laura Green

"I saw her two or three days ago and saw a lot of likeness with Campanelle," said McElroy. "She stands over a lot of ground, she looks quick, she has a lot of presence and exudes class, everything you want to see in a filly.

“Her siblings are all well related and obviously Kodiac is a top sire of fillies. We've already had a lot of luck with him so I hope that continues. She'll go back to America, most likely to Wesley Ward."

The filly, who was bred by Sandra Russell, is a sibling to three winners, including Ventura Diamond, a Listed-winning daughter of Dandy Man.

A new star for Zoustar

The March-born colt was bred by Michael O'Leary's Plantation Stud from the Exceed And Excel mare Rue Cambon, whose five black-type siblings include the Grade 1-winning Gorella and Group 2 scorer Royal Intervention.

The colt was pinhooked by Yeomanstown Stud at 110,000gns at last year's December Foal Sale, and the operation's David O'Callaghan said: "He's big and strong and I'm delighted that Demi O'Byrne has bought him as he loved him. I thought he was a very good foal out of an Exceed And Excel mare, so he had that speed influence to back him up and I was happy to take a chance last year."

Sebastien Desmontils of Chauvigny Global Equine and Jamie McCalmont clashed over the Sea The Moon half-brother to Listed scorer Romsdal, with the former party bringing the hammer down at 300,000gns.

The colt was consigned by Newsells Park Stud on behalf of William and Robert Barnett, the team who combined to sell the 1,500,000gns sales-topping Sea The Stars filly at Book 1 last week.

"He's going to France and will be trained by either Fabrice Chappet or Henri-Francois Devin," said Desmontils. "He's a very correct horse who vetted well, and he's by Sea The Moon, who's done really well and has very good stats. 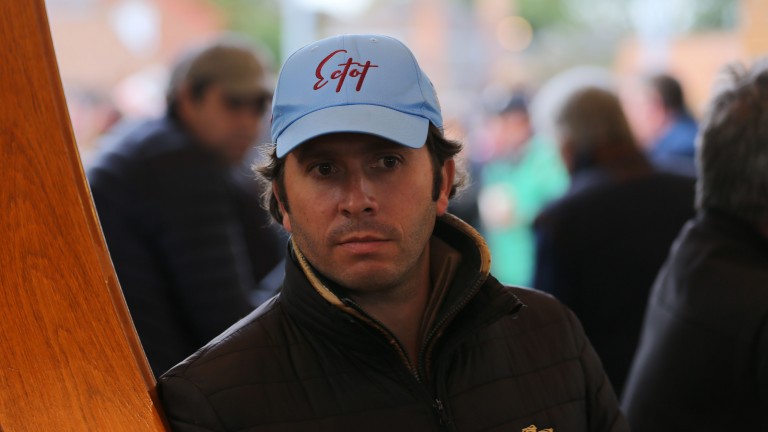 Sebastien Desmontils: "It's been very tough to get these horses and we've been outbid quite a few times"
Laura Green

"The dam is producing some very good horses too and it's great to get one of the lots my client had on his list. It's been very tough to get these horses and we've been outbid quite a few times, but the client really liked the horse and the pedigree so we're very pleased to get him."

The Sea The Moon colt is out of Pure Song, a daughter of Singspiel and Yorkshire and Irish Oaks heroine Pure Grain. The 16-year-old has produced five winners from seven runners, with Magnolia Stakes scorer Romsdal joined by the Listed-placed Pure Art.

Philipp Stauffenberg enjoyed a day to remember at the opening session of Book 1 when his No Nay Never filly topped the session at 825,000gns to the bid of Cheveley Park Stud, and a productive sale for the high-rolling German pinhooker continued on Tuesday when the Tokyo Thoroughbred Club gave 230,000gns for the Frankel filly out of Panmolle.

Stauffenberg bought the youngster, who hails from Juddmonte's Bahamian family, meaning the likes of Oasis Dream and Kingman feature back in the page, for 105,000gns at last year's December Foal Sale. The filly was bred by none other than Trevor Hemmings under the Wood Farm Stud banner.

"She's a nice filly and, although she might not be the most impressive Frankel, she has these big floppy ears and her working attitude is fantastic, so I think you'll hear from her again," said Stauffenberg. 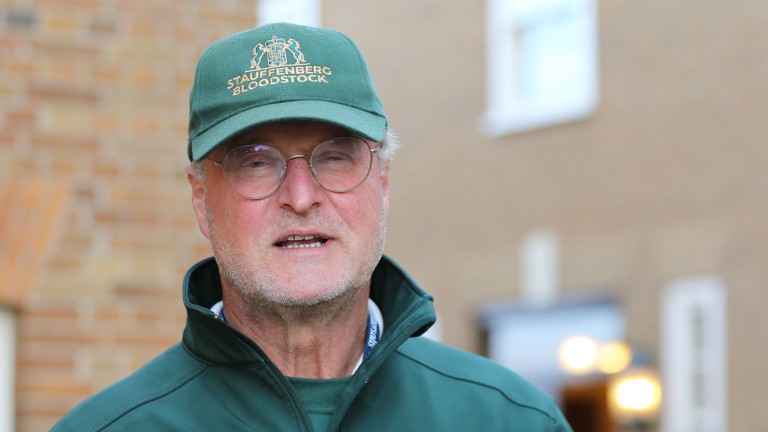 Philipp Stauffenberg: "Obviously when you sell a Frankel you're always thinking of big figures, but I'm happy with the result"
Laura Green

"Obviously when you sell a Frankel you're always thinking of big figures, but I'm happy with the result. Tattersalls wanted to have her in Book 1 but, personally, I thought she was better in Book 2 as she's not as big as some Frankels. I think it paid off."

Reflecting on a fruitful Tattersalls mission, Stauffenberg added: "I can't complain at all as we got all our horses sold well [at Book 1 last week] and the market seemed to be strong for the nice horses. Yesterday, as I understand it, was incredibly strong too so I think we're in good shape."

Simon Sweeting admitted that an unlikely turn of events had played its part in the latest big result for Overbury Stud, when the Gloucestershire farm sold the Showcasing colt out of Pacifica Highway to Anthony Stroud for 200,000gns.

The mare, an unraced daughter of Pulpit, has seen her offspring generate 515,000gns in Tattersalls receipts since she was acquired for $110,000 through Blandford Bloodstock at Keeneland in 2014.

Explaining how Pacifica Highway so nearly ended up in another breeder's broodmare band, Sweeting said: "We bought the mare carrying her first foal in the States and she's done fabulously for us.

"Richard Brown was over in Kentucky and we'd set a limit. I was listening to the live stream and she was knocked down to somebody else, so I closed my iPad and went to make a cup of tea.

"Ten minutes later Richard called back and Tom Goff had been following who she was knocked down to and they hadn't honoured the bid, so there was a bit of serendipity involved."

Pacifica Highway has since bred three winners, including the Grade 3-placed Ayacara and the two-year-old Lope De Vega filly Spanish Baroque, who has won two of her three outings for White Birch Farm and Jean-Claude Rouget.

Reflecting on the sale of the six-figure Showcasing colt, Sweeting added: "He's a homebred so that's a great result. The mare's foals have all sold really well and the two-year-old is a two-time winner and goes for a Listed race in November, so she's exciting.

"This colt has been fabulous all the way through the sale so I think he deserved that price. We wanted to put some substance into the mare, some of her earlier foals were a little light, so it was a toss up between Showcasing and Kingman that year.

"She has a filly by Night Of Thunder who's a super foal and we're very excited about her, and the mare is back in foal to Ardad."

Book 2 of the Tattersalls October Yearling Sale concludes on Wednesday with a session starting at 10am.

Dam of Newspaperofrecord to be offered at Tattersalls December Sale