Deep Field and Iffraaj colts make $310,000 to bring down curtain on record sale

Iffraaj colt was purchased on behalf of a Hong Kong client 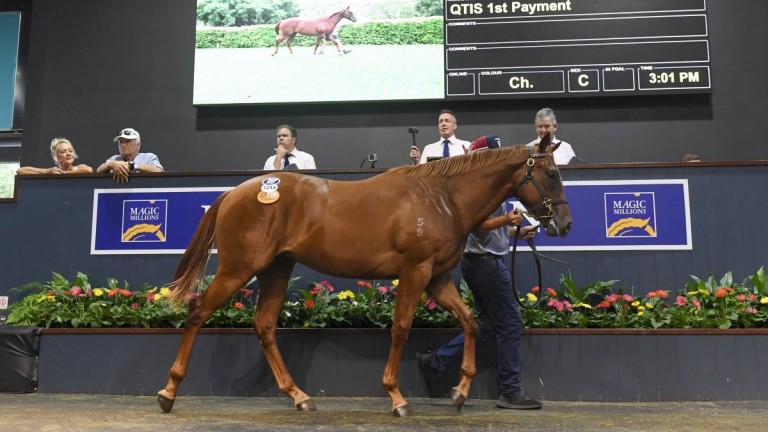 Yarramalong Park principal Richard Foster says the time was right to cash in on the success of exciting two-year-old Alpine Edge by selling his half-brother by Deep Field for $310,000, one of two colts to make the Book 2 top price at the Magic Millions Yearling Sale.

Bringing the marathon and record-breaking Gold Coast auction to a close, it was veteran local trainer John Morrisey who outlasted agent Denys Chan to buy the younger sibling to the Toby and Trent Edmonds-trained Alpine Edge, who was beaten a length and a quarter when finishing runner-up behind Shaquero in Saturday’s $2 million Magic Millions 2YO Classic.

“With this colt, we thought we better sell him and take some money off the table. He was always a very nice colt, right from birth, as they all are out of that particular mare.

“I'm so happy John Morrisey has got him as we’ve raced plenty of horses with Johnny over the years, off and on, and he's a great mate of ours and a great friend. We hope he has bought himself a champion.”

Catalogued as Lot 1244, he is the fourth foal out of the multiple stakes-performed mare Freezethemillions, who has produced two winners from three foals to race, including the Phelan Ready Stakes and B J McLachlan Stakes winner Alpine Edge.

Morrisey bought the colt on behalf of long-time client Gundaroo Stud, who have had horses with the trainer and his son Scott since he was training from Capricorn Park near Canberra in the 1990s.

"He's a different type of horse to his half-brother, but he’s a very nice horse,” said Morrisey.

"He's a little neat compact horse. The owner liked him more than me, but I thought he was a nice little horse.

“I feel he will make a two-year-old. We will try to see if he can be a horse that might make the race next year. We can only try.”

Foster, whose Yarramalong Park sold 14 yearlings across Books 1 and 2 for a total of $1,650,000, thought his Deep Field colt was well-placed in the second session.

“I didn't push [for Book 1], because at that stage Alpine Edge hadn't run in a race,” he said.

“We knew he was good but, at the end of the day, if Alpine Edge hadn't won those races, he might have got lost in Book 1.

“The fact he has been sold after the Magic Millions race has been run was no disadvantage.”

“We couldn't value him," he said. "You have to let the market value horses like this.

“I can’t sell them and buy them, I can only sell them. When they get up into that kind of money, you leave it to the buyers to sort it out.”

Iffraaj colts popular for the second year in a row

Earlier in the session Hong Kong agent Chan, who operates Golden River Investments, made sure he put a big exclamation mark on his three-month stint in Australia with a quickfire $310,000 acquisition of a New Zealand-bred son of Iffraaj.

It was Chan who landed the sizeable colt for a Hong Kong client after also signing for the $300,000 Scissor Kick filly sold on Sunday on behalf of All Winners Thoroughbreds.

Chan, who was Facetiming his client throughout the bidding process, held off the challenge of a rival who was sitting on the other side of the auditorium.

Chan said: “I like him a lot. He’s obviously a nice big horse who is a type. He is a good walker and he vetted all clean.

“He is for a Hong Kong client but he could race here in Australia before going back to Hong Kong on a PP (private purchase permit) or something like that.”

Iffraaj, whose shuttling duties to Haunui Farm in New Zealand ceased at the end of 2019, has now sired the top-priced Book 2 yearling for the past two years after Orbis Bloodstock went to $370,000 for another colt by the sire 12 months earlier.

The Darley stallion has sired 20 individual winners of 51 races in Hong Kong, including the stakes-placed Happy Era.

Offered by Bhima Thoroughbreds on behalf of Haunui Farm marketing manager Shannon Taylor, the colt received an important pre-sale pedigree update when his half-sister Cool Change ran third in a Listed race at Pukekohe. Catalogued as Lot 1186, he is the fourth living foal out of Busted Love, who herself is a half-sister to Singapore’s champion two-year-old of 2017, Be Bee.

Bjorn Baker or Greg Eurell, who will train the Capitalist half-sister to Hong Kong champion Golden Sixty who was sold in Book 1 and secured by Chan, are in line to train the Iffraaj colt.

Bhima’s Mike Fleming, who has sold horses for a number of New Zealand clients on the Gold Coast, believes this week’s results could be the catalyst for more Kiwi breeders to send stock to market in Australia.

He said: “He's a lovely horse, obviously a Classic horse, and he got a good update at the right time. He paraded well all week, showed himself off well and his sire is doing a great job. I couldn't be happier.

"He came over and was prepped here. She targeted him for the Book 2 sale, so [Haunui] can take all the credit, we just prepped him and put him through.”

The end of the Magic Millions sale also brought a conclusion to Chan’s extended stay in Australia after first quarantining in New Zealand last October.

“I came into Australia in late October, then I did the Hunter yearling inspections for this sale,” he said.

“The market has been very strong, but it’s been a good sale, though. The quality is just unbelievable. I think it’s been one of the best yearling sales in the southern hemisphere.

“I will fly back to Hong Kong on the 20th and then maybe I will be back in May/June for the National Yearling Sale.”

FIRST PUBLISHED 3:14PM, JAN 18 2021
With this colt, we thought we better sell him and take some money off the table