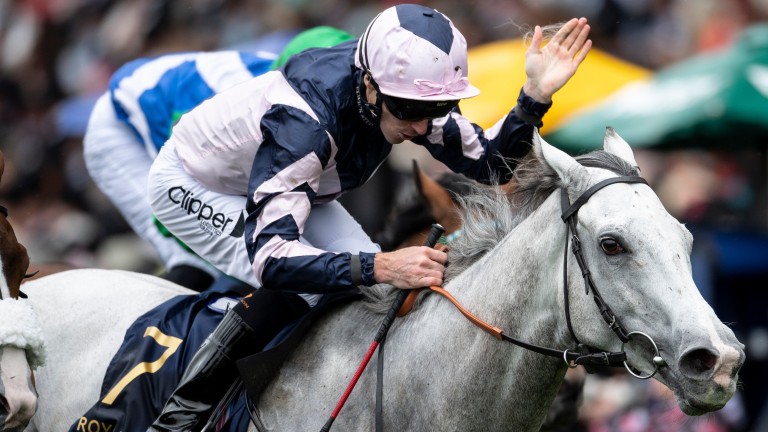 The catalogue for the Arqana Summer Sale, an auction that offers different categories of horses and takes place on Monday, July 20, is online now.

The sale has been the source of numerous Group/Graded winners on the the Flat and over jumps.

Sold by Christophe Lotoux to Jason Kelly and Elwick Stud, Lord Glitters won the Queen Anne Stakes last year. Over jumps Cepage won his first Graded race this year at Cheltenham, while Concertista then ran away with a Grade 2 mares’ novice hurdle at the same track a couple of months later. Both were offered as horses-in-training at the Summer Sale, and were bought by Guy Petit and Highflyer Bloodstock respectively.

The Breeding section gained a recent poster boy when Santiago won the Queen’s Vase at Royal Ascot and followed up in the Irish Derby. He was sold in utero when his dam Wadyhatta was offered in-foal to Authorized by Haras du Mézeray in July 2016 before being knocked down to Horse France.

This year’s sale brings together 252 horses. Proceedings will begin with 29 Flat-bred two-year-olds breezing on the Polytrack at Deauville from 11am on Sunday, July 19, before going through the ring the following morning.

They will be joined by 80 fillies and mares, and 142 horses-in-training. There are also 15 wildcard spots to be filled.

Poule d’Essai des Poulains winner Tin Horse (lot 1) will open the sale. Offered from the late Marquise de Moratalla’s estate, the stallion will be presented by The Channel Consignment.

Several of the mares are in foal to big-name stallions, such as Dabirsim, Kendargent, Great Pretender and Saint Des Saints.

The juveniles on offer include: lot 6, a son of Showcasing out of the excellent maternal line of Pharaoh's Delight, from Ecurie Prévost-Baratte; lot 10, a brother by Le Havre to Group 1 winner Shamalgan, from Haras du Saubouas; lot 22, a son of Siyouni from the rich black-type family of Trumbaka, Russian Blue and Emaraaty Ana; and lot 25, a daughter of Outstrip out of Group-placed Tiffany Diamond, from Hyde Park Stud.

FIRST PUBLISHED 12:28PM, JUN 27 2020
Several of the mares are in foal to big-name stallions, such as Dabirsim, Kendargent, Great Pretender and Saint Des Saints