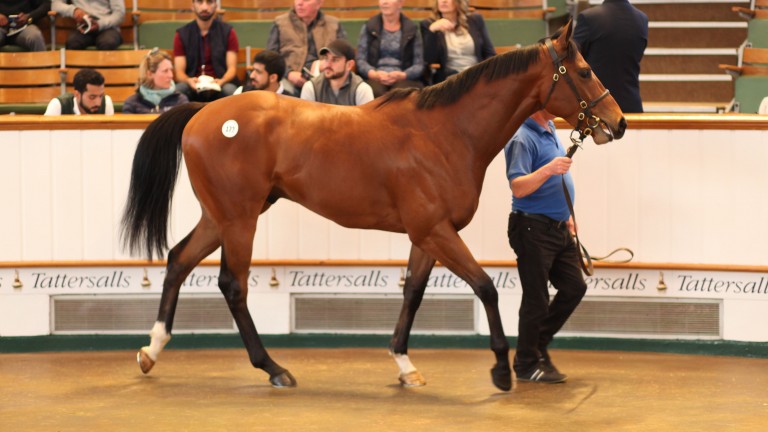 The peaks and the pitfalls of the breeze-up market were again in evidence during day two of the Tattersalls Craven Sale on Wednesday, with some eye-catching prices paired with a host of unsold lots.

For the second consecutive session, a son of Scat Daddy headed trade, as Stephen Hillen saw off John Gosden with a bid of 900,000gns to top the two-day auction. The colt, offered through Mayfield Stables, provided a hefty return on the $200,000 Hunter Valley Farm spent on the April foal at the now defunct Fasig-Tipton Turf Showcase Sale.

"I've seen the horse at Mayfield a couple of times," said Hillen, whose client had yet to decide on a trainer for his new acquisition. "He was a bit small to begin with but he really developed and the second time I saw him I loved him. I bought one Scat Daddy for sixty [thousand] and now this one, so I've seen both ends of the spectrum.

"He's a tremendous stallion, I think all the ones that breezed last year have won, although we'll be looking for a bit more from this one. I don't think you'll be waiting around too long with this one, he looks ready to go. This is the last sale you can buy from and still get them to Royal Ascot, so in theory you could see him there. You have to pay for the ones you want."

900,000gns from @StephenHillenBS makes lot 163 our new top lot and the second highest price ever at the Craven Breeze Up. The Scat Daddy colt was consigned by Mayfield Stables. pic.twitter.com/ZWH9VZGoMS

The colt is out of the Rahy mare Madera Dancer, who descends from the family of Linngari.

The evening's second-top lot was also supplied by Scat Daddy, with Jamie McCalmont partnering with Coolmore's MV Magnier at 775,0000gns to land the much-vaunted colt offered by Willie Browne's Mocklershill.

"This is the final crop of a stallion who has got just better and better," said McCalmont. "He's got two of the best three-year-olds in the world right now. He's a stallion that can do anything, he really is incredible."

The colt was bred by American Equistock and Drumkenny Farm out of an unraced half-sister to Grade 3 winner Brave Tin Soldier, while further back it is the family of Fusaichi Pegasus.

He went unsold at $240,000 at last year's Keeneland September Sale and was subsequently bought privately for $220,000.

Scat Daddy's final Craven Sale stats stand at six lots sold for a total of 3,150,000gns and an average of 525,000gns.Mocklershill, meanwhile, topped the consignors list by aggregate, with 13 lots sold for a combined 2,374,000gns.

The Godolphin buying team of Gosden, Anthony Stroud and David Loder enjoyed better fortunes earlier in the session when they landed a pair of noteworthy lots headed by a Sea The Stars colt out of the Group 3-winning Dark Angel mare Lily's Angel for 425,000gns

"He breezed very well for a horse that's probably going to stay well," said Stroud. "He moved well and did a quick time. Sea The Stars is a wonderful stallion too."

The colt, whose further family includes the likes of Es Que Love and We Are, was purchased by BBA Ireland for 230,000gns as a foal and was offered by Powerstown Stud.

Earlier in the session Godolphin representatives also snapped up a Dandy Man filly offered by Tally-Ho Stud for 280,000gns.

"She looks fast and ready to go on with. She comes from a good consignor and I think she'll be a nice filly going forward," said Stroud, who added that no decision had been made as to who would train Godolphin's latest purchases.

The filly was bought by Tally-Ho as a foal for €52,000 but failed to sell for €40,000 at last year's Goffs Orby Sale. She is the first produce of her unraced dam, a half-sister to Group 3 Prix Eclipse winner Perugina who hails from a Gerry Oldham family that is also responsible for Bocca Baciata, Topeka and Silvestro.

Alastair Donald was among the busier agents at Park Paddocks, and his list of purchases was headed by a 575,000gns Street Sense colt now destined for Hong Kong. Wedneday's third-top lot was offered by Jim McCartan's Gaybrook Lodge.

"We bought him privately for $55,000," said McCartan, who pinhooked the colt with Willie Browne. "He was a lovely, well-balanced colt, really athletic with a great colour and eye. And of course we had been so lucky with one by the sire before, we kind of went there looking for another one."

It was at last year's Arqana breeze-up that McCartan and Browne sold the unbeaten Walk In The Sun, another son of Street Sense who went from $15,000 pinhook to €1.4 million two-year-old when bought by Kerri Radcliffe on behalf of Phoenix Thoroughbreds.

"To be honest, I wasn't quite expecting that," he continued. "I obviously knew there was interest and he'd been out a fair few times, but I didn't expect him to make that so I'm delighted."

The colt, who went unsold at $70,000 at last year's Keeneland September Sale, is the first foal out of an unraced half-sister to Grade 2 winner Nonna Mela. He was bred by WinStar Farm.

Earlier in the session Donald outpointed Gosden at 420,000gns to land a Kodiac colt who was listed as sold at £260,000 as a yearling but reappeared in the draft of Church Farm and Horse Park Stud.

"He was returned as a yearling but made no noise when he breezed and his scope was very acceptable, and that's far more relevant now that he's been in training than it was as a yearling - hence all the people that were bidding."

The colt is the first foal out of a placed half-sister to the Group 3-placed Dandy Boy and from the further family of influential US sire Quiet American.

A short while later Donald dipped back into the Church Farm and Horse Park Stud draft to secure another Kodiac, a filly out the Listed-placed Dutch Art mare Graphic Guest, at 360,000gns.

"Richard Hannon will train both Kodiacs," said the agent. "She just looks very, very fast, the pedigree is all speed. She whizzed up the soft ground and you'd have thought she'd prefer better ground.

"The client is looking for a couple that he can get on with and hopefully they can both end up at Royal Ascot."

The Hong Kong Jockey Club's (HKJC) buying team were also back in action on Wednesday as the buying team went to 180,000gns for a son of Farhh offered by Tally-Ho Stud.

Despite a relatively limited number of runners, Farhh could be in for a big year with the likes of Wells Farhh Go and Dee Ex Bee to run for him, and the son of Pivotal clearly has a fan in the HKJC's Mark Richards.

"He's a well-balanced horse and the sire is doing a cracking job at the moment," he said. "There isn't any by Farhh in Hong Kong as we speak, but he's running at five per cent stakes winners to runners at the moment, so there's every chance we might get one before too long."

The colt was bred by Rabbah and is out of the unraced Catchline, a Bertolini half-sister to  top-flight winners Ancient World and Jilbab who has produced two winners from two runners.

On the day that Juddmonte announced the retirement of Banstead Manor Stud stalwart Dansili, the enduring appeal of the son of Danehill was felt at Park Paddocks as William Haggas parted with 150,000gns to secure one of his sons from the draft of Malcolm Bastard.

"He's a really nice horse and very well bred," said Haggas. "He breezed well and I know Malcolm very well and I know he loved him. I don't expect him to be early and I'm not sure who'll own him yet but we'll find someone."

The colt is the tenth foal out of Lady Lloyd-Webber's Fillies' Mile heroine Crystal Music, whose five winners include the Listed-placed trio Treasury Devil, Crystal Moment and Crystany. She is also the granddam of Prix Greffulhe winner Ocovango and Oh So Sharp Stakes runner-up Glitter Girl.

The Dansili colt is not the only Craven Sale graduate destined for Haggas's Somerville Lodge after Shadwell's Angus Gold went to 100,000gns to secure a striking grey son of Whitsbury Manor Stud's Showcasing.

"Sheikh Hamdan asked a couple of trainers to find a horse that they liked and William Haggas liked this one very much," said Gold.

"I don't think he's a wildly sharp horse despite being by Showcasing but he seemed to have a very good mind and has a bit of scope. We've got a good one by Showcasing in Tasleet - I saw him this morning, he looks great and could head for the Duke of York before going back to Ascot to see if we can get him to win a Group 1."

The colt was offered by The Bloodstock Connection having been pinhooked by Jeremy Brummitt for 75,000gns as a yearling, and descends from the family of another grey in Middle Park Stakes winner and Yeomanstown Stud sire Dark Angel.

Although the second session was not quite as tough going as day one, by the final hammerfall all key market indicators were showing significant year-on-year downturns, most notably the clearance rate, that fell from 79 per cent to 66 per cent, with 94 of 142 lots offered over the two sessions changing hands.

"The popular ones have been selling well but below that it's tough," said Horse Park Stud's John Cullinan. "There's very little depth to the market. I think people are worried about Brexit and then there's uncertainty in the markets. Trainers have no orders - it's been a nightmare."

"It's polarised, I've bought 13 and some of those were bought on spec because they were too cheap," said Stephen Hillen. "It's a buyer's market. It's almost easier for vendors to get 300 grand than it is to get 75."

Dansili retires: from an £8,000 opening fee to one of the most influential sires around

FIRST PUBLISHED 1:25AM, APR 23 2018
This is the last sale you can buy from and still get them to Royal Ascot, so in theory you could see him there