James Thomas reports from the opening session at Park Paddocks 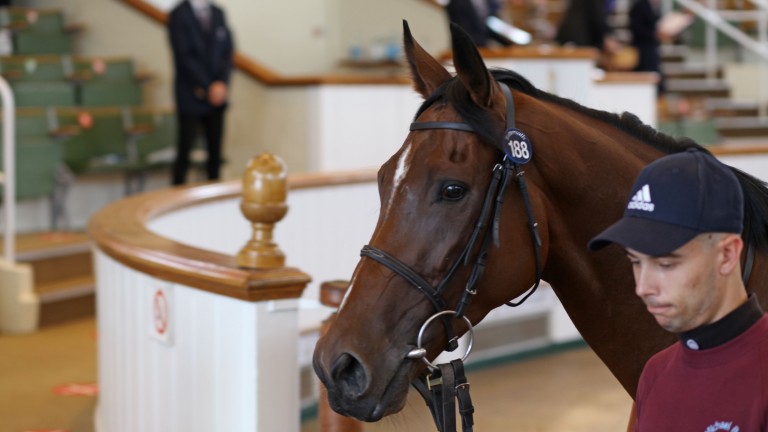 There was a look at the new normal at Tattersalls on Monday as Al Adiyat Racing landed the top lot during the opening session of the inaugural August Sale with a bid of 75,000gns struck online.

The Bahrain-based outfit went to the session-topping sum for Cloud Drift, a two-time winner by Toronado who was offered by Michael Bell's Fitzroy House on behalf of the Queen.

The top lot is set to race for Sheikh Isa Al Khalifa, who said: "[I'm] excited to have purchased the horse with the target of running in a valuable 0-100 mile handicap on Bahrain International Cup day, a day that also features the £500,000 Bahrain International, for which entries are now open."

The winning bidder may not have been at Park Paddocks, but Bell was in attendance and added: "I think, given the circumstances, it was a good price. He's a very attractive horse and I'm sure he'll do well for his new connections as he's still relatively lightly raced and a good mover." 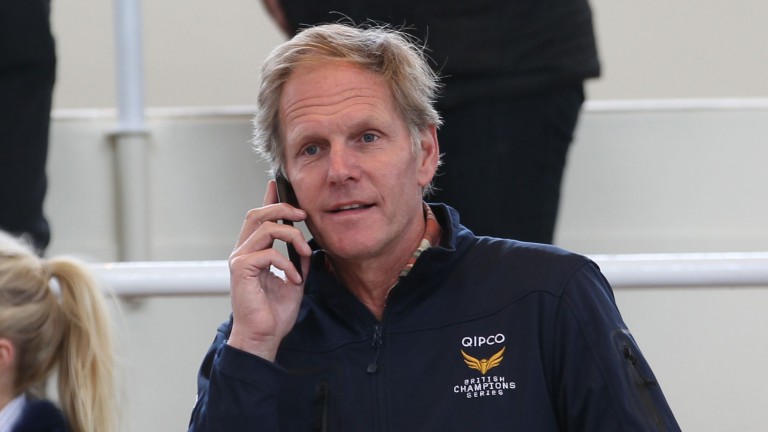 Michael Bell: "I think it's a very good time of year for a sale like this"
Laura Green

Cloud Drift won at two and added to his tally earlier this year when he landed a Leicester handicap in July. He changed hands with a peak Racing Post Rating (RPR) of 92.

Bell gave the August Sale his seal of approval, saying: "I think it's a very good time of year for a sale like this as it gives owners the chance to sell before the yearling sales and then if they want to go again, they know where they stand with finances.

"Equally it gives trainers a bit of extra time to run the horses compared to July, which comes around very quickly. I think it's something that needs to be considered for next year as well."

Soldierpoy led the market for much of the day after the progressive juvenile was knocked down to Will Douglass of Charlie Gordon-Watson Bloodstock for 67,000gns. The son of Sepoy, who was last seen finishing third in the Weatherbys Super Sprint for trainer Tom Clover, is now set to continue his career in Qatar.

"He's been bought by Injaaz Stud," said Douglass. "He was very well presented [by Barton Stud] and has rock-solid form. The trainer has done a very good job with him too so he stood out here. He's a strong, sound horse with a good bit of substance and looked a picture.

"We actually tried to buy him privately about a month ago. The Super Sprint always proves to be pretty good form and the race has been lucky for me in the past."

Douglass has found the Super Sprint to be a happy hunting ground for future talent before having purchased Hong Kong Group 1 winner Peniaphobia after the 2013 running. 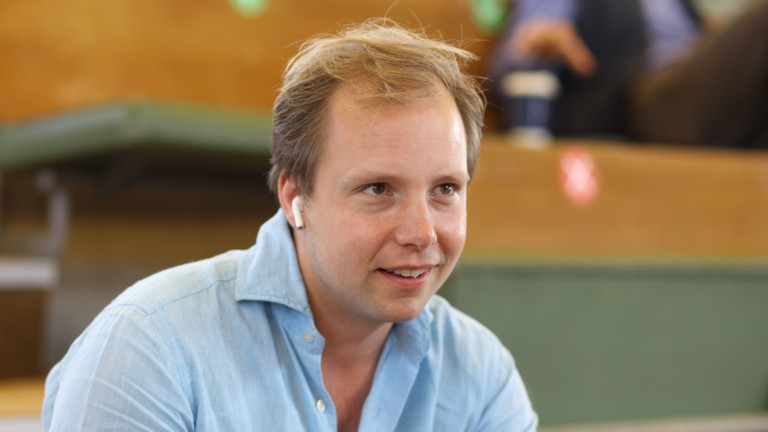 Will Douglass: "He's a strong, sound horse with a good bit of substance"
Laura Green
Soldierpoy provided connections with a handsome return on his second visit to the sales, having been picked up for just £7,000 at last year's Tattersalls Ascot Yearling Sale.

Clover said: "When we bought him with Billy Jackson-Stops last year people were a little cold on Sepoy but he walked very well, his half-brother had made 325,000gns and he came from a very good farm in Chasemore. He's always trained very well, won his maiden and then ran a great race in the Super Sprint.

"He sold very well and now we can go and buy a yearling for the owners so it's been good fun. There's a lot of friends and family in the syndicate who owned him, they watched him go through the ring and we've all been for a nice lunch in the Red Room so it's been great."

The catalogue also contained a number of breeding prospects and earlier in the session Mzyoon was knocked down to Peter Harper for 58,000gns when offered by The Castlebridge Consignment. The seven-year-old mare was sold with her Exceed And Excel colt foal.

"The horse has been bought for Sabah Al Sabah of the Kuwait royal family and she'll now head to Derek Iceton at Tara Stud in Ireland," explained Harper. "We're delighted with the price as I expected that we might have to pay more."

Myzoon did not make the track herself but made significant appeal on pedigree as a Galileo half-sister to Society Rock. Her first foal is the useful Zegalo and she also has a Kodiac colt yearling. 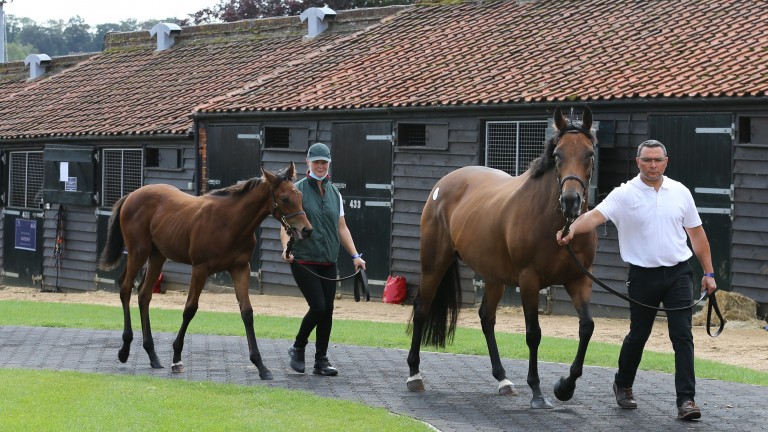 Mzyoon parades with her Exceed And Excel colt foal
Laura Green
When asked about the presence of Galileo in Myzoon's pedigree Harper said: "It's a big part of her appeal - it's very nice to get a daughter of Galileo for the broodmare band. She's a lovely mare too. The likelihood is that we'll sell the foal, but as a yearling rather than this year."

Harper went on to explain that Al Sabah has only started developing his breeding interests in recent years, but said the owner currently has eight mares and plans to add to that number.

Harper said: "He's very ambitious so we'll be expanding the breeding side of his interests. He absolutely loves his horses and he also has 40 warmblood horses in Holland."

Al Sabah currently has three horses in training with Roger Fell and one in Newmarket with George Scott. His colours were carried to success at Chester by The Flying Ginger earlier in the month.

Hide on the hunt

Plenty of the lots who changed hands are set to continue their racing careers on foreign shores, but among those staying closer to home is Sir Oliver who was knocked down to Tim Hide at 50,000gns.

The three-year-old son of Dark Angel is a brother to none other than Mecca's Angel. He won once for Richard Hughes, who gave 115,000gns for the gelding as a yearling, and changed hands with a peak RPR of 86.

"He's been bought for Dr Johnny Hon," said Hide. "We'll get him home and give him a bit of a break before getting him back in for an all-weather campaign.

"He looks like a fast horse and obviously he has a very fast sister. We think he should continue to progress with time so hopefully he'll make a nice four-year-old."

The Tattersalls August Sale continues on Tuesday at 10am.

FIRST PUBLISHED 7:05PM, AUG 24 2020
I think it's a very good time of year for a sale like this as it gives owners the chance to sell before the yearling sales