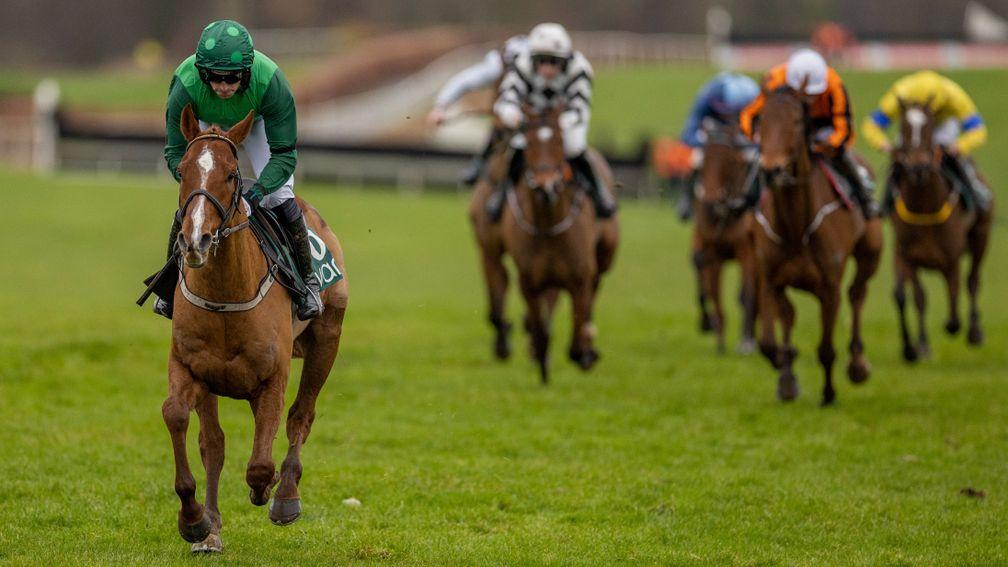 It's For Me: son of Jeu St Eloi shot to the top of the Champion Bumper marketCredit: Patrick McCann

In the time it took for Patrick Mullins and It's For Me to make a winning debut of consummate ease in the bumper at Navan on Saturday afternoon, the betting for Cheltenham's Champion Bumper was shaken up.

The winner is now a general 4-1 favourite to give his trainer, Willie Mullins, a baker's dozen of victories in the contest and has brought wider attention on his sire Jeu St Eloi, who stands at Haras de Cercy.

"He was very impressive but he doesn't particularly show that at home," the winning rider told Racing TV. "At home he doesn't show many gears but he is a different horse on grass and he bolted up in his point-to-point, so he's one of those who is better on grass.

"He quickened well and I gave him a little squeeze when we were clear and there was plenty left. He even half ran away with me when we were coming back to the parade ring."

Owned by Simon Munir and Isaac Souede, It's For Me has an unremarkable page with no black type winner under his first four dams. In fact it is necessary to go back to his fifth dam to find the Listed Prix Robert Hennessy Chase winner New Tatou, who is recorded as an Anglo Arabian.

Now a five-year-old, the chestnut gelding is the first winner out of his dam Ugoline, who was successful over jumps at four in France and is a daughter of Dom Alco, broodmare sire of Mullins' dual Gold Cup hero Al Boum Photo.
Jeu St Eloi is the sire of impressive Navan debut winner It's For MeCredit: Racing Post / Scott Burton
Bred by Laure Giethlen Cadiergues and Didier Giethlen, who is also a co-breeder of Jeu St Eloi, he was sold by Springhill Stud for €40,000 to Highflyer Bloodstock at the 2021 Goffs Land Rover Sale. He made a winning debut in a four-year-old maiden at Loughanmore last spring for Stuart Crawford before switching to Closutton.

Ugoline has a four-year-old Buck's Boum gelding who made £42,000 to Patrick Turley's Kingsfield Stables at the Goffs UK Spring Store Sale last May, where he was offered by Brown Island Stables. Her three-year-old is a son of Clovis Du Berlais.

His son, who retired to stud in 2016 and has stood at Haras de Cercy since 2019, is advertised at a career-high fee of €4,000 having sired the Grade 3 Prix de l'Avenir (AQPS) winner Idefixe Du Moulin and Auteuil Listed winners Hano De Loi and Hucello from his first two crops.

This was his first Irish winner, while he was also responsible for a Paul Nicholls bumper scorer in December, Inthewaterside.

Trained by Guillaume Macaire, Jeu St Eloi was placed in four of his six starts during his two seasons to race but his pedigree earned him a place at stud.

He is a half-brother to the Grade 1 Prix Maurice Gillois and Prix Ferdinand Dufaure winner Oculi, by Denham Red who is the sire of Mullins' stars Energumene and Un Des Sceaux. Jeu St Eloi is also a three-parts brother to Argentique, a Grade 3 winner who was placed in the Grade 1 Prix la Haye Jousselin.

His dam, Ottolina, is a Saint Cyrien half-sister to the dam of the Grade 2 Prix Georges de Talhouet-Roy winner Balko, who is the sire of Grade 1 Ryanair Chase winner and Grand National runner-up Balko Des Flos.