Son of Flemensfirth was the £380,000 sale-topper at Cheltenham in November 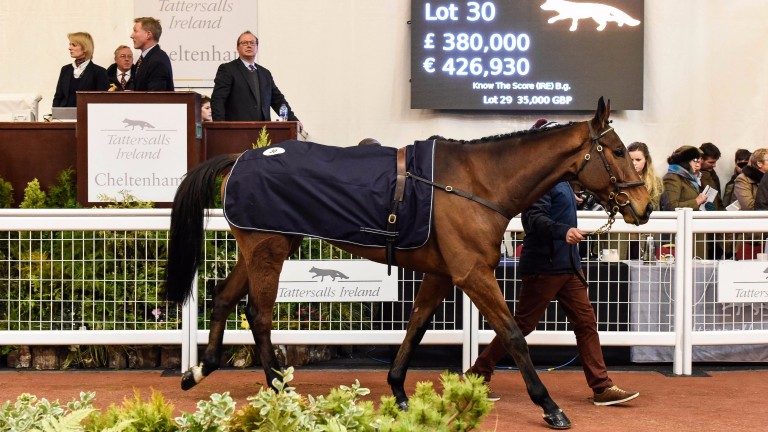 An authoritative win for Know The Score, the £380,000 Cheltenham November sale-topper last year, in the bumper at Towcester on Wednesday was described as a 'resounding success' by the Racing Post in-running comment.

The five-year-old had to be kept up to his work by Tom Scudamore on his first start under rules before surging clear up the Towcester hill for a comfortable 13-length success, with Milanstorm, bred on the same Milan-Glacial Storm cross as Mall Dini, Monalee and Mountainous, staying on into second.

Know The Score was bred by AJ Nevin and is a half-brother to Grade 2-winning chaser Cailin Annamh, out of lightly raced Sadler's Wells mare Prairie Bell, a half-sister to Grade 1 novice hurdle winner Pingshou.

The son of Flemensfirth dismissed his rivals by six lengths on his only previous start in a Ballinaboola maiden in November for handler Sean Doyle, before being acquired by David Pipe for £380,000 at the Tattersalls Ireland Cheltenham November Sale.

He now races in the colours of the Angove Family.

Know The Score's resale price represented a sharp increase on the €55,000 paid for him as a store by Monbeg Stables at the previous year's Tattersalls Ireland Derby Sale.

"Settled 2nd or 3rd, pushed along over 3f out, ridden to go 2nd over 2f out, led final 300yds and soon pushed clear for resounding success"

Could Samcro's former trainer be about to sell the third coming?

FIRST PUBLISHED 8:47PM, FEB 14 2018
The son of Flemensfirth dismissed his rivals by six lengths on his only previous start in a Ballinaboola maiden in November