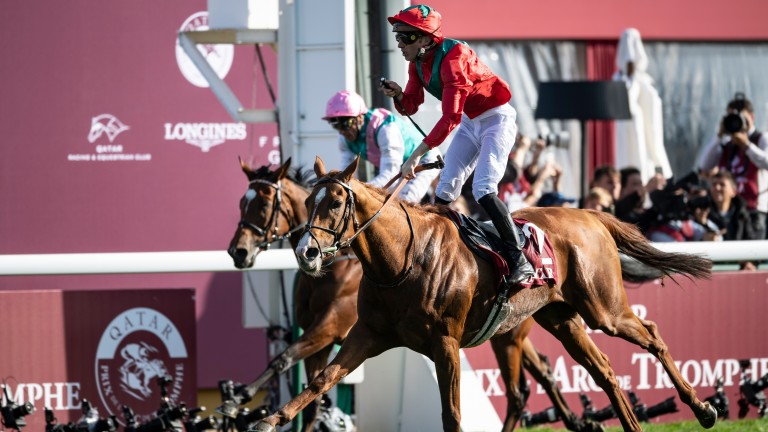 Ballylinch Stud has announced the arrival of Prix de l'Arc de Triomphe hero Waldgeist's first foal, a filly out of Not Misbegotten, a half-sister to Group 1 winner Nahoodh.

Ballylinch’s managing director John O’Connor added: “Ballylinch have a long and successful working relationship with Carrigbeg Stud and we are delighted that Stephanie has bred the first Waldgeist.

"The filly is from a family that we know very well here at Ballylinch, as we bred Not Misbegotten - who is a sister to Nahoodh.”

First foal for WALDGEIST arrives at Stephanie Von Schilcher’s Carrigbeg Stud
A filly foal out of Not Misbegotten, a half-sister to Group 1 winner Nahoodh. According to Steph she is "a beautiful strong filly, standing up and moving as if she’s already 2 weeks old.” pic.twitter.com/pFkxPaiFNn

Waldgeist, who was the highest rated son of Galileo to retire to stud since Frankel, covered 117 mares in his first book, including 63 stakes performers or producers.

The seven-year-old, who hails from the family of St Leger scorer Masked Marvel and German Derby scorer Waldpark, landed the Criterium de Saint-Cloud at two before finishing second in the Prix du Jockey Club at three and then adding the Prix de Saint-Cloud at four.

His finest hour came when catching Enable late on in the 2019 Arc, storming home to deny the brilliant mare a third successive win in the race.

Waldgeist, who was trained by Andre Fabre for Gestut Ammerland and Newsells Park Stud, will stand for a fee of €17,500 this year.

FIRST PUBLISHED 6:41PM, JAN 19 2021
The filly is from a family that we know very well here at Ballylinch, as we bred Not Misbegotten