Fasten your seatbelts: colt out of Danedream catalogued for Book 1 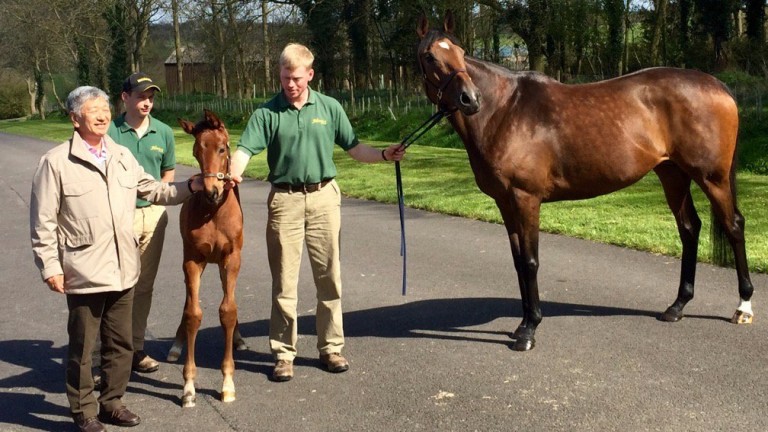 A Dubawi colt out of Prix de l'Arc de Triomphe heroine Danedream is set to raise the roof of the Tattersalls sales pavilion when he is offered at Book 1 of the October Yearling Sale in the autumn.

He will be the first foal or yearling out of a female winner of Europe's premier middle-distance contest to go under the hammer since My Typhoon – by Giant's Causeway out of Urban Sea – sold to Live Oak Stud for a record 1,800,000gns at Tattersalls in 2002, albeit that was after her exceptional dam had been represented on the track by Group 1 winners Galileo and Black Sam Bellamy.

The Book 1-bound colt holds overwhelming commercial appeal on both sides of his pedigree.

Dubawi has supplied 30 top-level winners, including Nezwaah, Sobetsu and Zarak this year, and at Book 1 last year he was responsible for the two 2,600,000gns joint top-sellers and his 15 lots sold for an extraordinary average price of around 970,000gns.

Danedream, meanwhile, marked herself down as one of the best racemares of recent times by recording an impressive five-length victory in the Arc at three before coming back at four to touch off Nathaniel to land the King George VI and Queen Elizabeth Stakes.

Her son will be consigned to Book 1 by Newsells Park Stud, which boards the Lomitas mare on behalf of owner Teruya Yoshida.

"The amount of people who have been to the stud and gone into his paddock to look at another horse, but have seen him and asked 'what on earth is that?' is astonishing. He just has that little bit of star quality."

Yoshida may be better known in Europe as a buyer of top-class athletes but his Shadai Farm is a major player in the commercial market for foals and yearlings in Japan, and at this month's JRHA Select Sale the farm's draft included a Deep Impact colt out of dual US Grade 1 winner Contested for around £1.4 million.

"Mr Yoshida and his team have always loved the Dubawi colt, and have come to the stud to see him, but he is commercial as well as a great owner-breeder," added Dollar. "They also have a Frankel two-year-old colt out of Danedream, and she is still a young mare and has young daughters on the ground, so it appears they are prepared to let the yearling have his chance in the ring."

The three-year-old filly Nothing But Dreams, Danedream's first foal by Frankel, was in training with Roger Varian but is currently at Newsells Park recuperating from a slight injury.

Danedream also has a filly foal by Frankel and is back in foal to the unbeaten dual world champion, from whom Yoshida bred this year's Japanese Oaks heroine Soul Stirring.

The prestigious Book 1 sale takes place this year over three days from October 3.

How other female Arc winners have fared at stud

Treve (2013, 2014)
Produced her first foal, a colt by Dubawi, in February and is safely back in foal to top-class two-year-old Shalaa.

Solemia (2012)
First foal, a Dansili colt named Solesili, is a two-year-old in training with Carlos Laffon-Parias. Also has a yearling filly by the same sire called Arcmania and a filly foal by Sea The Stars.

Zarkava (2008)
Has produced six foals of racing age but only one has raced – her four-year-old colt by Dubawi, Zarak, who landed the Group 1 Grand Prix de Saint-Cloud this month. Her two-year-old filly by Frankel, Zarkamiya, is in training with Alain de Royer-Dupre and she also has a yearling colt by Invincible Spirit, a filly foal by Siyouni and was covered by Dubawi this year.

Urban Sea (1993)
The best broodmare of all time? All of her nine runners gained black-type, including Derby winners Galileo, the perennial champion sire, and Sea The Stars, who emulated his dam's victory in the Arc and is a proven Classic source at stud. She also produced other top-level scorers Black Sam Bellamy and My Typhoon and Classic-placed All Too Beautiful and Melikah.

All Along (1983)
Did not replicate her brilliance at stud, with four winners from 11 runners headed by Prix Greffulhe winner Along All and Listed scorer Arnaqueur..

Akiyda (1982)
Responsible for only one foal who survived until adulthood: the unraced Akishka, who in turn produced three stakes winners including classy stayer Akbar.

Gold River (1981)
Poule d'Essai des Poulains runner-up Goldneyev and Prix Saint-Alary winner Riviere D'Or were the best of her runners. Riviere D'Or is the granddam of history-making racemare Goldikova, whose daughter Terrakova was a close third in the Prix de Diane last month.

Detroit (1980)
Produced five winners, all black-type performers and none better than Carnegie, who made it a mother-son double in the Arc when he struck at Longchamp 14 years later. The mare is also ancestress of Banimpire and Osaila.

Three Troikas (1979)
The best of her four winners was Prix Saint-Alary runner-up Three Angels and her family had been a little quiet until her great-grandson The Right Man struck in the Group 1 Al Quoz Sprint in March.