Bloodstock Latest A DAY TO REMEMBER 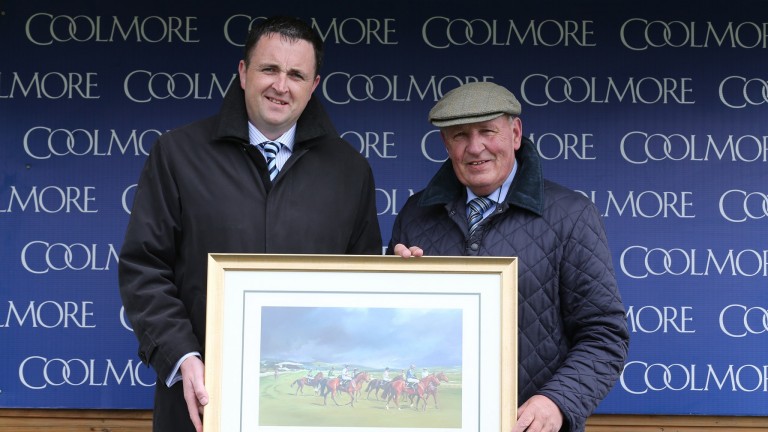 Gerry Aherne (left): the breeder of Romanised on trophy presenting duty for Coolmore
CAROLINE NORRIS
1 of 1
By James Thomas UPDATED 6:31PM, MAY 27 2018

Gerry Aherne was among the many left stunned after Romanised came with a storming late run to land the Tattersalls Irish 2,000 Guineas at the Curragh on Saturday. Not because of the colt's starting price or his less fashionable connections, but because he and his family were responsible for breeding the Classic hero.

The colt was bred under the name of Aherne's mother, Monica, and was raised by he and his brothers, Mikey and PJ, at the family's Prospect Stables in County Tipperary, where the family keep a five-strong broodmare band.

"It's incredible," says Aherne. "There's only one Irish 2,000 Guineas each year so to have a runner for a small farm like ours was fantastic. To actually go and win it, it hasn't really sunk in yet. It could be a long time before what we've done hits home.

"Our dad passed away ten years ago and he's the reason we're in this business. He used to train a few point-to-pointers and we've bred a lot of bad National Hunt horses. Obviously we're involved in the Flat now and this result is just fantastic."

It may have been family ties that led Aherne and his brothers to breed Romanised, but that is also the reason he was unable to attend the Curragh on Saturday.

"It's the first day I've missed him running!" he says. "We had a family function so I couldn't make it. We shouted him home anyway and it was still a special day and it's certainly something I'll never forget."

While many were left surprised by the outcome of Saturday's Classic, Aherne says there was quiet confidence in the camp, albeit if Romanised beating his better-fancied rivals seemed unlikely.

"It's easy to say after the event but Ken [Condon, trainer] always believed he was a high-class horse," he says. "He was a bit unlucky on his reappearance at Naas so we put a line through that and we genuinely thought he'd be in the first five. Although winning was probably stretching it a bit."

Romanised had to see off a trio of Coolmore-owned rivals in the Curragh Classic, which could make for an interesting Monday morning in the office for Aherne, who is a senior figure in the stud's nominations team.

Romanised powers clear of the Ballydoyle battalions in the Irish 2,000 Guineas
Alain Barr
He bred Romanised by sending Romantic Venture to Coolmore resident Holy Roman Emperor, a mating that made perfect sense on paper as the mare is an Indian Ridge half-sister to one of Holy Roman Emperor's leading performers, the four-time Hong Kong Group 1 winner Designs On Rome.

"His mother is a half-sister to Designs On Rome so it was a bit of a no-brainer to send her to Holy Roman Emperor and produce a three-parts brother or sister to him," he says. "The mare tended to get very big stock and Holy Roman Emperor is a more compact type of horse so physically the mating suited very well."

With a pedigree with such international appeal it is not surprising that Hong Kong-based owner Robert Ng took a keen interest in the colt. But such was his determination to secure the close relation to Designs On Rome he began making enquiries before Romanised had even been born.

"I sold Romanised privately to John McCormack," Aherne explains. "I'd spoken to him about the breeding when the mare was pregnant, and Robert Ng's love is Hong Kong racing so he wanted to try and win the Hong Kong Derby.

"We sold him as a foal when he was only one week old. It's very unusual for a deal to go through that early. We then raised him ourselves until he was into the October of being a yearling and thankfully the owner has left the horse with Ken since."

Sadly, Romantic Venture died during foaling last year, but the family line looks set to continue further through her two-year-old daughter Roman Venture, a sister to Saturday's Classic hero who Aherne has placed in the care of Ger Lyons.

"We have the sister and Ger thinks she's nice, and she'll run in about a month with a bit of luck," he says. "Whether we sell her or breed from her, time will tell."

FIRST PUBLISHED 6:22PM, MAY 27 2018
To actually go and win it, it hasn't really sunk in yet. It could be a long time before what we've done hits home