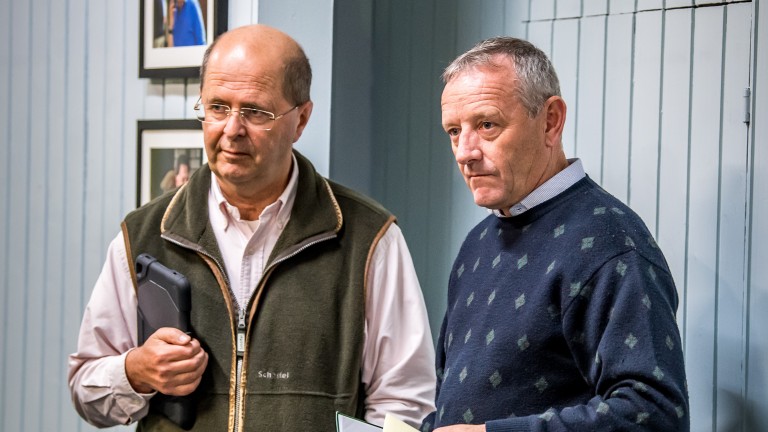 Grant Pritchard-Gordon (left): ""We want to see very many more bonus winners, with lucky owners shouting from the rooftops."
Sarah Farnsworth/Goffs
1 of 1
By Kitty Trice 10:46AM, FEB 26 2021

The Great British Bonus's final registration deadline for two-year-old fillies arrives on Sunday and, with numbers up on the 2018 crop, a landmark figure of £2 million paid out in prizes is likely to be reached within a year of the scheme's launch.

With racing cancelled last spring due to coronavirus, the scheme was pushed back to late May ahead of racing's resumption but bonus wins quickly followed for eligible British-bred fillies and mares on the Flat and over jumps.

Since the scheme's first winner Pelekai struck at Newcastle on June 2, over 110 winners have been rewarded with £1.7m in bonuses including multiple winners Blackberry on the Flat and Jane Seymour Mares' Novices' Hurdle winner Anythingforlove.

Manager Grant Pritchard-Gordon explained: "The numbers are actually considerably up on the 2018 crop. Until the final figures are produced on Monday, I cannot give an exact number, but there will be 25 per cent more fillies running for GBB bonuses.

"The number of opportunities has much increased, with these 2019 fillies able to win bonuses in auction and median auction races, as well as the programme for three-year-olds."

Pritchard-Gordon is also looking to the future with the scheme, with confidence high of building on the scheme's bonus distribution.

He added: "We want to see very many more bonus winners, with lucky owners shouting from the rooftops when their fillies win multiple bonuses!

"In terms of milestones, we want to substantially build on our record of bonus distribution. With an expanded race programme, there is a reasonable expectation to sail past the likely £2m distributed in the scheme's first 12 months.

"We want to build again on the scheme's influence in the sales ring and persuade as many breeders as possible to join us on this road to survival."

FIRST PUBLISHED 10:46AM, FEB 26 2021
The number of opportunities has much increased, with these 2019 fillies able to win bonuses in auction and median auction races