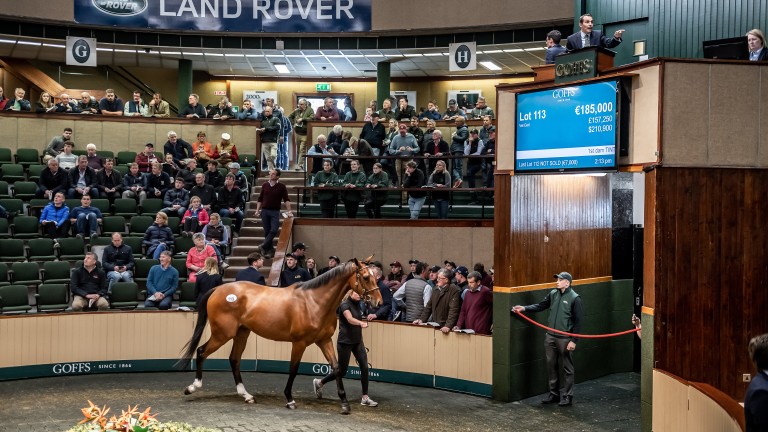 Trade was robust from start to finish during day one of the Goffs Land Rover Sale on Tuesday, and after a diverse buying bench had spent the session crowded around the Kildare Paddocks sales ring all key market metrics were showing year-on-year gains.

Those results were achieved despite the session being unable to supply the theatrics of 12 months ago, when a €325,000 son of Flemensfirth topped the bill, but the sheer strength of trade more than made up for the absence of a show-stopper.

Prices were led by the Yeats sibling to Tombstone and Tintangle who went the way of Cheltenham Festival-winning trainer Martin Brassil for €185,000. Despite his high-achieving siblings, Brassil said it was a likeness to a horse already in his care that ensured the Rathmore Stud-consigned gelding caught his imagination.

"I loved him from the first time I saw him yesterday morning, I was really taken with him so went back to see him a few times and he didn't disappoint any time," said Brassil. "He showed himself even better when he got up to the parade ring, he was always inquisitive and going forward.

"He's a full-brother to Tintangle, and if he could do what she - or any of his other siblings - have done he'd be well worth the money. Yeats is producing a nice, big, chasing type of horse now. He reminded me a lot of Longhouse Poet, a Yeats horse who we won a bumper with at Punchestown."

The son of Yeats is out of the Un Desperado mare Connaught Hall, a sister to the dam of Ballyoptic.

Some 20 lots later Gerry Griffin, sat with Nicky Richards to the left of the rostrum, and Aiden Murphy, stood to the right, locked horns over Tfou, a son of Authorized offered by Hugh Bleahen's Clifton Farm. After a protracted back and forth the former camp emerged victorious with a bid of €180,000.

"We loved him from the minute we saw him," said Griffin. "The only thing that's wrong with him is he's too dear! If you're trying to find something to go to Cheltenham with you've got to pay for it though - you don't get cheap stuff in Harrods! He'll go to Nicky Richards." 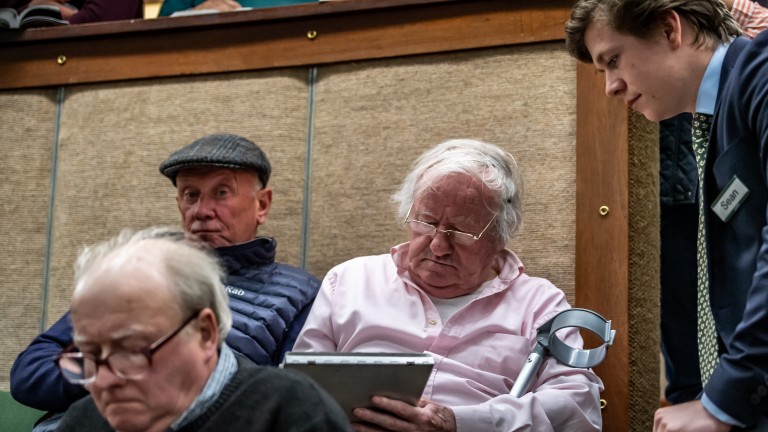 Gerry Griffin signs the docket for lot 133
Sarah Farnsworth
The half-brother to the Listed-winning hurdler Fraulein Agatha showed a healthy return on his pinhook price, having been picked up by Bleahen as a yearling at the Osarus National Hunt Sale at Maisons-Laffitte for €20,000.

"I thought he was gorgeous the minute I saw him but he was very big as a yearling," said Bleahen. "He's furnished out into a beautiful horse now, though. We sold the sale-topper here four years ago and that horse turned out to be Hardline, who won a Grade 1 last season, and I thought this horse was very similar to him.

"You're never confident that they're going to make that sort of price but I knew he was a big-time horse. I'm a director here at Goffs so I like to support the Land Rover with my best stock."

Young gun in the spotlight

There was a notable result for first-crop sire Valirann, as Tom Malone and Paul Nicholls combined at €155,000 to secure one of his sons from the draft of Kieran Lennon's Springhill Stud.

The three-year-old is out of the Grade B handicap hurdle winner Brogella, who has produced three winners, including the Lartigue Hurdle winner Swamp Fox and the Listed winner and Grade 1-placed Rene's Girl.

While Valirann may still be something of an unknown quantity, Malone said a familiarity with the rest of the pedigree underpinned his confidence.

"I love the pedigree," said Malone. "I bought his brother, Alrightjack, here as a store for €50,000. Obviously this horse is by Valirann, who's still a young sire, but the dam has proven she can produce a black-type horse by Windsor Knot, so the pedigree speaks for itself.

"He's a lovely animal with loads of scope and size and he's been bought to go to Paul Nicholls." 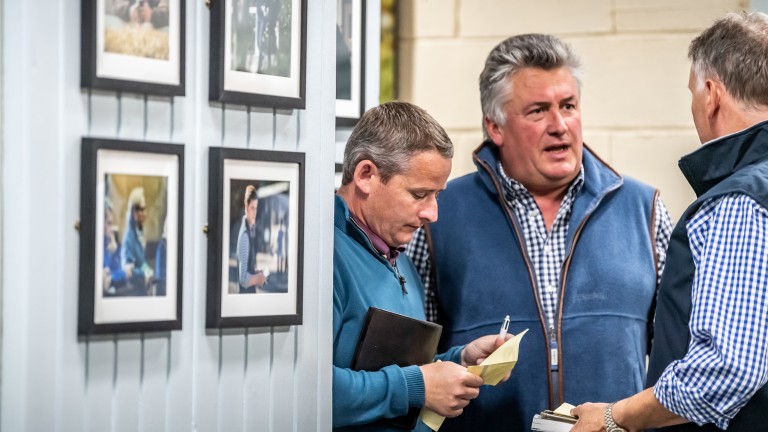 Tom Malone and Paul Nicholls make another acquisition
Sarah Farnsworth
As well as thrusting Valirann into the spotlight, Malone's purchase also provided Lennon with a handsome bit of pinhooking profit, having bought the gelding for €20,000 from Ronnie O'Neill's Whytemount Stud, the farm at which Valirann stands at a fee of €1,500.

"Not at all," was Lennon's response when asked if he had expected such a big result. "He was reserved at about €40,000 and I came here thinking he might make about that, but after the amount of interest in him I felt there was a chance he might make more. There was plenty of live customers.

"I thought the sire mightn't allow him to make that price but people were very happy with the horse, and obviously the mare is a very good producer, she's bred them by every sire," Lennon added. "It's great for Valirann, a first-season sire, to get such a price at the Land Rover and to have a horse going into training with such a great trainer.

"I have a lovely Valirann filly from the family of Annie Power for next year, she's a smasher."

Malone and Nicholls were in determined mood throughout the session, having also landed a son of Milan from Ballyreddin Stud for €150,000 as well as a Fame And Glory gelding for €175,000 late in the day.

Bowe back for more

Fresh from being crowned champion point-to-point handler, Milestone Stables' Colin Bowe was restocking for the upcoming season, and topping his list of recruits was a well-bred son of Flemensfirth who fetched €155,000.

"A few lads have come together to form a new syndicate and he'll be going point-to-pointing for them," said Bowe. "He has a bit of size and scope and a good pedigree. I've been lucky with Flemensfirth's progeny in the past too."

The gelding, consigned by Ballincurrig House Stud, comes from a family that has enjoyed plenty of success in the Goffs ring, as he is closely related to last year's €325,000 Land Rover top lot. The youngster is the first foal out of Hotline, a Poliglote half-sister to Master Minded and full-sister to Keep Face, the dam of last year's most expensive store.

French-breds made up a significant percentage of the day one entries, with 64 of the 278 catalogued lots (23 per cent) bearing the FR suffix. They duly found favour in the ring, with four French-bred lots featuring among the session's top ten.

The €180,000 Tfou bought by Gerry Griffin and Nicky Richards led the way for the French brigade, followed by Lac De Constance, a son of Martaline bought by Matt Coleman of Stroud Coleman Bloodstock for €135,000 when offered by Moanmore Stables.

"He came well recommended by Peter Vaughan [of Moanmore Stables] and I thought he was a sensational mover," said Coleman. "He's by a proven sire and the dam is a half-sister to a Group 1 performer so he's got a great pedigree too."

The three-year-old is out of the Kendor mare Kendova, a half-sister to the Group 2-winning and Group 1-placed Siljan's Saga.

In his close of session statement, Goffs group chief executive Henry Beeby said: "Extraordinary. That was the way we summed up this day 12 months ago when the Land Rover record was broken on three occasions headed by an amazing high of €325,000.

"Against that background, never mind the ongoing political uncertainties and several other factors, it was always going to be a stretch to get close to the 2018 record breaking stats especially when this year’s top price would only have come in at number six at Land Rover 2018.

"So for the average to have held steady at €48,386 and to have returned a median price that has risen by 18 per cent to a staggering €45,000 is an incredible achievement and points to a sale of extraordinary depth, quality and consistency, the like of which is simply unprecedented at any sale.

"This amazing figure flows from a massive clearance rate of 91 per cent whilst the number of six figure transactions grew again and those realising €50,000 or over advanced by 30 to a stunning 103.

"These results are only possible with the help of several groups. The vendors trusted us with a catalogue of unparalleled quality that appealed to the biggest group of buyers ever to have descended on Kildare Paddocks for a National Hunt sale so we thank both sides of the auction equation most sincerely and then salute the superb graduates of previous Land Rover Sales that included ten individual Grade 1 winners in the past season so cementing the sale's reputation for market leading success."

Land Rover Sale through a lens: Patrick McCann with the action from Goffs

Henry Beeby gives us the lowdown on the Goffs London Sale

FIRST PUBLISHED 9:39PM, JUN 11 2019
The only thing that's wrong with him is he's too dear! If you're trying to find something to go to Cheltenham with you've got to pay for it though