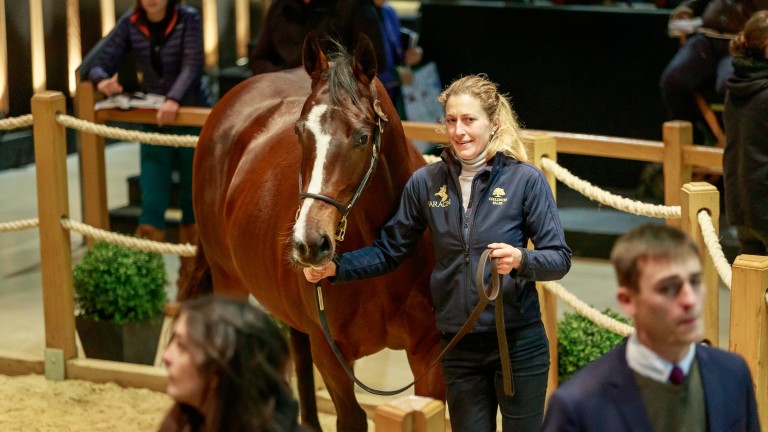 Strong trade continued at the Arqana Breeding Stock Sale in Deauville on Sunday as breeders and bloodstock speculators showed a seemingly insatiable appetite for promising producers and pinhooking prospects.

Christian Black of Blackstone Farm in Pennsylvania was among those sampling the delights of Arqana's panoramic restaurant that overlooks the ring, but the American was there for more than just a long lunch, as he secured Citation One with a bid of €200,000 delivered from the dining room.

The three-year-old daughter of Oasis Dream hails from a solid German family, as she is a half-sister to the Group 3-winning Calyxa and the Group 3-placed Clear For Take Off. That trio are out of the Listed-winning Lando mare Chantra. 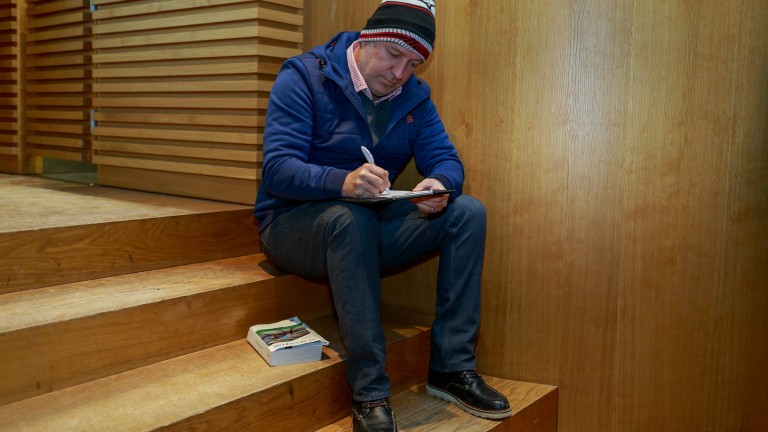 Christian Black: "She'll go to America for our partnership at Blackstone Farm"
Zuzanna Lupa
The unraced Citation One, who was offered by Coulonces Sales in foal to Mastercraftsman, looks set to continue her breeding career on the other side of the Atlantic, where an eye-catching mating is in the offing.

"She'll go to America for our partnership at Blackstone Farm," said Black, who operates with Douglas Black and Mark Weissman. "We'll see what happens when we get there but we'll probably breed her to Justify.

"She's a beautiful mare and you get so much soundness with that German family. We're very happy to have her and we're hoping she produces a nice Mastercraftsman foal. We bought one yesterday too, Grey Anatomy [for €180,000], but she'll stay here in France."

With around 50 lots to sell, the session's priciest pinhook had been knocked down to Philipp Stauffenberg, who made the winning play of €190,000 for a Wootton Bassett filly while hidden away down the corridor to the right of the rostrum.

Consigned by La Motteraye Consignment, the filly is out of Green Diamond Lady, making her a half-sister to the Listed-winning two-year-old Lady Galore, while her second dam is Spain, winner of the Breeders' Cup Distaff in 2000.

"She's a lovely quality filly, she's a great mover and just has something about her," said Stauffenberg. "It's a good page, the two-year-old is a stakes winner and the next dam is a Breeders' Cup winner, so it's a deep family." 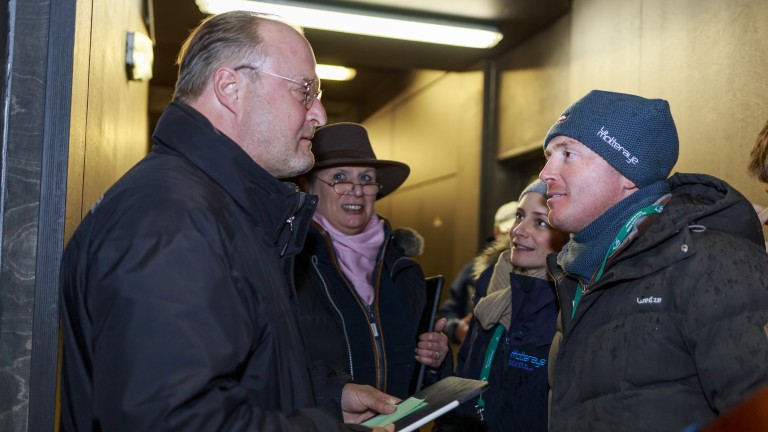 Philipp Stauffenberg (left) after signing for the €190,000 Wootton Bassett filly
Zuzanna Lupa
The latest round of sales have seen a surge in support for Haras d'Etreham's Wootton Bassett, whose current crop of foals were conceived at a fee of €20,000. Stauffenberg is firmly among the stallion's fans, having also bought one of his sons for €130,000 during the Goffs November Foal Sale.

He said: "As Wootton Bassett is now getting his better-bred foals, you would expect him to step up. We bought a very nice colt by him in Ireland too so we have put a lot of faith into the stallion."

Having also been active at Goffs and Tattersalls, the German pinhooker gave his appraisal of trade across the three major European breeding stock auctions, saying: "Overall the market has been very strong. There were not so many nice foals, but you had to spend a little to get the ones that were there."

Jeremy Brummitt was prepared to take a slice of humble pie after he purchased Vadariya for €180,000, as the bloodstock agent shared his regret at not having secured the winning daughter of Sea The Stars at an earlier opportunity.

Bred and raced by the Aga Khan, the half-sister to Poule d'Essai des Pouliches runner-up Veda first changed hands when sold to Broadhurst Agency for €210,000 at the 2015 Arqana Breeding Stock Sale.

She has since produced three foals, and the first of those got her off the mark at paddocks when the Le Havre filly Waliyak scorer by three and a quarter lengths at Wolverhampton late in November. 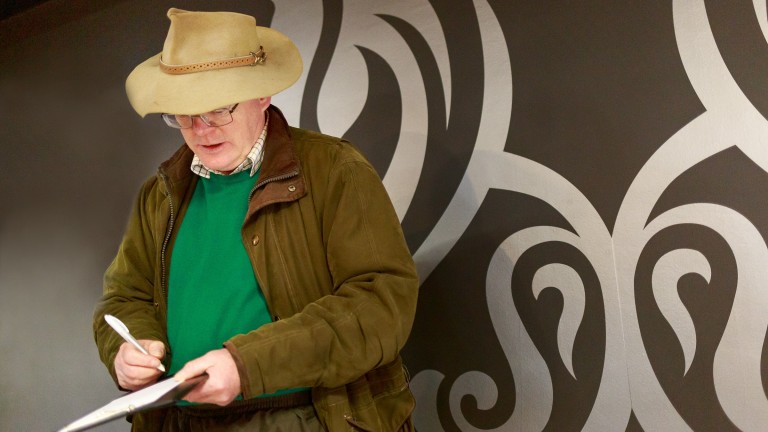 Brummitt, who had been standing with Bjorn Nielsen before the hammer came down, also revealed he had come off second best when Waliyak was sold to Fawzi Nass through Oliver St Lawrence at €240,000 at last year's Arqana August Sale.

He said: "We're going to go back to Le Havre with her as we were underbidders on the yearling. She's been bought for an undisclosed client."

"It's on the page!" was Michel Zerolo's response when asked what had appealed about Motivation, who the agent secured with a bid of €160,000.

The ten-year-old daughter of Muhtathir, offered in foal to Wootton Bassett, is the dam of Rockemperor, who ran a staying-on third in the Grade 1 Belmont Derby having switched from Simone Brogi to Chad Brown earlier in the year.

"I think Chad really likes Rockemperor, he could be a Grade 1 winner soon," said Zerolo. "She's a young mare and is in foal to a very sexy stallion from a great family. As I said, it's on the page! I haven't thought about what I'm going to do with her next but I'm going to work on that." 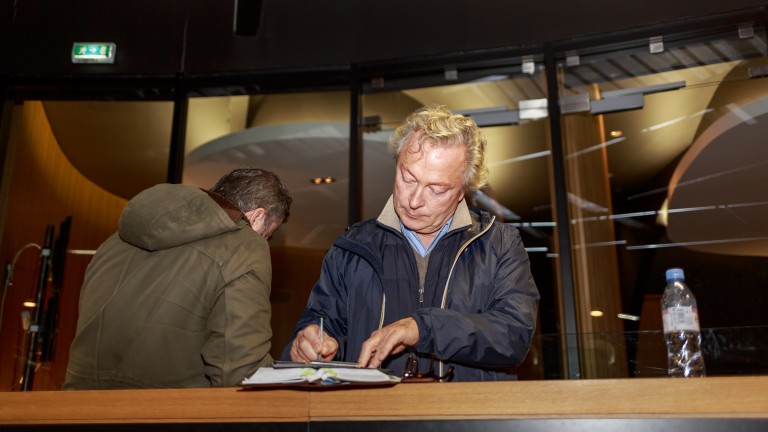 Michel Zerolo: "It's on the page!"
Zuzanna Lupa
Some illustrious names appear further back in Motivation's pedigree, including the likes of Peeping Fawn, Thewayyouare and Cityscape.

Zerolo was busy throughout the opening two days of the Deauville auction, having bought the €1.25 million Unaided and the €520,000 Eliade on behalf of White Birch Farm on Saturday. However, he revealed Motivation had been purchased to bolster his own broodmare band.

Prominent French pinhookers were quick out of the blocks at Sunday's session, and their efforts were rewarded with some notable acquisitions. Hubert Guy was the first to strike, having gone to €140,000 for the Wootton Bassett filly out of the Nathaniel mare Sarai.

Consigned by Haras de Grandcamp, the February-born youngster boasts a strong page, as her dam is a half-sister to international Group 1 winner Pride, who in turn is the dam of the Group 2-winning One Foot In Heaven and the Group 3-placed Queen.

Guy, who signed the ticket as Bloodstock Management Services, said: "I loved her as a physical and loved her movement. She had a very good vet exam and it's a beautiful family behind her. She'll be coming back to the Arqana August Sale next year."

Just two lots later Charles Briere of Fairway Consignment went to €125,000 to secure a filly by Wootton Bassett's best son, Almanzor. La Motteraye Consignment offered the filly, who is out of a half-sister to Beverly D Stakes heroine Sea Calisi. 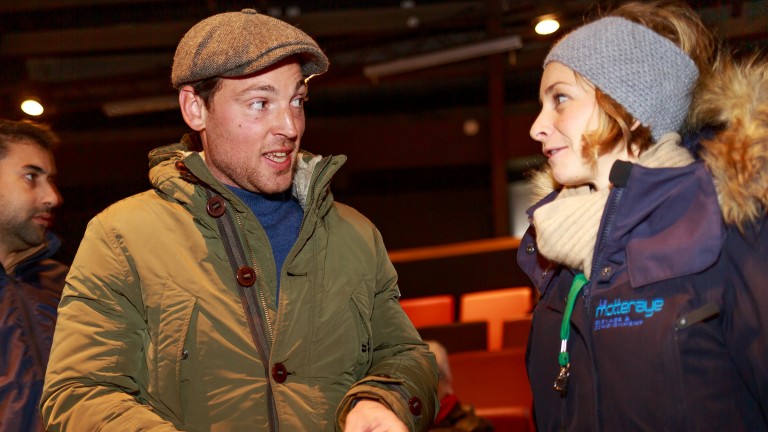 Charles Briere chats to La Motteraye Consignment's Lucie Lamotte
Zuzanna Lupa
"She looked an exceptional mover to me," said Briere. "Almanzor's foals have been very popular and this filly has a nice pedigree too. She'll come back to the yearling sales next year, I don't know yet whether that will be here in August or Newmarket.

"It's the same group of investors I've worked with before - we buy a few foals every year."

Briere's eye for future talent has been advertised this year by Arizona, with the up-and-coming consignor having pinhooked the Coventry Stakes scorer at 65,000gns before he was sold to Coolmore for €260,000 in Deauville.

His latest purchase became the fourth member of Almanzor's debut crop to fetch a six-figure sum, with the list headed by the filly out of Fresh Air who was bought by Ronald Rauscher for €260,000 during the headline session of the sale on Saturday.

The Arqana Breeding Stock Sale continues on Monday at 11am local time (10am GMT).

Date with Too Darn Hot awaits as Frankel Light fetches €1.3 million at Arqana

FIRST PUBLISHED 8:28PM, DEC 8 2019
I wish I'd been smart enough to see how nice the mare was the first time she went through the ring - unfortunately I wasn't!