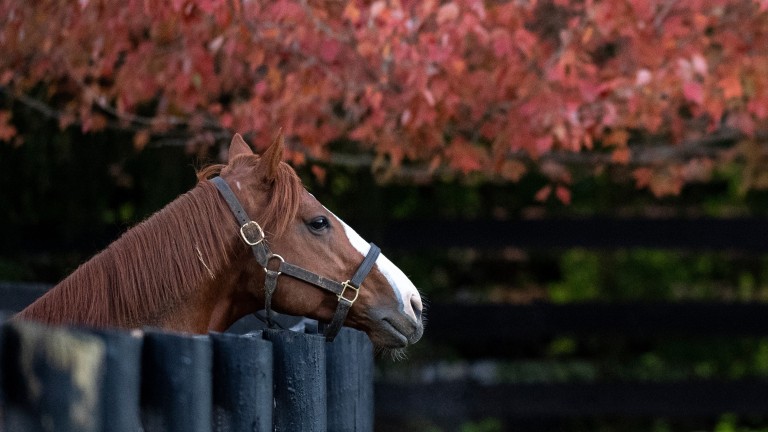 Justify's promising younger half-brother Stage Raider has yet to run in a stakes race in three starts, but looks sure to take the step up to such company following his latest victory at Belmont Park.

In his assignment on Friday, an $89,240 first-level allowance optional claimer, the three-year-old half-brother to the 2018 Triple Crown winner came through a narrow stretch opening and pulled clear for a hand-ridden three-length victory over Civil War.

The Pioneerof The Nile colt, bred and owned by John Gunther, raced a mile on a fast track in 1:38.22 under Eric Cancel and returned just $2.10 for a win wager as the overwhelming favourite.

Tucked along the rail in fourth down the backstretch and on the turn, three lengths off the pace, he was in need of room after coming into the home straight but found it inside of the leader, Purple Hearted, as that one tired to settle for third in the five-strong field.

Nice run up the rail from Stage Raider to win the Belmont 8th. Half brother of Justify with the easy score going a one-turn mile pic.twitter.com/BdfZVXBxMb

Second on his debut over seven furlongs at Gulfstream Park in January, Stage Raider graduated from the maiden ranks with an emphatic success in another seven-furlong contest over a sloppy track at Keeneland last month.

The manner of his Belmont victory will stand him in further good stead, though he was in a somewhat tetchy mood.

Dan Stupp, assistant to trainer Chad Brown, said: "We know he's a talented horse, but he's still an immature three-year-old and has some idiosyncrasies about him. He's a horse with immense ability that we'll continue to work with and improve upon. He'll get better with age,"

Bred in Kentucky, Stage Raider is related to three other winners besides Justify, including All American Stakes winner The Lieutenant. His dam, the Ghostzapper mare Stage Magic, was the 2018 Broodmare of the Year. The most recent of her seven foals is a Curlin yearling filly.

Gunther raced Stage Raider after he fell short of his reserve when bidding stalled at $950,000 at the 2019 Keeneland September Yearling Sale when part of the Glennwood Farm consignment.

FIRST PUBLISHED 10:54AM, MAY 15 2021
He's a horse with immense ability that we'll continue to work with and improve upon