Lucky Vega set to stand in Australia after racing career 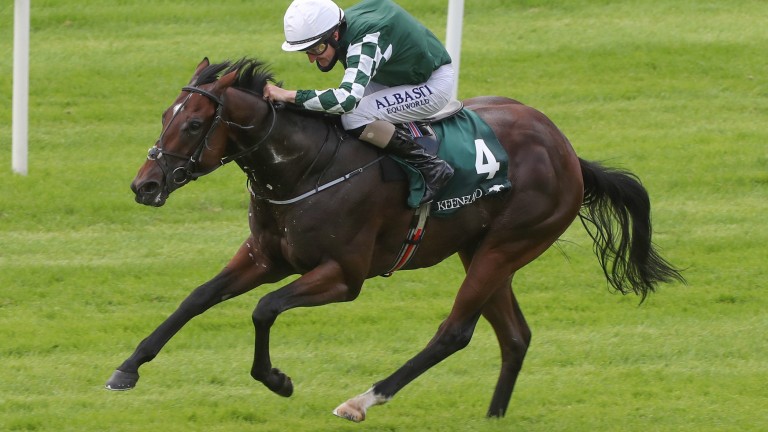 Lucky Vega: "There’s been interest from a couple of farms to stand him."
Caroline Norris (racingpost.com/photos)
1 of 1
By Alex Wiltshire of ANZ Bloodstock News UPDATED 5:34PM, FEB 26 2021

Yulong Investments will look to stand their Irish Group 1-winning two-year-old Lucky Vega on the roster at their Nagambie farm in Victoria this year.

Trained by Jessica Harrington in Ireland, Lucky Vega was an impressive winner of the Phoenix Stakes at the Curragh last year, winning by a three-and-a-half-length margin from Group 2 winner Aloha Star and Royal Ascot-winning two-year-old The Lir Jet.

The son of Lope De Vega ended his two-year-old campaign by running second in the Middle Park Stakes at Newmarket, while he also finished an unlucky fifth when penned on the fence in the Vincent O’Brien National Stakes.

He will join current stallions Grunt and Alabama Express at Yulong, while Blue Diamond Stakes winner Tagaloa and Cantala Stakes winner Yulong Prince will also be added to their roster this year.

Speaking to ANZ Bloodstock News Sam Fairgray, chief operating officer for Yulong, said it was an exciting time for the operation, with Lucky Vega being the first son of Lope De Vega to stand in Australia since the Ballylinch Stud stallion ceased shuttle duties after the 2014 season.

“We have Tagaloa racing in the Australian Guineas [on Saturday] and he'll most likely retire this year and we have another horse, Yulong Prince, who won his Group 1 on Derby day over a mile here, he’s a South African-bred horse and will also retire to Yulong this year.”

Fairgray said it was unlikely Lucky Vega, a €175,000 yearling purchase out of the Goffs Orby Sale, would race in Australia, despite Yulong holding one of the 12 Everest slots to be filled for the spring spectacle while adding the operation has been in conversations with several farms on the prospect of Lucky Vega shuttling to the northern hemisphere following his on-track retirement.

“I would say he’d be a reverse shuttler and do dual hemispheres,” said Fairgray. “We haven’t locked into any farms. There’s been interest from a couple of farms to stand him.

“We’ll just sort of wait and see what happens in his couple of runs [this year] and then when he retires.

“It’s not on the agenda at this stage [to bring him to Australia]. Mr Zhang has an Everest slot, but that goes on into the middle of the breeding season. So, timing wise, if he did race on for another year then, yes, it’s a possibility. But he’s a Group 1-winning two-year-old and the Australian industry loves that sort of horse.”

Lucky Vega’s sire, Lope De Vega, covered four books of mares, the first two years at $27,500 before having his fee reduced to $22,000, when shuttling to Patinack Farm in Australia between 2011 and 2014, resulting in a plethora of high-class performers on track, including five-time Group 1 winner Santa Ana Lane, dual Group 1 winner Vega Magic and Lightning Stakes winner Gytrash.

“To not have [Lope de Vega] back, with the success of those horses, it’s been disappointing that he hasn’t come back. But it’s great that we’re able to bring one of his better sons down here,” said Fairgray.

“There’s Belardo in New Zealand with his first two-year-olds, and they’re going well, but definitely, there’s an opportunity here for us to fill the gap of Lope De Vega in Australia. It’s exciting.

“I think Australian breeders will definitely recognise his racetrack performance but, also, being a son of Lope De Vega, he’s had a couple of very, very good sprinters here the last couple of years in Santa Ana Lane and Gytrash so, with all the Danehill sire-line mares here in Australia, he’ll be very popular.

“He’s a good looking horse as well which will go down well with the breeders.”

FIRST PUBLISHED 2:52PM, FEB 26 2021
I would say he’d be a reverse shuttler and do dual hemispheres