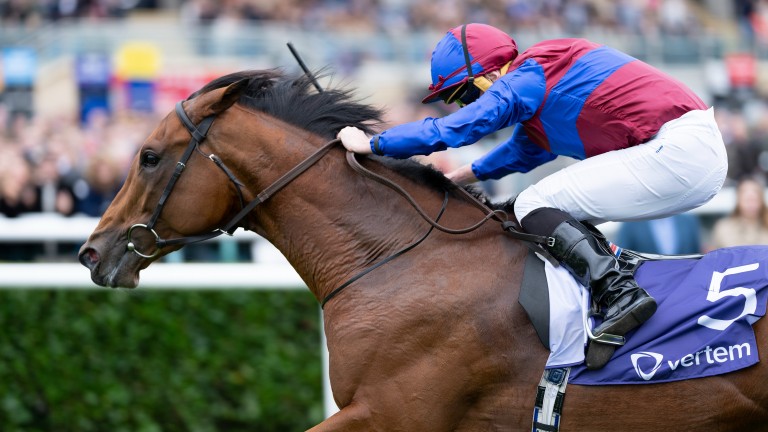 Luxembourg: the son of Camelot impressed when winning at Doncaster
Edward Whitaker
1 of 1
By Kitty Trice UPDATED 6:27PM, OCT 23 2021

It was a case of so far, so good at Doncaster when Luxembourg maintained his unbeaten record with victory in the Vertem Futurity Trophy Stakes, winning a shade cosily in a style reminiscent of his sire Camelot, who took the juvenile Group 1 back in 2011.

Bred by Ben Sangster and picked up by MV Magnier for 150,000gns from Book 1 of the Tattersalls October Yearling Sale, Luxembourg hails from an immediate family that includes Mooresbridge Stakes scorer Leo De Fury, a gelded son of Australia, and 1,000 Guineas Trial Stakes third Sense Of Style.

The two-year-old is the fifth foal out of the Danehill Dancer mare Attire, a placed half- or full-sister to three black type performers including Glorious Stakes victor Forgotten Voice, Prix de Flore scorer Australie and the Listed-placed Keepers Hill.

They are out of the Spend A Buck mare Asnieres, a sibling to Breeders' Cup Classic and Prix d'Ispahan hero Arcangues and Group 3 winner Agathe, who is in turn the dam of Prix de Diane, Vermeille and Ganay heroine Aquarelliste among four black type performers.

The Westerberg, Magnier, Tabor, and Smith-owned colt was providing his sire with a ninth top-level success and a first in Britain, although the son of Montjeu is already responsible for Irish Derby and Oaks scorers in Latrobe and Even So. 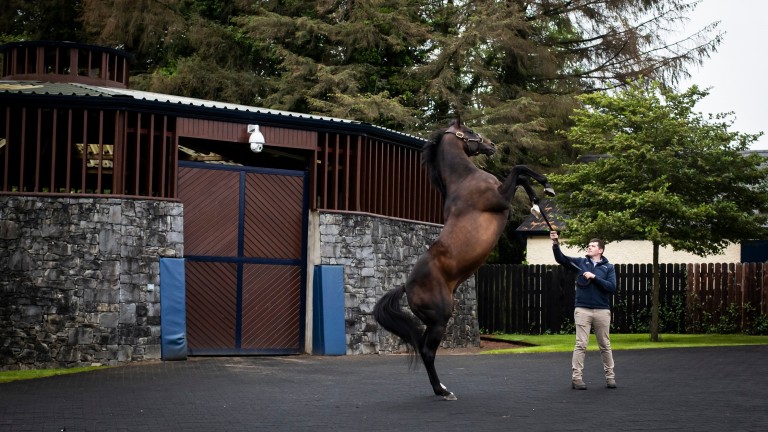 Camelot puts on a show while parading at Coolmore
Patrick McCann

The Cecil and Martin McCracken-bred colt was bought by trainer James Ferguson for just 70,000gns from Book 2 of the October Yearling Sale, a purchase that has paid off in spades with an earlier victory in the Group 3 Prix de Conde to go with his Saint-Cloud triumph.

A brother to Best Solution, who finished second to subsequent Prix de l'Arc de Triomphe hero Waldgeist in this race in 2016 alongside his three Group 1 wins in Australia and Germany, El Bodegon is out of a mare whose dam can count St Leger hero Brian Boru and Soviet Moon, the dam of Derby hero Workforce, among her full-siblings.

The Group-placed Kushnarenkovo, who is out of the influential Alleged mare Eva Luna, is also closely related to Hardwicke and Great Voltigeur Stakes winner Sea Moon and Prix de Royallieu winner Moon Search.

Al Andalyya, who ran five times without success for David Lanigan, was a €100,000 pick up by Rabbah Bloodstock from Hill 'n' Dale Sales Agency at the 2009 Keeneland September Yearling Sale.

She then sold to Cecil McCracken for 10,500gns when consigned by Darley at the Tattersalls February Sale in 2012. The 13-year-old produced a colt by Night Of Thunder this spring and was then covered by Ghaiyyath.

FIRST PUBLISHED 4:17PM, OCT 23 2021
El Bodegon is out of a mare whose dam who can count St Leger hero Brian Boru and Soviet Moon, the dam of Derby hero Workforce, among her full-siblings