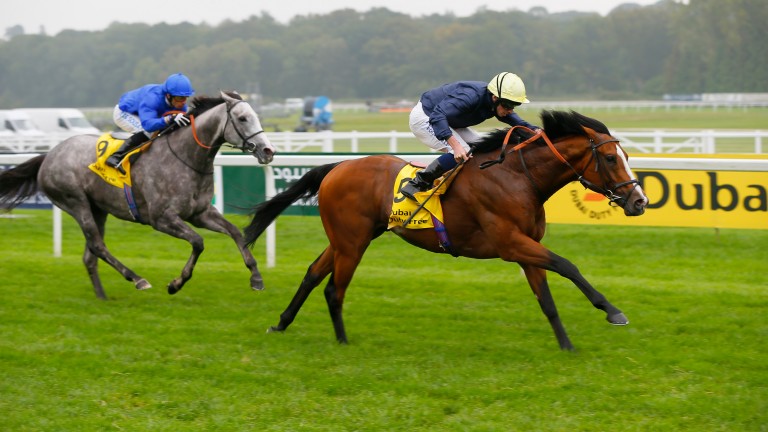 Here he digs out a killer stat on the unheralded Hillstar - subscribers can get more great insight from Martin every Monday to Friday.

With the Vertem Futurity run, I thought it was time I turned my attention to the National Hunt breeding scene. So I went in search of an interesting stat to dazzle you with, and have happened upon a doozy.

That is, that the first-crop four-year-old sire Hillstar has managed to supply three winners under rules from just four starters.

Sherodan, trained by Peter Fahey for owner and breeder Peter McCarthy, was the impressive winner of a Tipperary bumper in July and found only the Joseph O’Brien-trained hotpot Level Neverending too good on his next start at Killarney in August.

Then Hillfinch hosed up by six lengths in a Market Rasen bumper for Stuart Edmunds last month, on her sole run to date.

Another Choice, in the care of Matthew J Smith, brought up the treble for his sire with a brave victory in a Cork bumper this month, having finished placed on his two previous starts. “He’s a nice horse and we’ll have a bit of fun with him,” said the trainer after the race.

Although it’s still early days for Hillstar, those are undeniably excellent results, and all the more commendable for the fact that his first crop comprises just 51 foals – only 12 of whom have been named to date.

It shouldn’t be any great surprise to see the sire do so well, though; he is one of those horses for whom the saying ‘he ticks all the boxes’ was made.

Hillstar has a copper-bottomed pedigree, as a Danehill Dancer half-brother to Prince of Wales’s Stakes hero Crystal Ocean, three-time Group 2 winner Crystal Capella and Listed scorer Crystal Zvezda, out of Crystal Star, a Listed-winning daughter of Mark Of Esteem.

His form also stands up to scrutiny. He was trained by Sir Michael Stoute for breeder Sir Evelyn de Rothschild to win a Leicester maiden at two, the King Edward VII Stakes at three and the Newbury Arc Trial and Canadian International at four. His best RPR of 119 was awarded for his gallant third behind Novellist and Trading Leather in the King George.

Hillstar also has history on his side, as he followed another son of Danehill Dancer into Denis Hickey’s Garryrichard Stud in County Wexford: none other than the ill-fated jumps sire sensation Jeremy.

Jeremy sired only two crops at Garryrichard, dying at the age of 11 in 2014 after suffering an injury during exercise. The six- and seven-year-olds he conceived in that short spell include Appreciate It, Belfast Banter, Birchdale, Black Tears, Happygolucky, Hold The Note, Mister Fisher, Reserve Tank, Scarlet And Dove, Sir Gerhard and The Glancing Queen.

Hillstar still has some way to go to make his name, with a second crop of 43 three-year-olds and a third crop of 54 two-year-olds in the pipeline – by no means large numbers in the context of Irish jumps breeding.

But if he can maintain a good strike-rate with his progeny, and deliver the odd high-class performer along the way, he could very well do it.

Besides which, I tend to think medium-sized crops are no bad thing in reality.

Breeders, owners and agents are generally wise to sires who cover huge numbers but get only a small proportion of good horses, and most will forgive a lack of quantity of representation if there is a compensating depth of quality.

Download the latest issue for all the latest bloodstock news from Australia, New Zealand and beyond, and don’t forget to subscribe for free to have the newsletter delivered direct to your inbox every day.

Sign up to our weekly Asia Bloodstock News publication to receive news and features from all things racing and bloodstock across Mainland China, Japan, Hong Kong, Singapore and beyond. In this week's edition, David Morgan reviews the Group 2 wins for Lucky Patch and Panfield in Hong Kong.

'Prize-money is ridiculous - but racing is a drug so you have no alternative' Buratino to switch from Kildangan to Hedgeholme for 2022 Seven-figure frenzy as Waldlied tops December Mares Sale at 2,200,000gns Nick Bradley turns bargain buys into 1,945,000gns worth of December Mares stars Registrations open for visitors to the Irish Stallion Trail Half-sisters to Advertise and Tattersalls foal sale topper clash at Lingfield