Bloodstock Latest GIANTS OF THE TURF

Coolmore, Darley and the Aga Khan Studs pay their respects to Juddmonte founder 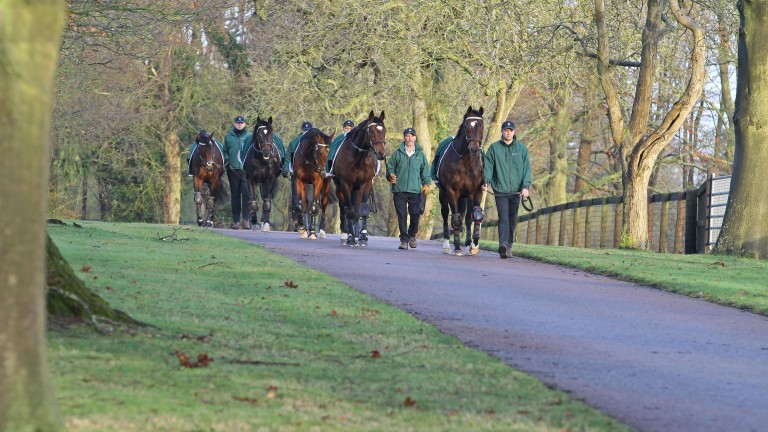 Juddmonte's stallion operation has had a huge and well-acknowledged influence on racing around the world
Laura Green
1 of 1
By Andrew Scutts 4:43PM, JAN 13 2021

Coolmore, Darley and the Aga Khan Studs, three great but respectful rivals to Khalid Abdullah's Juddmonte empire, all expressed their admiration on Wednesday for the great owner-breeder who has died aged 83.

Tom Magnier, speaking at the Magic Millions sale in Australia, where Coolmore bought the session-topping colt by Juddmonte stallion Kingman, said: “It's a big loss to racing. Prince Khalid Abdullah was not only a gentleman, he helped shape our industry.

“If you look back on some of the greatest breeders of all time, he's definitely one of them. The silks are famous worldwide and he has been one of the best.

“We have had Danehill and Frankel and Arrogate win in them. It’s a huge loss for racing, but he's left a remarkable stamp on the industry.”

Darley Stud director Liam O'Rourke said: "Prince Khalid will be remembered not only for his amazingly consistent success in worldwide breeding and racing circles but also for the wonderful legacy he has passed on to the industry, through the influence of his stallions, broodmares and racehorses and, let’s not forget, his management teams.

"They operate a Grade 1 business model which has survived many decades and, like a good wine, has improved with age and is the envy of so many. A fitting testament to a far-sighted founder whose like we may not see again."

"His achievements as a traditional owner-breeder will endure long into the future through the wonderful families and pedigrees he has nurtured over the last four decades."

As well as on the Gold Coast in Australia, there is also a sale this week at Keeneland, whose president and CEO Shannon Arvin said: “Prince Khalid Abdullah was foremost a man of extraordinary class, and the excellence he achieved in thoroughbred racing and breeding globally will continue to influence the breed for generations.

"His Juddmonte Farms is a prominent consignor and buyer at Keeneland sales, where he bought Known Fact, one of his earliest Classic winners, at the 1978 July Selected Yearling Sale, and purchased his champion and Breeders’ Cup Classic winner Arrogate at the 2014 September Yearling Sale.

"Prince Khalid’s distinctive pink, green and white silks have been carried to numerous wins at Keeneland, and we extend our deepest condolences to Prince Khalid’s family and the entire Juddmonte Farms team.”

James Delahooke on the origins of an empire

FIRST PUBLISHED 4:43PM, JAN 13 2021
His achievements as a traditional owner-breeder will endure long into the future