James Thomas reports from the second session of the Premier Sale 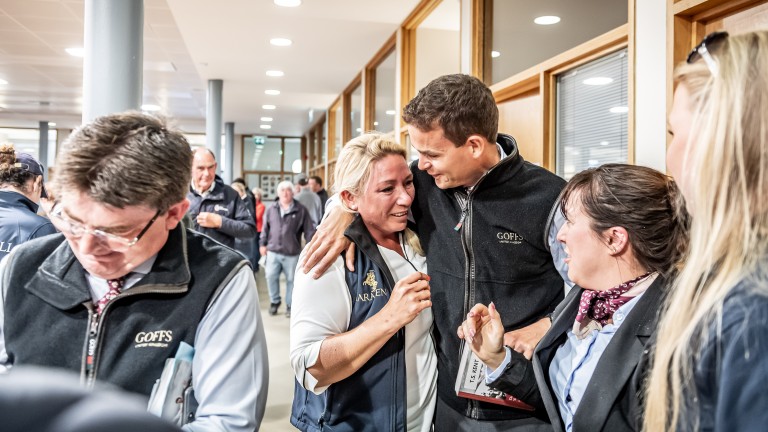 There was an outpouring of emotion after Richard Ryan struck the winning bid of £280,000 for the Wootton Bassett colt who topped day two of the Goffs UK Premier Yearling Sale in Doncaster on Wednesday, with the result proving a welcome tonic for vendor Anna Sundstrom of Coulonces Sales.

The colt was bred by Sundstrom's mother, Maja, who the consignor explained was unable to be by her daughter's side in Doncaster because she was in hospital in France.

"My mum is in hospital today and this is her horse," said a teary Sundstrom, who was accompanied by her daughter Moa. "It's the first time not doing a sale together and this is very much a family thing. She'll be okay, she'll be back here next year, but there are angels watching over us today."

Wednesday's sale is not the first big result the Normandy-based Coulonces team have enjoyed in Doncaster, as Sundstrom sold six-time Group 1 winner Laurens to Salcey Forest Stud and John Dance for £220,000 during the 2016 renewal of the Premier Sale.

"I love this place, it's been so fantastically good to us, right from day one with Laurens," she said. "We're still learning about what type of horse to bring here but we've also had extremely good results on the track. We've been here three years and we've sold a black-type each year from our little draft." 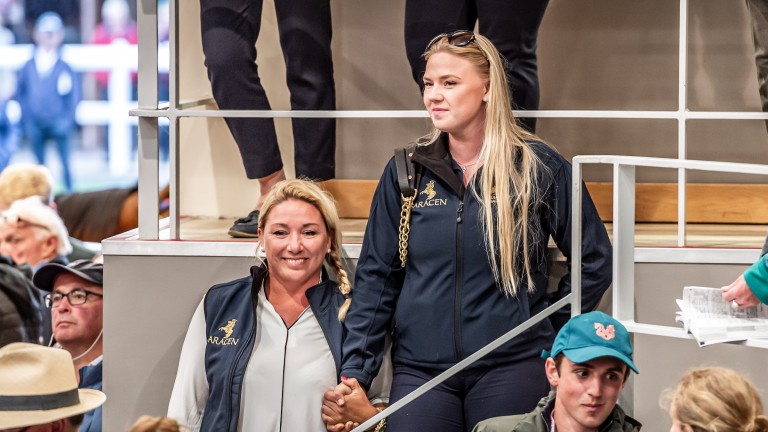 Miss Vendome was initially sold as a yearling for €47,000 but a shrewd bit of business saw the daughter of Medicean brought back into the Hogdala fold at just €10,000.

"He's such an amazing mover, he's beautiful and has such a good nature," Sundstrom said of the session-topper. "He hasn't put a foot wrong since he got here, he never said no to showing, he's just one of those horses. Laurens was the same, those good horses can cope with the stress of the sales. We have a lot of this family too, it's one we really believe in."

The £280,000 Wootton Bassett colt in the Doncaster sales ring
Sarah Farnsworth
Ryan was unable to disclose the identity of his client, but said the colt would head into training in Newmarket with Roger Varian. "He's for an established, successful English owner who has horses in various places in Ireland and England," he said.

"I thought the horse would suit the trainer, he's an exquisite article, a very rare item. In our humble opinion he was the best colt of the day. We were keen on the Kingman yesterday but we're delighted to get this horse.

"The vendors have been successful with Laurens and if we can get anywhere near what she's achieved I'd be delighted."

Angus Gold was just about the busiest bidder in Doncaster for the second successive session.

The Shadwell racing manager secured a handful of the day's more sought-after lots, including a Cable Bay colt out of Bonhomie offered by Highclere Stud for £175,000, the £130,000 Muhaarar colt out of Melbourne Memories from Barton Stud and a £115,000 Adaay colt out of Flemish School consigned by Grangemore Stud.

Those acquisitions contributed to Sheikh Hamdan's operation finishing a street clear on the leading buyers table, with 17 yearlings secured for a total outlay of £2,103,000, a sum that accounted for 11 per cent of the two-day sale's turnover.

Murphy returns to the source of gold

Longways Stables' Mick Murphy was among the pinhookers on the hunt for breeze-up prospects in Doncaster, and he returned to a familiar source of success when he secured the Muhaarar filly out of Fig Roll consigned by Longview Stud for £170,000.

Murphy enjoyed a day to remember at the Goffs UK Breeze-Up Sale in May when he topped the sale with Fig Roll's second foal, the Siyouni filly Al Raya, who went the way of Stroud Coleman Bloodstock for an auction record £450,000.

Al Raya got off the mark at Lingfield earlier in the month and was last seen finishing runner-up to Orlaith in the Listed St Hugh's Stakes.

"I bought her to go breezing, it's easier to find gold where it's been found before, rather than digging a fresh hole!" said Murphy. "I was very lucky with the family last year, this filly is a bigger version of Al Raya but she looks fast. She has big honest ears on her, just like Al Raya too.

"The sire didn't have the fastest start but he wasn't just a precocious horse himself and I still think he's well capable of getting good horses." 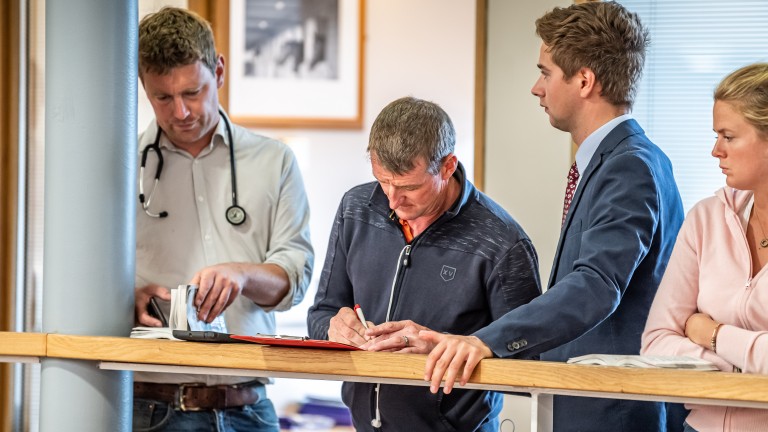 Mick Murphy of Longways Stables signs the docket for the £170,000 Muhaarar filly out of Fig Roll
Sarah Farnsworth
Fig Roll won the 2013 Empress Stakes for Richard Hannon. She is a half-sister to the Listed-placed Tomily and out of Listed-winning two-year-old Cake, who supplied Acclamation with his first ever winner.

"It's a very good trade here," added Murphy. "Doncaster have done a good job and there are some fast looking horses here."

The £170,000 mark was hit earlier in the sale when Mick Kinane, acting on behalf of the Hong Kong Jockey Club landed the Dandy Man colt out of Dream Date offered by Lynn Lodge Stud.

The colt, a brother to Windsor Castle and Coral Charge winner Extortionist showed returned a healthy bit of pinhooking profit having been signed for as a foal by Mags O'Toole at €62,000.

It didn't take long for the six-figure barrier to be broken as Joe Foley went to £150,000 on behalf of Steve Parkin's Clipper Logistics to land a Showcasing colt offered by Rathbarry Stud.

Clipper Logistics have enjoyed success with the progeny of Showcasing before, most notably with Soldier's Call, the Flying Childers Stakes winner who was last seen finishing second behind the explosive Battaash in the Group 1 Nunthorpe Stakes, and Foley said a likeness to the Archie Watson-trained three-year-old was hard to ignore.

"I'd say you could nearly write this one yourself," quipped Foley when asked about the colt's appeal. "He's for Clipper Logistics and he's by Showcasing, who we've had a lot of luck with, Soldier's Call in particular and Lady In France.

"This horse actually reminded me a lot of Soldier's Call and he's out of a similarly fast mare. He comes from a great vendor in Cork, the Woods and Cashman family. He's a lovely colt, he'll come home to Ballyhane to be pre-trained and we'll decide on a trainer in the spring."

Joe Foley with the ticket for the £150,000 Showcasing colt
Sarah Farnsworth
The colt, out of the winning Invincible Spirit mare Blue Aegean, was signed for by Abbeylands Farm at 100,000gns at last year's Tattersalls December Foal Sale, where he was offered by Tweenhills Farm and Stud.

"I think he's very well bought," said Rathbarry's Frannie Woods. "I thought he'd bring a little more because he's a gorgeous colt and he looks like an Ascot type of horse. Hopefully he'll turn out to be an Ascot type for his new connections."

At the conclusion of selling, Goffs UK's managing director Tony Williams said: "We have enjoyed another very successful Premier Sale and once again we have set a new record top price, £440,000, which followed last year's £380,000 record.

"Every year this sale takes another stride forward, it continues to evolve and attract new people and it's something from which we take immense satisfaction. The sale has had an amazing year on the track and that’s instilling confidence in everyone to continue to invest in it and its development.

"Our vendors have taken another step up and sent us some superb individuals and the buyers, who have come to us from around the world, are taking things to a new level in the ring.

"The face of this sale is changing but its heart remains firmly focused on the racehorse and it's something that people are backing and enjoying the rewards that follow. We are indebted to everyone who has supported us, we wish them the very best of luck with their purchases and we look forward to welcoming everyone back to Doncaster for the Silver Yearling Sale tomorrow."

Golden Horde's breeder living the dream as half-brother sells for £260,000

Premier Sale in pictures: faces in the crowd at Doncaster's flagship auction

FIRST PUBLISHED 8:38PM, AUG 28 2019
It's the first time not doing a sale together and this is very much a family thing