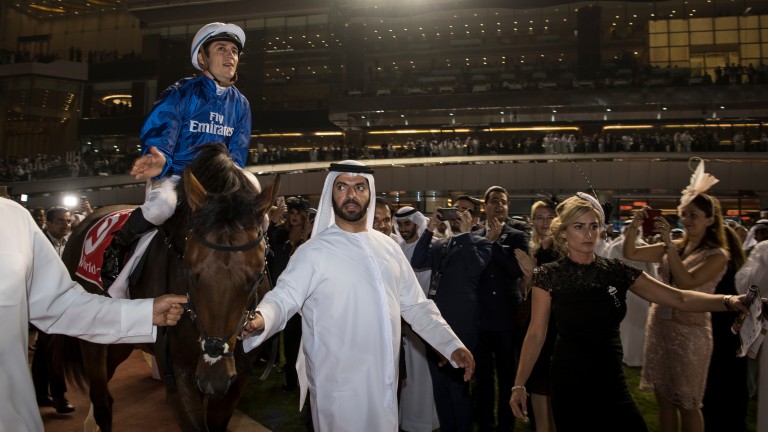 Thunder Snow, who entered the annals of racing in the Gulf when becoming the only horse to have won back-to-back Dubai World Cups, is heading to Darley in Japan for his first season at stud.

Trained by Saeed bin Suroor throughout his career, Thunder Snow was a Group 1 winner at two, three, four and five.

As a juvenile, he built upon a fourth in the Dewhurst Stakes by running away with the Criterium International at Saint-Cloud and returned at three to take the UAE 2,000 Guineas and Derby. Later that year, Thunder Snow posted one of the best performances of his career with a major win in the Prix Jean Prat at Chantilly.

Returning at four, Thunder Snow won the Al Maktoum Challenge at Meydan before dominating in the Dubai World Cup to come nearly six lengths clear. He was placed in the Jockey Club Gold Cup and the Breeders’ Cup Classic before a triumphant return to the desert in March.

Bin Suroor, who paid tribute to his stable star earlier in the week, added: "We will all miss him at Godolphin Stables but he retires at the top and we can look forward to seeing his progeny. I am sure that he will become a top stallion over the coming years."

A homebred for Sheikh Mohammed, Thunder Snow is by Helmet, himself a son of leading sire Exceed And Excel. He is out of the superb broodmare Eastern Joy, also dam of Classic-placed Ihtimal (Shamardal) and Group winners Always Smile (Cape Cross) and First Victory (Teofilo). They are from the same family as Godolphin’s first ever Classic winner Balanchine.

Harry Sweeney, president of Darley Japan, said: "We are enormously excited for many reasons that Thunder Snow is coming to Japan. In Japan, entry into the Classics is largely based on racetrack earnings and Thunder Snow being a Group 1 winner on turf as a two-year-old will impress breeders.

"Furthermore, he was very consistent and won a G1 at two, three, four and five, another trait valued in Japan. And in the JRA, 50 per of races are actually on dirt so Thunder Snow’s prowess on that surface in addition to turf is another great advantage. He ticks many boxes indeed."

FIRST PUBLISHED 3:44PM, NOV 8 2019
In the JRA, 50 per of races are actually on dirt so Thunder Snow’s prowess on that surface in addition to turf is another great advantage