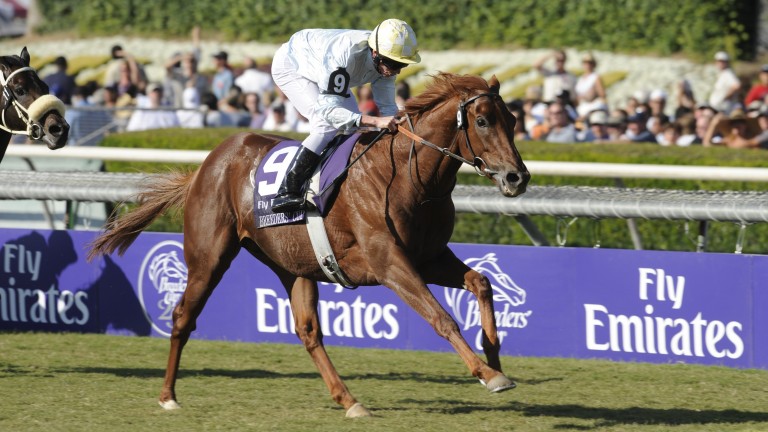 Conduit, a top-class middle-distance performer and Northern Ireland's only thoroughbred stallion, has died aged 15 after a short illness. The son of Dalakhani had stood at Tullyraine House Stud since 2016, with the first six years of his stallion career having been spent at Big Red Farm in Japan.

Tullyraine House Stud owner Hugh Suffern paid tribute to Conduit, saying: "He was an extraordinary horse, I've never dealt with a horse that had the strength of character that he had. He was a very sweet, gentle horse but extremely single-minded too.

"When you watch his races back you can see that resilience in his performances and that steeliness in his character. He's put that into a lot of his offspring as well.

"His record and his performances spoke for themselves - he was a European champion twice, an American Eclipse award winner - and he also had the most fabulous conformation. It would almost take a computer to replicate how perfectly formed his limbs were.

"He was very prepotent and he passed that on to his progeny; he's got a lot of nice stock on the ground. Time will tell how much he'll be missed by the industry but I think he'd have been an influence, for sure." 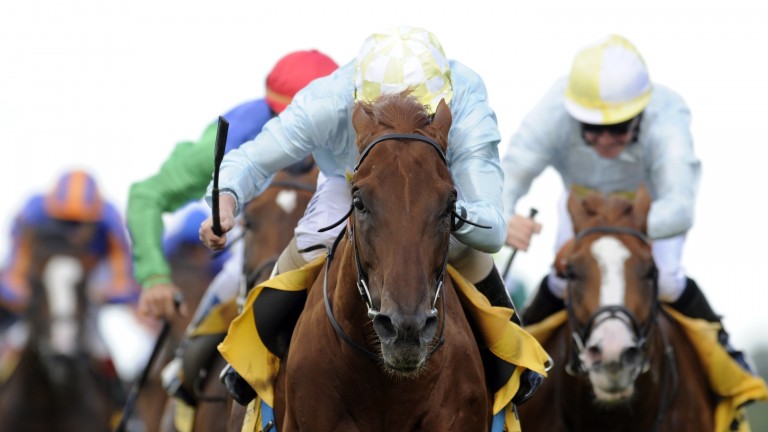 Conduit leads home a one-two for Ballymacoll Stud in the King George VI and Queen Elizabeth Stakes
Edward Whitaker
Suffern added: "Three weeks ago he was bouncing and his usual self, but within a short space of time it became apparent he had suffered a very acute brain injury. He fought very hard for around three weeks but eventually he succumbed in the middle of last week."

Conduit's oldest Irish-bred crop are three this year, and daughter Decora so nearly provided her sire with his first winner in Britain and Ireland when a luckless runner-up at Wolverhampton earlier in the month.

On Conduit's Irish-bred stock, Suffern said: "He has plenty of nice National Hunt three-year-olds. Because of the year we're having with Covid-19 and the uncertainty around the sales, quite a few have already been broken in. He's stamping them well and they're athletic and seem to have a bit of something about them."

Bred and raced by Ballymacoll Stud, Conduit won seven races while under the care of Sir Michael Stoute, and progressed from victory in a humble Wolverhampton maiden at two to become a four-time Group/Grade 1 winner, a record that included historic back-to-back successes at the Breeders' Cup.

His first top-flight victory came in the 2008 St Leger under Frankie Dettori when, despite being the apparent stable second string, he stormed three lengths clear of a field that included Oaks heroine Look Here and Irish Derby winner Frozen Fire. 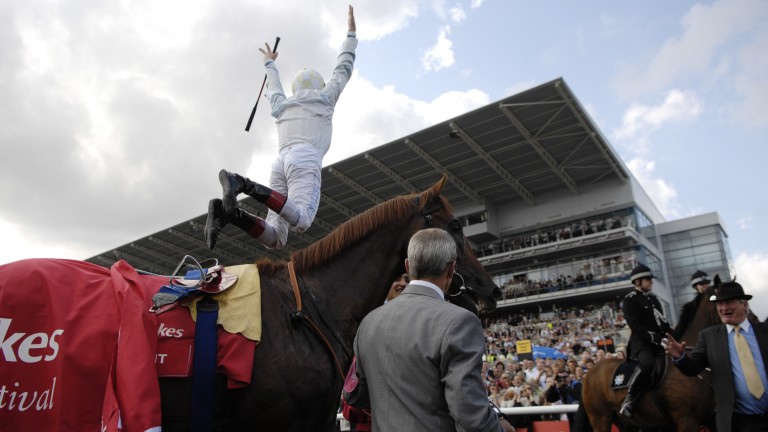 Frankie Dettori performs his trademark flying dismount after Conduit's St Leger triumph
Edward Whitaker
By that point Conduit's career was on a steep upward curve, and a little over a month later he shipped to Santa Anita and claimed the first of his Breeders' Cup Turf crowns with Ryan Moore back in the saddle.

He was one of just two three-year-olds in the 11-strong line-up but proved comfortably the best as he came with a strong late surge to mow down the smooth-travelling Eagle Mountain and score by a length and a half.

He remained in training at four and ran with credit when third, having been dropped back to a mile and a quarter, in the Coral-Eclipse won by the ascendant Sea The Stars.

He was back at his favoured mile and a half on his next start and duly ran away with the King George VI And Queen Elizabeth Stakes, in which he led home a one-two-three for the Stoute yard, and a one-two for Ballymacoll Stud, with Tartan Bearer back in second and Ask a head away in third. 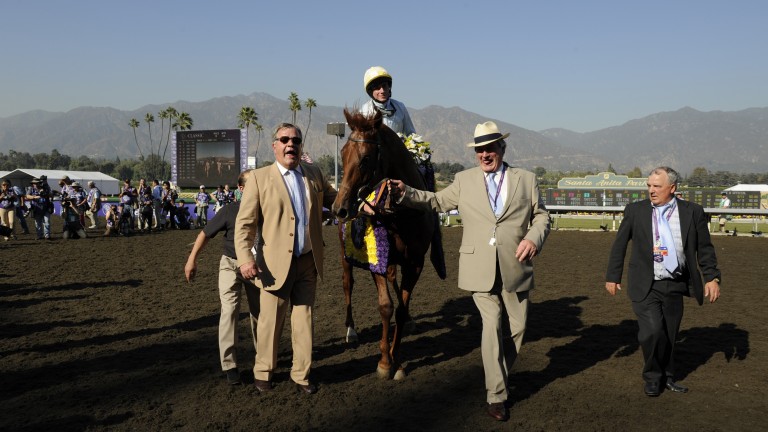 Sir Michael Stoute (left) and Peter Reynolds (second right) lead Conduit back to the winner's enclosure after his Breeders' Cup Turf victory
Edward Whitaker
Conduit was again foiled by Sea The Stars when fourth in that year's Prix de l'Arc de Triomphe, but he went on to create history by becoming the first British-trained horse to land consecutive renewals of a Breeders' Cup race on his next outing.

Having travelled with his usual fluency, Conduit briefly lost his hind legs when he suffered trouble in running as the field, which included Dar Re Mi and Spanish Moon, entered the straight.

But in trademark fashion he found plenty for pressure as his class and courage shone through for a half-length victory over the trail-blazing Presious Passion.

Before his second Breeders' Cup Turf triumph, Ballymacoll Stud had revealed that breeding rights in Conduit had been sold to Big Red Farm, and he brought the curtain down on his racing days when fourth behind Vodka in the Japan Cup.

Out of the unraced Sadler's Wells mare Well Head, Conduit's siblings include Great Voltigeur Stakes scorer Hard Top and Spring Symphony, dam of Arab Moon and Glass Harmonium, as well as Spartan Girl, who is best known as the dam of top-class hurdler My Tent Or Yours.

FIRST PUBLISHED 1:50PM, JUN 17 2020
I've never dealt with a horse that had the strength of character that he had. He was a very sweet, gentle horse but extremely single-minded too