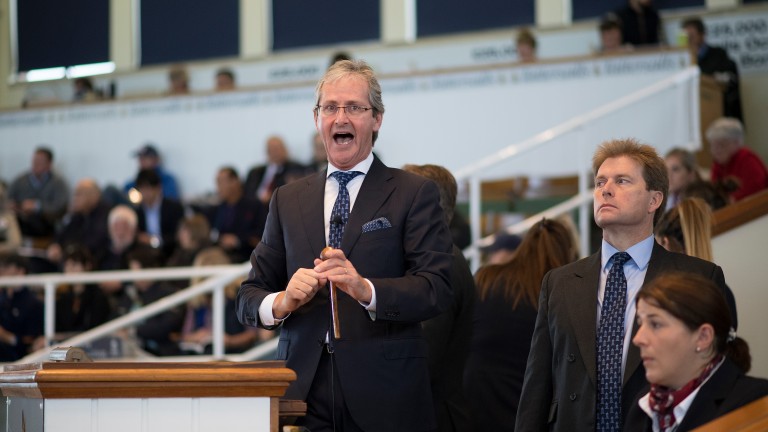 Masks are on, temperatures have been checked and hands sanitised ahead of the annual talent search at Book 1 of the Tattersalls October Yearling Sale.

Few would have foreseen the accoutrements prospective purchasers would require to keep the yearling sales show on the road, but no crystal ball was needed to predict that the standard at this year's Book 1 would be extremely high.

A solitary wildcard entry takes the catalogue to 548 lots before withdrawals. Almost one in ten of those lots is a sibling to a Group 1 winner. There are 16 yearlings by the perennial champion sire Galileo, 19 by his great rival Dubawi, the same number by Kingman, 31 by Frankel and 30 more by Sea The Stars.

Siyouni, sire of Sunday's Prix de l'Arc de Triomphe hero Sottsass, has 20 lots due to come under the hammer.

Such strength in depth duly saw a strong cast of potential buyers braving the element at Park Paddocks on Monday. Some 12 months ago Godolphin secured 19 lots for a total outlay of 17,575,000gns, including the sales-topping half-brother to Barney Roy at 3,600,000gns.

Although the operation has played a smaller part in this sales season, there was a palpable bristle of excitement as the news spread that Sheikh Mohammed himself had paid a fleeting visit to Tattersalls to cast his eye over a few choice lots in the Solario Yard.

Book 1 has also been a happy hunting ground for the Coolmore partners, with the likes of Australia, Camelot and full-brothers Japan and Mogul having been sourced from Newmarket's flagship yearling sale.

Key members of the Irish outfit - including Aidan O'Brien and MV Magnier, who signed for 6,985,000gns worth of yearlings last year - were busy scrutinising the lots on offer on Monday.

US-based buyers have also played a leading role in recent editions of Book 1, and the likes of Mike Ryan, who last year signed for 24 lots for a variety of clients at a total outlay of 6,205,000gns, Justin Casse and Ben McElroy were on the ground.

"Last year was huge as we found Campanelle here," said McElroy, who paid 190,000gns for the unbeaten Prix Morny and Queen Mary Stakes winner. "She was bought for Barbara Banke of Stonestreet Stables, she loves coming to Royal Ascot every year and she wanted to buy two or three fillies who could run there.

"Campanelle looked like she'd fit the bill and she did. After that success, the plan is to come back again to try to find similar types."

Despite the fact more than 2,800 of America's best yearlings having just been offered across the key auctions in Kentucky, McElroy said he and other American-based buyers have a whole host of good reasons to venture across the world in search of future stars. 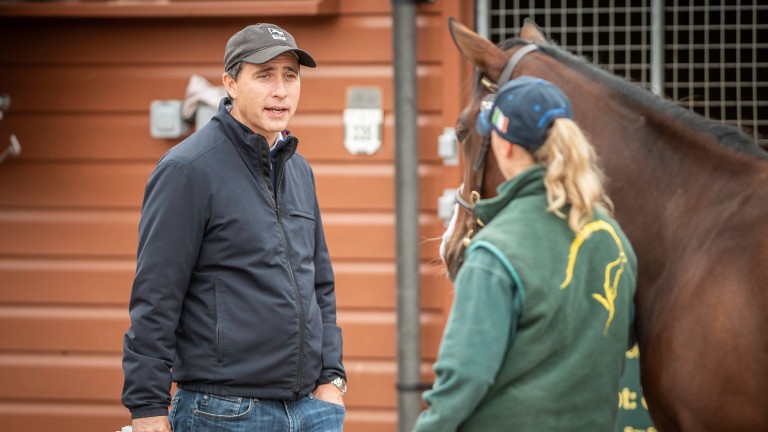 Ben McElroy: "Hopefully for everyone's sake its a strong sale"
Tattersalls
He said: "There are some interesting pedigrees here, there are some great farms in Ireland and Britain who raise some top-class horses and there are also some really exciting stallions such as Kodiac, Invincible Spirit and Kingman who Americans keep a close eye on.

"The world is getting smaller and turf racing is becoming more prevalent in the US. There are good purses on offer so it makes sense to come here and look for those types, as even if they don't make Royal Ascot there's plenty of other racing for them in America."

The effects of the Covid-19 pandemic and associated financial downturn, Brexit and the ongoing paucity of prize-money have, among other things, brought about a marked drop in bloodstock valuations this year.

Vendors seemed only too aware of the prevailing market conditions during inspections on Monday, but with so many well-credentialed lots due to come under the hammer sellers were maintaining a pragmatic outlook.

Newsells Park Stud has been leading consignor by aggregate sales at the last two renewals of Book 1, and when asked for his expectations for the upcoming sessions of selling, general manager Julian Dollar said: "There's a degree of anxiety about how the sales will unfold given the current situation, but in fairness there are plenty of people here and we've been busy showing, which is encouraging.

"How that translates into sales, it's hard to say. But certainly to begin with we'll be being exceedingly realistic in terms of reserves as we're here to sell these horses. We have to try and be optimistic." 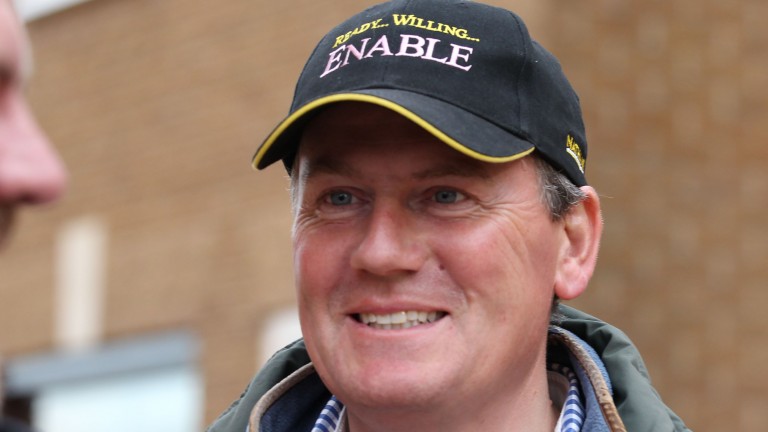 Julian Dollar: "To begin with we'll be being exceedingly realistic in terms of reserves"
Laura Green
On Newsells Park's 24-strong draft, which is headed by a Galileo sister to Japan and Mogul, Dollar added: "The horses we have here are every bit as good as any draft we've brought here before. In fact, in some respects I'd like to think they're even nicer.

"It's disappointing we find ourselves in a situation where the likelihood is prices will be down. But at the end of the day, making good money is part of it, but winning good races is much more important and I hope there are a good few Group winners among our draft."

Dollar also noted that a drop in prices should be a positive for buyers, saying: "We found there were good opportunities during the last recession to buy into nice pedigrees, so if this presents value to buyers and people get in because of that, then that's a good thing in the long term."

Those sentiments were echoed by Adrian O'Brien of Hazelwood Bloodstock, who sold the top lot at Book 1 in 2019, the 3,600,000gns Dubawi half-brother to Barney Roy. 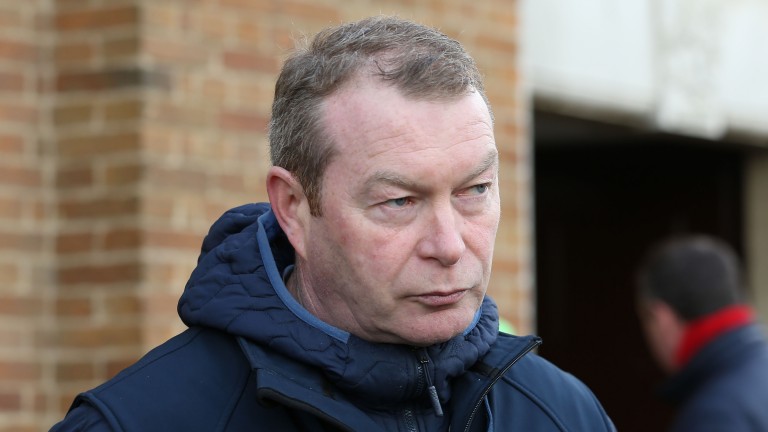 Adrian O'Brien: "It's a time of nervous anticipation at the moment"
Laura Green
"I think the general feeling is one of trepidation," said O'Brien. "It's a unique year and we don't quite know what to expect. I don't think we'll know how strong the market is until the horses go into the ring.

"Last year was a phenomenal year and although we'll continue trying to repeat it, I think market forces might conspire against us. It's a time of nervous anticipation at the moment."

Hazelwood presents a four-strong draft, with a pair of well-related Frankels, a filly out of Astrelle and a colt out of Dolled Up, joined by an "outstanding" Lope De Vega half-brother to Mayhem, Memphis Tennessee and Royal Bench. "He moves beautifully and he's a gorgeous horse; he's just an absolute dude," enthused O'Brien.

"We finish off with a Dark Angel filly out of a full-sister to Hermosa and Hydrangea. Fillies from this family don't come to sale very often so it's almost a unique opportunity for breeders to get into this family."

Although the health of the market remains to be seen, there is no doubt that Book 1 is a unique opportunity indeed.

Lot 55: this Highland Reel colt from Highclere Stud is a half-brother to none other than Palace Pier, who is listed as having landed the St James's Palace Stakes but also beat his elders, including Circus Maximus and Persian King, when claiming his second Group 1 in the Prix Jacques le Marois.

Lot 436: Newsells Park Stud's Shastye already boasts one of the deepest pages in the catalogue, having bred five black-type winners, including dual Group 1 scorer Japan, Secret Gesture and Sir Isaac Newton. The pedigree belonging to her latest public offering, a filly by Galileo, has been enhanced further still, with her full-brother Mogul having landed the Group 1 Grand Prix de Paris on his most recent start.

Lot 500: Owenstown Stud offer this colt from the debut crop of Cotai Glory. His half-brother Supremacy is catalogued as having landed the Group 2 Richmond Stakes but has since proved himself the highest-rated juvenile of the season so far with a game success in the Group 1 Middle Park Stakes.

Lot 510: this Galileo filly from Old Mill Stud is a half-sister to Dream Of Dreams, who has added two victories to his CV since the catalogue was released, namely a seven-length demolition job in the Hungerford Stakes and a first Group 1 in the Haydock Sprint Cup last time out.

The Juddmonte purchase who just keeps turning the page

FIRST PUBLISHED 6:01PM, OCT 5 2020
There's a degree of anxiety about how the sales will unfold given the current situation, but in fairness there's plenty of people here